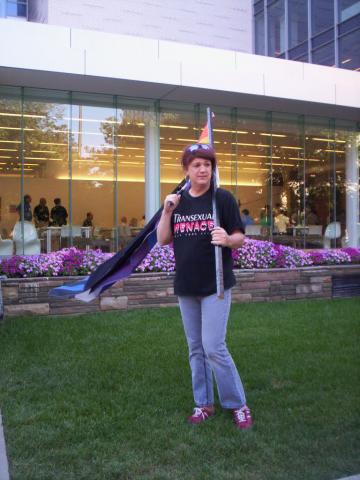 Jerimarie Liesegang, who died of cancer Nov. 3 at the age of 70, was a tireless advocate for transgender rights in Connecticut. She is being remembered online and on the streets with glowing tributes from the Hartford transgender community she helped transform.

Liesegang was active in several national LGBTQ+ organizations before deciding to concentrate on trans issues locally. In the early 1990s, she founded “It’s Time Connecticut,” a precursor of the Connecticut TransAdvocacy Coalition, which hosts an annual “Transgender Lives: The Intersection of Health and Law” conference.

She also founded the political organization Queers Without Borders in opposition to the U.S. positions in Afghanistan and Iraq.

Liesegang was a force behind some of the formative events in the LGBTQ+ history of Connecticut. She marched in the first Hartford Pride parade. She and her wife Anja Schaedler helped start the Connecticut observance of the Transgender Day of Remembrance in 2002, only four years after the first such event happened in Boston and before it spread widely throughout the country.

Her proudest achievement, according to those who knew her, was the amendment of Connecticut Public Act No. 11-55, An Act Concerning Discrimination, adding “gender identity or expression” to the list of what is protected by the act. Liesegang fought for anti-discrimination legislation for trans people for over a decade until it was finally signed into law by Gov. Dannel P. Malloy in 2011.

In a lengthy interview for a Sociology of Gender Studies class at Central Connecticut State University and recorded at mediaspace.ccsu.edu, Liesegang recalled working on a fishing boat in her teens and later becoming a scientist (with degrees from Notre Dame and Harvard). In Hartford, where she blossomed as an out trans woman and tireless activist, she fought discriminatory hiring practices and landed a job at The Hartford Insurance Company, which she held for 20 years.

Diana Lombardi, executive director of the Connecticut TransAdvocacy Coalition says Liesegang was still serving on the coalition’s board when she died. The organization was formed partly as a response to federal legislators who suggested that national change was less likely to happen without local change happening first.

Local playwright Jacques Lamarre, through his connection to the Out Film CT festival, knew Liesegang as a filmmaker. “In 2004, Out Film CT screened her ‘While Paris Was Burning, Hartford Sizzled,’ a documentary about Hartford’s burgeoning drag ball scene in the 1990s,” Lamarre recalls. “It was the last time Out Film CT completely sold out Cinestudio and had to turn people away.

“Separate from Out Film CT and her doc work, I directed her as an actor in ‘They Beat the Girl Out of My Boy … Or So They Tried,’ the transgender section of [Eve Ensler feminist monologue anthology] ’The Vagina Monologues’ at Charter Oak Cultural Center in 2005. She also helped organize and participated in post-show talk-backs regarding trans representation in ‘Hedwig and the Angry Inch’ for Hartford Stage [in the summer of 2003].

“Jerimarie was so sweet and soft-spoken, but she was a potent and fearless activist, too. She was an old-school activist and did so much for trans rights and protections in the state through CT TransAdvocacy.”

One of Liesegang’s oldest and dearest friends in the area, Richard Nelson, helped her finish several documentary film projects this year. “She would be having chemo, so she couldn’t work for a week or so, but would then get back to work. She was amazing. It was always 24/7 with her: juggling a full-time job with the trans advocacy and all the other issues she fought for. I have no idea how she did it. She had a whole bunch of pans on the stove.”

Nelson has a long, engrossing, emotionally charged tribute to Liesegang on his blog furbirdsqueerly.wordpress.com. To explain Liesegang’s activism he quotes Black lesbian civil rights activist Audre Lorde: “There is no such thing as a single-issue struggle, as we do not lead single-issue lives.” To Liesegang, Nelson says, “all issues were our issues. She would work with other oppressed groups. She would say, ‘We cannot wait until the new day, until the revolution is over. We have to fight for the immediate survival issues, but then we have to go further than that.’”

Nelson recalls how, in the fight for the gender identity bill, Liesegang “had to put aside her own personal anarchist beliefs and put on her heels and a nice dress, not the T-shirts and denims she preferred,” to meet with politicians. Also admirable to Nelson: “The weekend Jerimarie spent in jail in D.C. for protesting the conditions at Guantanamo Bay.”

A pivotal moment in their mutual activism came when “we were at an anti-war demonstration in 2002,” Nelson remembers, “and when the speakers talked about the groups opposed to the war they kept leaving out the LGBT community. We brought that up, and a woman said very directly to us, no apologies, that ‘I didn’t know that you gays were interested in anything but marriage.’ I wanted to attack her, but Jeri said, ‘No, we have to show them what we believe in.’ That’s when we formed Queers Without Borders.

An obituary by some of her friends in the LGBTQIA community ran in The Courant on Nov. 10. Besides several entries on Nelson’s furbirdsqueerly.wordpress.com blog, further tributes can be found at socialistresurgence.org, on the Facebook pages of GLAAD, Hartford Gay & Lesbian Health Collective, New Haven Pride Center and elsewhere.

On Nov.18 at noon in Bloomfield’s Filley Park, the Self Defense Brigade will host a live tribute to Liesegang, honoring her as “a fearless warrior for trans people and social justice issues.”

One inimitable, indomitable tribute popped up on a wall in Hartford’s Heaven Skate Park, a bastion of free expression. Painted within hours of the announcement of Jerimarie Liesegang’s passing on Nov. 3, it features a hybrid symbol of transgender liberation and anarchism plus these words: “Jerimarie Liesegang. Transgender revolutionary anarchist. Rest in power.”