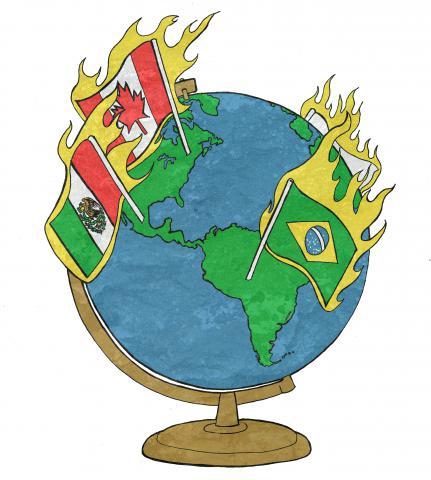 From tvo.org by Daniel Panneton (a public historian and writer based in Toronto. )

While they were few in number in the 1930s, the province’s anarchists played vital roles in a transnational web of activists and intellectuals — and helped develop and sustain the movement

Canada in the 1930s was a lonely place to be an anarchist. Mainstream society had turned its back on anarchists due to their left-wing politics, but so, too, had many Canadian leftists who were concerned by anarchists’ anti-Soviet views. Many believed that the movement’s moment had passed and left to join the newly legal Communist Party. Anarchists faced violence from both the police and communist agents and often had trouble maintaining jobs or housing thanks to unsympathetic employers and landlords. Because of this, they relied on strong mutual aid, communication, resistance — and migration networks that they developed amongst their comrades across Canada and the globe.

Anarchism encapsulates a broad set of ideas rooted in opposing capitalism and hierarchy. One is mutual aid: the voluntary reciprocal exchange of resources and services. Anarchist and former Russian prince Peter Kropotkin wrote in 1902 that mutual aid and support are seemingly so prevalent in the wild that he suspected they are “a feature of the greatest importance for the maintenance of life, the preservation of each species, and its further evolution.”

Though solidarity and non-hierarchy are among its key principles, anarchism itself is routinely conflated with a state of perpetual riot. The anarchists of the 1930s show us, though, that many were drawn to the philosophy not out a desire for violence but because of the safety net and the maintenance of community.

While Ontario’s anarchists were few in number — estimates range from as few as a dozen to as many as 100 — they played vital roles in a transnational web of activists and intellectuals and were essential to developing and sustaining anarchist activity. The committed maintained mutual-aid networks that stretched beyond national boundaries, connecting groups of as small as four or five people with larger hubs abroad. These networks, which included links between such cities as Montreal, Sault St. Marie, Toronto, and Windsor, were used to facilitate migration, produce and distribute literature and propaganda, share funds, and organize speaking tours for famous anarchists like Rudolf Rocker. A well-known example of this network in motion came when Emma Goldman temporarily relocated to Toronto in 1926. She then worked with anarchists in the city to organize tours across Canada, arrange for a publication fund, and maintain contact with anarchists abroad.

Anarchism was a multicultural and multilinguistic movement represented in small pockets across Ontario. The Toronto community was made up primarily of Jewish, Italian, Russian, and Ukrainian anarchists — and a few Bulgarians as well. The Italians mostly belonged to Ill Gruppo Libertario, which maintained strong ties with its Italian comrades in Detroit and Windsor. The Jewish anarchists coalesced around Branch 339 of the Workmen’s Circle, a Yiddish-speaking socialist mutual-aid society known as the Free Society Group. By mid-decade, Goldman had established the Toronto Libertarian Group, which involved members of both the Italian and Jewish organizations, to promote the cause among anglophones.

Given the diversity within the movement, collaboration was not always easy. Goldman founded the Libertarian Group in part because she was frustrated by the fact that several of Toronto’s Jewish anarchists insisted on conducting business in Yiddish. (As one of Goldman’s correspondents gently reminded her, antisemitism was surging at home and abroad. The Jewish anarchists were well aware of what was happening in Germany, so the urge for cultural preservation was strong.)

When language couldn’t unite anarchists, antifascism could — the force created some of the movement’s most effective alliances and actions. In 1938, Toronto anarchists collaborated with local Trotskyists on a wave of direct-action protests in response to fascist organizing. In 1939, they used their networks and contacts to successfully prevent their comrade Attilio Bortolotti’s deportation to Mussolini’s Italy, where he faced certain death.

The cause of antifascism was so central that it pushed anarchists to work beyond the confines of their movement, building bridges with both the radical and the respectable. Many of these alliances and collaborations were unexpected. Rabbi Maurice Eisendrath of Toronto’s oldest Jewish congregation, Holy Blossom, was willing to meet with Goldman to discuss antifascism; Toronto Star reporter Pierre van Paassen corresponded with the city’s circle.

Torontonian anarchists also worked closely with the Trotskyist League for a Revolutionary Workers’ Party to organize direct-action antifascist protests, debates, and meetings in support of the Republicans engaged in the Spanish Civil War. As a result of this collaboration, anarchists, Trotskyists, and members of several other groups established the Provisional Committee for Anti-Fascist Action. This body clashed with the police and Canadian fascists during the summer of 1938 outside meeting halls on Bloor Street and Queen Street, and, most notably, at Massey Hall. The anarchists’ decision to collaborate was an interesting example of autonomy within the movement: despite Goldman’s warnings that they would end up only pulling “the chestnuts out of the fire for the Marxists,” the Toronto anarchists persevered.

By the outbreak of the Second World War, though, the anarchist movement in Ontario was collapsing. According to Travis Tomchuck in Transnational Radicals: Italian Anarchists in Canada and the U.S., 1915-1940, the close-knit nature of anarchist networks meant that personal disagreements or the loss of key members could spell doom for entire circles. Goldman, the lynchpin of multicultural anarchism in Ontario and a vital link to international anarchist networks, died in 1940.

Meanwhile, wartime security measures created an entirely new wilderness for Canadian leftists. The Soviet-Nazi pact sentenced Canadian communists to internment alongside their fascist nemeses at the start of the war — and few Canadians could distinguish between anarchists and communists. In Toronto, several anarchists held a “burning session” to get rid of all “seditious literature,” as local police had been raiding the homes of their associates. Others escaped the shifting Canadian landscape for larger, more established anarchist circles in the United States.

The movement did not totally disappear with the Second World War: relics of it would reappear later, particularly in the 1960s and ’70s, when anarchist thought received renewed attention. But their impact was limited. While the movement exists today, sustained by mutual-aid networks both new and old, 1939, as Canadian writer George Woodcock once observed, was “the year that marked the death of classic anarchism.”