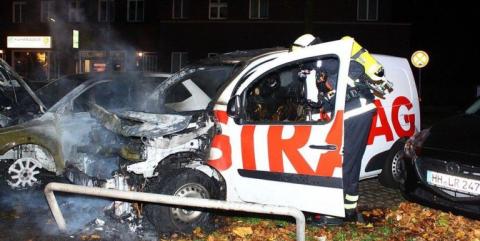 Hamburg: against jails, motorways and those who profit from them

In the night of November 3 to 4, we destroyed a STRABAG utility vehicle on the Sievekingsallee with fire to express our anger against one of the largest construction companies in Europe.

There are many reasons to hate and attack Strabag.

Strabag offers a wide variety of construction services and is one of the leading and largest construction companies in Europe. For example, you can find their logo on every street corner in Hamburg, reminding us that a new office building or other luxury hotel is to be built. We are increasingly suffocated by buildings that make the city even more attractive to financial sharks and business leaders and thus increasingly transform the city into a city of the rich.

The company is also involved in the construction of the A49 motorway and is therefore jointly responsible for the planned uprooting of the Dannenröder forest, that is to say for the destruction of habitats and nature.

The Dannenröder forest has been occupied since October 1, 2019, the occupants want to prevent the approximately 300-year-old forest from giving way to a new highway. More recently, the people there have also gone on the offensive and attacked the cop patrols from the forest.

Elsewhere, its Züblin subsidiary enriches itself with jails by planning and erecting the walls behind which are notably locked up those who oppose themselves to all this shit. In this sense, solidarity with the comrades of the Dannenröder forest and the Park bench three!

The verdict of the trial against the three anarchists in the Park bench trial is expected on Thursday November 5. We call for solidarity and for new attacks.

Against the destruction of all walks of life !
Solidarity with the prisoners!
Freedom for everyone !

On the closure of Kadterschmiede and our handling of open spaces