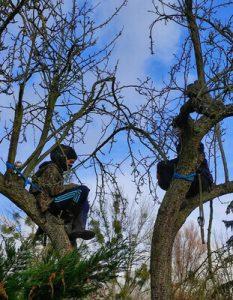 Anarchists from Rozbrat squat in Poznań, together with other groups, have successfully stopped the eviction of neighbouring allotment gardens “ROD Bogdanka”.

The allotments are a part of the city’s green belt and have been used by the community since 1953. For decades, the land belonged to the state treasury. In the early 90s, it was acquired by a somewhat shadowy developers’ company Darex. Darex took out a loan to purchase the land, but then never paid it back while still maintaining their ownership rights. As of today, the company is still listed as an official owner in the land registry records for both the allotments and Rozbrat.

Over the years, the municipality of Poznań attempted to reclaim the land, but so far without too much luck. In the meantime, the land has become a prime estate for developers and dramatically increased its monetary value. The developers, of course, plan to turn it into some form of a posh “regeneration” project and have been harassing both the allotment holders and the squatters from Rozbrat to get them to move on. In the past year, there were reports of arson on the allotments, and Darex has also been threatening the plot holders with absolutely overwhelming financial penalties should they chose to hold on to their gardens. By these methods, they have successfully intimidated many people to leave their plots; however, a few are still remaining.

The attempted eviction took place yesterday morning, when Darex, with the assistance from the police, turned up intending to clear the space to get it ready for so-called redevelopment. This triggered an immediate resistance from anarchists, environmental groups, tenants’ groups and the allotment holders themselves. An impromptu direct action was organised with people blocking the developers and the police from accessing the land. After a stand-off, Darex and the police have given up on their forceful removal attempt: for now at least.

According to the statement released by Rozbrat this morning:

We were ready for the arrival of the businessmen. Thanks to the joint mobilisation of the allotment gardeners, tenant groups and anarchists, it was possible to stop the plan to demolish the existing buildings.

Darex is a peculiar entity: in the past 30 years, it has not run any real business activity. The company appeared in 1990 to “buy” the land of the then state-owned enterprise for one-tenth of its value, take a loan for ten times more and disappear. However, it did not buy the site from the state, but from a private person who also soon disappeared. (…)

Today Darex crooks are back to life. In their shadow, some developers wish to get hold of this part of Poznań, now worth much more than thirty years ago.

In practice, Rozbrat and the allotment holders are on the same cart. Only by joint effort will we free this land and the rest of Poznań from further waves of privatisation. An eventful winter and spring is coming, as Darex is certainly not giving up.

Some squats in Poland: https://radar.squat.net/en/groups/country/PL/squated/squat

how to pull down an obelisk*, from an Egyptologist