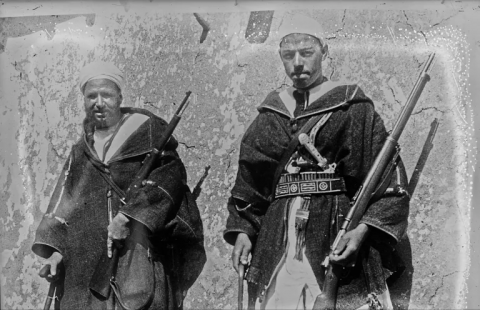 I was approached by Jeff Stein to write up a summary of Abel Paz, La cuestión de Marruecos y la República española so that English-language readers might be made aware of the Spanish anarchist approach to Morocco during the civil war. I would like to thank Jeff for prompting me to write what follows, although he should not be held responsible for its contents or conclusions.

‘A lenient war is a lengthy war, and therefore the worst kind of war. Let us stop it, and stop it effectually […] stop it on the soil upon which it originated, and among the traitors and rebels who originated the war. This can be done at once, by “carrying the war into Africa.”’

The question of why the revolution that accompanied the Spanish Civil War did not result in independence for the Spanish protectorate in Morocco has long vexed its supporters. Guerrilla warfare in the centre of the region (the Rif) had plagued the Spanish authorities from 1909 and had only been suppressed in 1927 following joint military operations by the French and Spanish, involving the indiscriminate use of chemical weapons, and the arrest of the famous leader Abd el Krim. The military conspiracy against the Spanish Second Republic was incubated in this brutalising colonial environment, and Moroccan troops employed in the so-called Army of Africa were crucial to the war effort mounted by the conspirators when their attempted coup stalled in July 1936. Why then was no attempt made to cut off the conspiracy’s vital base by fomenting a recurrence of fighting in the Francoist rearguard? In particular, why hadn’t the anarchist movement, through the powerful union, the CNT, forced this issue during the months of its greatest influence?

Daniel Guerin posed this question of Diego Camacho, anarchist veteran of the underground struggle against Franco and historian of Spanish anarchism (under the penname of Abel Paz) in 1969. The question resulted in a decades-long search for information and documentation that was eventually published in the book La cuestión de Marruecos y la República española (Madrid: 2000). It makes for a gripping read – Paz’s narrative is combined with verbatim copies of his documentary sources and witness testimonies – but ultimately provides only a partial answer to Guerin’s question. In this two-part article I will first summarise Paz’s findings before fleshing out some of the contradictions in the anarchist approach to ‘the Moroccan question’.

Paz’s book contains a dedication to its chief protagonist, Juan García Oliver, the veteran anarchist ‘man of action’ who played a key role in co-ordinating the CNT’s victorious response to the attempted military coup in Barcelona in July 1936. By the following month, García Oliver was the dominant personality in the Central Committee of Anti-Fascist Militias (CCAM), an ad-hoc body in which the CNT participated alongside anti-fascist and socialist parties in Catalonia. According to his own account, García Oliver had long been preoccupied with the question of Morocco and conceived of a rebellion in the Spanish protectorate as key to the success of the revolution. In August 1936 he contacted an old comrade, José Margelí, whom he had bumped into two months before in the company of an Egyptian teacher, Marcelo Argila. García Oliver asked Margelí about Argila, who ‘I assume, being Egyptian, must have connections with the Arab world’, which proved to be the case. Summoning both Margelí and Argila to his office, García Oliver entrusted them with a secret mission to depart for Geneva to contact Moroccan nationalists. A week later, the two men returned in the company of representatives of the newly formed Moroccan Action Committee who, following an exchange of impressions, related García Oliver’s proposals to their fellow committee members. These proposals consisted of a declaration of Moroccan independence and the provision of arms and finances in exchange for an uprising in the Spanish protectorate. At the beginning of September, a delegation arrived in Barcelona with a mandate to begin negotiations in earnest.

García Oliver made every effort to ensure the comfort and respectful treatment of the Committee, who reported their favourable impressions of the anarchist: ‘García Oliver demonstrated complete agreement with us. Even when the independence of the Rif zone was spoken about there was no argument.’ The Committee was mindful of a different obstacle, however, which was that the CCAM in Catalonia could not unilaterally renounce the Spanish claim to the protectorate. Such a decision would have to reside with the government of the Republic, which at the beginning of September came under the premiership of the Socialist Francisco Largo Caballero. Even on this issue, however, García Oliver was reassuring: ‘He even told us that if the central government displayed ill will, then he would go and force it to sign a treaty, threatening it with the withdrawal of Catalan militias from the Madrid front.’

On 20 September, the organisations comprising the Central Committee of Antifascist Militias in Catalonia and the Moroccan Action Committee signed a pact guaranteeing the autonomy of the Spanish protectorate, the military evacuation of the zone and the confiscation of the resources of the rebellious military. A copy was taken to be presented to the Republican government in Madrid by four representatives of the CCAM, García Oliver not among them. There they were received by Largo Caballero, who seemed annoyed that the Catalan body had acted on its own account. Whether or not this was a bluff to disguise broader geopolitical concerns (Paz’s book indicates that the French government had already made manifest its opposition to any gesture towards Moroccan independence), the delegation was given no grounds for hope.

And there the matter came to an anticlimactic end. García Oliver does not appear to have made good on his promise to threaten the central government, and the CNT’s entrance into the Republican government in November did not result in major changes in this direction. According to reports published verbatim in Paz’s book, the biggest impact of the negotiations appears to have been in Spanish Morocco, where Franco was persuaded of the need to grant certain basic freedoms to the native citizenry, such as allowing an Arabic-language newspaper to be published, a practice apparently prohibited in the French zone of the country.

Paz includes as appendices reports from 1938 that demonstrate continued CNT monitoring of the situation in the protectorate and even a proposal for concerted action. In fact, a recently published book by Ali Al Tuma (Guns, Culture and Moors: Racial Perceptions, Cultural Impact and the Moroccan Participation in the Spanish Civil War) suggests there was CNT involvement in an abortive raid of fifty armed men into Spanish Morocco, intended to provoke an international crisis at the time of the Munich Agreement, but which was discovered and quashed in Tangier at the last minute. However, after decades of research, Guerin’s original question has retained a good deal of its original validity. Paz’s book demonstrates the efforts and initiative of one anarchist, Juan García Oliver, in establishing contact with Moroccans. This contact was established through a fortuitous meeting rather than any organisational effort on the part of the CNT (there is an alternative explanation for the initial contact, which Paz deems less likely, involving Trotskyists in North Africa). Another projected anarchist initiative is referred to: that proposed by the secretary of the International Workers’ Association, Pierre Besnard, while negotiations with the Moroccan Action Committee were ongoing. Besnard’s plan consisted of busting Abd el Krim out of his French captivity on Réunion Island. This plan was apparently viewed favourably by leading anarchists Buenaventura Durruti and Diego Abad de Santillán, although García Oliver was less sanguine about its feasibility. In any case, Besnard’s proposals, like those agreed with the Moroccan Action Committee, hinged on a declaration of independence for Spanish Morocco. Besnard was sent off to meet Largo Caballero with the blessing of the Catalan CNT but was given short shrift.

Insofar as the CNT was committed to collaborating with its anti-fascist allies it is perhaps the case that it could not, acting in good faith, attempt to initiate any activity with regard to Morocco without first consulting them. As with other counterfactuals posed of anarchist activity during the Spanish Civil War, it is possible, though hypothetical, that ploughing ahead with whatever revolutionary measures and resources were available at the time and stopping to ask questions later might have proven a more fruitful policy. In the specific case of Morocco, however, the possibility that the anarchist movement was held back by internal failings must also be considered, and this will be the subject of Part Two.

Part Two of this text will be published next Monday.

The Problem of Scale in Anarchism