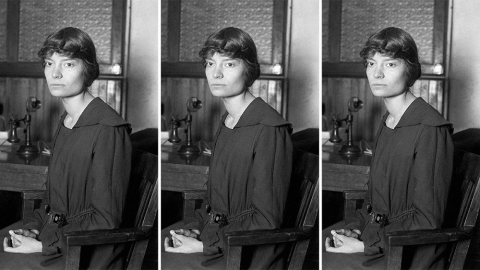 OG History is a Teen Vogue series where we unearth history not told through a white cisheteropatriarchal lens.

Dorothy Day, cofounder of the Catholic Worker Movement, lifelong radical and anarchist, and prolific journalist, died on November 29, 1980, at age 83 — 40 years ago this week. Until her final days, Day was a committed advocate for social justice and pacifism.

Day was born in 1897 to conservative parents, one of five children, in Brooklyn, New York. Later in her childhood, the family moved to San Francisco for her father’s job, and — following the 1906 San Francisco earthquake, which destroyed the newspaper office where her father worked — the family moved again. During her adolescent and teenage years in Chicago, Day was fascinated by Catholicism; her parents weren’t practicing, but she found herself animated by the words of the Gospel and their call to center the poor and marginalized. At the same time, she read voraciously, and was especially a fan of Upton Sinclair’s The Jungle, which exposed the dire conditions for Chicago meatpacking workers and immigrants.

“[Day] was a very rebellious young woman, which was an extraordinary thing for her time in terms of coming from a conservative Republican family,” says John Loughery, co-author of the recently released biography Dorothy Day: Dissenting Voice of the American Century. “I think she felt, in a political sense, invigorated by the world.”

By the time she dropped out of college and moved to New York City at 18, Day was an avowed leftist and anarchist. She became a journalist for socialist newspapers like The Masses and The Call, where she mingled with the communists and socialists of the day, even interviewing Russian revolutionary Leon Trotsky at one point. “[Day] didn’t come from a family of really wealthy or privileged means, but in college and as a younger adult, she started to write and she felt like she could contribute by writing articles for different left-of-center publications dedicated to social justice,” says historian Vaneesa Cook, author of Spiritual Socialists: Religion and The American Left.

Day was engaged in organizing for labor and social movements; she was arrested and jailed for the first time at a 1917 Suffragette protest in Washington, D.C. During this period, Day’s faith and politics continued to be in conversation, although it was unpopular in radical circles to identify as Catholic, a religion that seemed deeply antiquated in the 1910s and 1920s.
WATCH
Whitney Port’s Teen Vogue Photo Shoot
More Teen Vogue Videos

While in her 20s in New York City, Day got an abortion for a pregnancy conceived during an ill-fated relationship, from an ex-boyfriend of anarchist Emma Goldman, which she wrote about in a semi-autobiographical work of fiction called The Eleventh Virgin. Soon after, she also went through a divorce. She also reflected on these choices, which flew in the face of established church doctrine, in her extensive non-fiction writing. Day’s complicated relationship with her faith endured as she aged, and by her late life, she became a dogmatic follower of church rules. “Religion for her had to be life-transforming and disruptive of your life if it was going to mean anything,” says Loughery.

Day sought to force the church to be accountable to living in Christ’s name, focusing on the marginalized and anti-poverty work, instead of on specific practices like abortion. Ultimately, Day committed herself fully to Catholicism as an organizing principle for her political beliefs. In 1933, during the height of the Great Depression, Day founded the Catholic Worker Movement, with Peter Maurin, with the release of their first periodical, sold for a penny (which is still in circulation, still for a penny). Day began to open Catholic Worker “houses of hospitality,” maintained completely by volunteers, which sought to provide food, shelter, clothing, and any other needed resources for those impacted by poverty. Their practice was to refuse no one.

While the Catholic Worker houses were practicing direct service, Day made clear that structural injustices must also be fought. In addition to providing immediate relief to those suffering, the Catholic Worker houses were a space for activism. In the 1950s, Day and other anti-war protesters organized against civilian drills during the Cold War. “We will not obey this order to pretend, to evacuate, to hide,” read the pamphlet distributed by Catholic Worker activists. “In view of the certain knowledge the administration of this country has that there is no defense in atomic warfare, we know this drill to be a military act in a cold war to instill fear, to prepare the collective mind for war.”

Throughout her life, Day lent her support and voice to a variety of social movements, including joining Cesar Chavez’s labor strikes on behalf of California farmworkers in 1973 at age 76. She was arrested and jailed for her civil disobedience.

To this day, Catholic Worker houses across America remain engaged in the social activism that Dorothy Day promoted throughout her life. In 2019, the Iowa City Catholic Worker house provided asylum-seekers with safe harbor after working for their release from immigration detention. Day’s influence is seen within the broader Catholic social justice community. One of Day’s granddaughters, Martha Hennessy, 65, was sentenced to prison on November 13 for her involvement with the Kings Bay Plowshares 7, a group of Catholic pacifists and Catholic Worker members that broke into a naval base in 2018 in protest of its stockpile of nuclear weapons.

And as mutual aid organizing has swept the United States during the COVID-19 pandemic, these community-oriented support systems carry on the tradition Day promoted of taking direct responsibility for other humans. “[Day believed] government programs, while they might be necessary and very useful, they’re not a substitute for the dignity that she was saying was essential for humans to give to one another,” says sociologist Sharon Erickson Nepstad, author of Catholic Social Activism: Progressive Movements in the United States.

“[Day] looked upon American society as a monumentally ego-driven society…. Most of her life was spent in trying to figure out how to get away from that sense of ego,” says Loughery.

In 2015, Pope Francis mentioned Day in a speech, which popularized the campaign for her sainthood, which Day herself may have resisted. “What we know about [Martin Luther King Jr.], once he became a civil saint, people began using his life and his legacy for purposes that aren’t always in line with what he advocated,” says Nepstad. “I think one of the reasons that she’s so appealing to many people is precisely because of her humanity, not her sainthood. She was someone who had a history that didn’t fit neatly within the Catholic Church, and was someone who I think demonstrated the value of being both really committed to ideals, but always embracing critical thinking.”