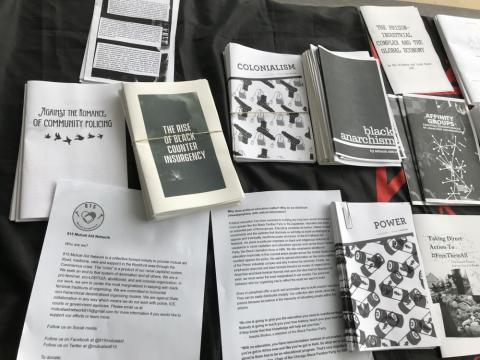 The 815 Mutual Aid network is a Rockford, Illinois based collective that works to deal with the COVID-19 crisis through mutual aid efforts. According to their Facebook page, the collective is anti-capitalist and focuses on organising through black feminist traditions. The network provides food, medicine, political education, and other support and is now putting out a newsletter. Recently, the collective has worked to improve conditions for inmates in Winnebago County Jail, collected donations, distributed food, and helping with tornado recovery. The Commoner had the privilege of speaking with several people from the collective. Some of the topics covered included the reasons for the collective’s formation, the issues with organizing during a pandemic, and its work for inmates in Winnebago County jail. You can visit their Facebook page here, and their Twitter profile here.

How did 815 Mutual Aid Network come to be?

Atticus: We formed around trying to do mutual aid from an explicitly anarchic abolitionist anti-colonial political lens in Rockford as many of the mutual aid groups forming in our area were liberal. We want to build a larger revolutionary political analysis and organization. Small cities are often discounted by revolutionary movements so we felt a need to build our own political analysis. While our focus is mutual aid, we are not constrained by that and we see ourselves as a part of larger radical social movements against capitalism, the state and the colonizer. We were influenced by mutual aid done by the Anarkatas in NYC, Maroon Movement in DC and the Black Panther Party in Rockford.

Franklin: As far as I know, we were anticipating the coming failures of the state to adequately provide for the people. We saw this as an opportunity to aid and empower our community to survive the pandemic and social strife brewing in Occupied Turtle Island.

What part do you hope to play in the anarchist movement?

Atticus and Franklin: We’re not an explicitly anarchist project although we have anarchist members. We try to have some anarchistic values such as horizontal organizing, decentralization and anti-oppressive politics. Our politics are located in decolonial and black liberation frameworks which is different from much of the anarchist movement which comes from European anarchism.

What do you think of the current surge of mutual aid groups in the Covid landscape? Do you think it will have a positive effect on the anarchist movement?

Franklin: Mutual aid, not being exclusive to anarchists, will help empower a variety of communities. It’s great to see people organizing under their own power. The effects it has on the anarchist movement will be heavily related to the quality of the relationships we build.

Atticus: It is important for us that mutual aid is not co-opted by the nonprofits. Mutual aid is a revolutionary concept. It is about building new social relations outside of capitalism and challenging power. It is not charity.

Chewy: When I noticed different mutual aid networks popping up I thought to myself, YES! I have a hard time understanding why the government makes it so hard for people to get help, outside of covid. There are immigrants, disabled, LGBTQ, and incarcerated people that were struggling before covid and will struggle after and these people need mutual aid. I appreciate people seeing the NEED for mutual aid due to covid, I only hope and pray that it continues after. I see this as a positive for the anarchist movement because it helps people to steer away from this need to rely on the government for needs that are not guaranteed to be met.

You call yourselves an ‘anarchic decolonial collective’, what does this mean to you? Do you think the anarchist movement could stand to be more decolonial?

Atticus: It basically means that we have anarchic or anarchistic orientation or values but we are not anarchist as some of our members may not identify explicitly as anarchists although some of us are. In terms of de-colonial, we try to frame our radical politics in a way that centres Black, brown and indigenous people and those liberation histories especially in regards to land. In the anarchist movement in the United States many of the ideological influences come from European anarchism so it is very colonial and class reductionist. It is imperative that anarchists move away from class reductionism and European theorists as the only possibility of radical politics. Decentering whiteness in anarchist movements is vital. A good text to read on this is “The Progressive Plantation” by Lorenzo Kom’boa Ervin which has deeply influenced our collective. Most of us had prior experiences with toxic white radical spaces so we have endeavoured to make sure 815 Mutual Aid Network is not that.

How do you organise yourselves, who makes the decisions?

Atticus: We make decisions collectively in our collective meetings. We emphasize self-criticism and self-reflection in order to develop a politics that is constantly changing and accountable. People organize and do tasks with their own free association. There is no leader in the traditional sense. However, we encourage people in our collective to take leadership on their own projects and initiatives.

How do you interact with your community/ies, and what specific problems do they face?

Chewy: Prior to the second wave of Covid we set up food distribution and free clothing stores in parks in the underprivileged neighborhoods in our communities. We also set up group political education with social distancing, in parks and masked up. We noticed that a lot of problems our community faces starts with our local government. There are not a ton of resources for child care, community centers or after school programs for the teenagers of Rockford. We have noticed with a lot of Government buildings closed that people are relying on our collective with help for Bill payment, food and winter clothing. These are basic needs that we see people struggling with.

What are some of the biggest issues that you have faced as a group, and what have you done/are you doing to move past them?

Franklin: finances and other projects taking precedent has been the most restrictive part of organizing. The other projects have cooled off allowing us to return to our normal practice, although we should try to prevent future interruptions as the situation here is worsening with covid and the possibility for civil unrest still looms. As for finances, we’ve been fortunate with recent donations but still are working on creating a more sustainable model outside of the colonial system.

What have your interactions been like with the local/state government?

Franklin: Phone zaps. Otherwise, we prefer not to interact or work with the colonial governments.

If you had any advice for people trying to make an organisation like your own, what would that be?

Atticus: Start with a small trusted group, hold each other accountable, and build a collective set of values. Serve the people, do political education and help catalyze a larger autonomous movement.

You have noted that you are fighting against the treatment of prisoners in Winnebago County Jail? How are you approaching this, and how do your methods differ from regular organisations?

Atticus: We organize alongside prisoners and family members of prisoners in the jail. We provide support for them through our commissary fund. We have mailed information into the jail. We differ because as an abolitionist organization we do not see ourselves in a savior role for people in the jail as some non-profit organizations that work with incarcerated people.

Chewy: We are also hoping to find ways to educate those jailed at Winnebago County Jail, we acknowledge that many of them are not receiving adequate legal representation nor access to physical books. With the pandemic causing so many unforeseen circumstances, we have also tried to stay updated on procedures in place to keep the prisoners safe. We have been utilizing phone zaps to also try and put pressure on the city and county officials to create better conditions in the jail.

You mention that your members have previously worked with groups that are not specifically anarchic, such as the Black Panther Party. Would you then say it is important to be more flexible in which groups you work with, even if their ideologies do not fit entirely with your own?

Franklin: I can’t speak for others, but I didn’t start off where I am now politically. Part of that growth process was interacting with those outside of my line of thought. If we didn’t work across ideological bordershow would we reach the greater community?

Atticus: We build with the people. Although within our collective, we place emphasis on shared political vision, this does not constrain our work on the ground.

Do you plan on coordinating with and/or joining with other groups or organisations?

Atticus and Franklin: We’ve already collaborated with other groups though nothing in a formal capacity. We would like to collaborate with more revolutionary groups on building long lasting mutual aid networks.

Chewy: Due to the virus I feel we are limited, but the connections we have made over the summer have proven to be useful. We have all recognized that the need for different tactics, different thoughts, all while working towards a common goal is critical to the mutual aid movement.

Thanks to Micah Leith for the introduction to this interview.