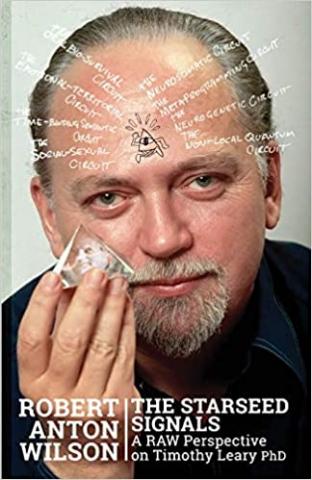 From C4SS by Chad Nelson

“To remain in the neuro-semantic insanity of larval society, without laughing hysterically or otherwise giving away the secret of one’s mutation, is the path of the Bodhisattva, who, like Father Demian going to live among the lepers, steels himself against the risk of contagion and returns to the madhouse of Circuit I-IV humanity.” –The Starseed Signals, p. 372

What a gift to receive new material from Robert Anton Wilson, more than 13 years after his passing. Originally written in 1972, The Starseed Signals brings together many familiar themes we see throughout his subsequent work: Timothy Leary’s eight circuit model of consciousness; model agnosticism; Wilson’s autobiographical account of 1960s and 70s counterculture; skewering political and cultural commentary; and the possibility of higher intelligence, space migration, and life extension. I had high hopes for Starseed Signals, and it did not disappoint.

I think Starseed is Wilson’s most accessible explanation of the eight circuit model of consciousness (more aptly, the eight circuit model of the human nervous system). Wilson’s 1983 title, Prometheus Rising, represents what I would describe as a more refined, albeit advanced, take on the model. Having now seen Wilson’s treatment of the theory in a number of forums, and in a variety of ways, over the course of several years, I think I finally grok all eight circuits. Let me take a stab at a high-level overview of the theory, for those unfamiliar.

Each of the eight circuits of consciousness is a sequential step in the evolution of your own mind. They are like rungs on a ladder that climb toward the upper echelons of human consciousness. The higher one’s circuitry, the less one operates as a reactionary robot. As individuals reach higher circuits (circuits 5 – 8), they are shocked by how programmed and primitive they behaved at preceding levels. Most people never learn to operate beyond a circuit 2 or 3 level of existence.

It is only after understanding how our animalistic circuit 1 – 4 nervous systems are subtly imprinted and conditioned, says Wilson, that we can begin to transcend them and reach higher forms of consciousness. Those who “drop out” of polite society upon experiencing an iota of freedom at the drug-induced circuit 5 stage are missing out on the good stuff. Circuits 6 – 8 are where true enlightenment and earthly transcendence is achieved.

To the reader who calls New Age bullshit, I cite Wilson: “If the theories suggested in this book are not plausible, what alternative theories can be proposed?” If you are content with the human rollercoaster of anger, manipulation, sadness, subordination and all of the other maddening life scripts we choose to act out, then by all means, enjoy the ride. But for those seeking the Übermenschian path purportedly found by rebels throughout human history (Jesus, Buddha, Leary, etc.), Wilson offers a way.

Starseed was a “found” manuscript, so parts of it are a raw product, which I enjoyed. I felt like I was privy to the thought process behind some of the central themes of Wilson’s life’s work. There were moments where I wondered if I was reading an identical passage from earlier in the book, but didn’t care. Much of what he presents is the kind of material you need repeated multiple times before it really sinks in. It may also be that I read some of these passages in Prometheus Rising, as elements of Starseed wound up incorporated into it. Starseed isn’t just an exposition on Leary’s eight circuit model though. It’s equally a tale about Wilson’s complex relationship with Leary and the madness and paranoia of the early years of Nixon’s Drug War.

It felt at times like a new entry in the Gonzo Journalism canon. It reminded me stylistically of Mailer’s Miami and the Siege of Chicago, in that it is, simultaneously, an evocative, outside-the-mainstream, firsthand account of very specific time and place controversies and legitimate reportage. I love the mayhem of the 60s and 70s as seen through the eyes of stoned reporters, and find Wilson at his finest when he goes there. He seemed to live as fascinating and diverse a life as any of the other more recognizable subversives of that age. It’s not the first time Wilson recounts tales from that era, but it’s the most in depth we’ve received from him aside from his Cosmic Trigger trilogy.

As great anti-authoritarian writers do, Wilson fills Starseed with ample amounts of cynicism, skepticism, and anarchism. An audacious move for an author asking for your buy-in to try something as far out as reprogramming your own brain:

“Since Roosevelt lied about Pearl Harbor, Truman about his friends’ stealing, Eisenhower about the U-2 spying plans, Kennedy about the Bay of Pigs, Johnson about the Tonkin Gulf, and Nixon about everything, and since between them they probably ordered more people killed than Genghis Khan, what is the precise difference between government and criminal conspiracy?”

Wilson’s audacity works, however. Once you stop believing in the false gods manufactured by society – politicians, clergymen, teachers, bosses, and other “leaders” – and begin to understand that you yourself are a God, Wilson’s anarchistic style becomes an essential ingredient in your neurogenetic growth.

Make no mistake, Wilson is not trying to become your guru in Starseed. Readers already familiar with his work know that is not his style. We get plenty of intimate, humanizing details about Wilson’s own personal fears and follies, and a good dose of humor to go with them. Nor does Wilson come off as a wannabe High Priest of the Drug Cult, as you might expect from a friend and advocate of Dr. Leary’s. Despite clearly extolling the virtues of acid, Wilson isn’t gratuitous about it. He makes clear that drugs are a useful tool, a change agent, to use as part of one’s deliberate attempt at brain change. Occult schools throughout history have discovered other equally effective change agents, as he carefully documents. Neither is he annoyingly clinical about drug use though. If you’re a sucker like me for Fear and Loathing-style drug escapades, you won’t be completely disappointed:

“By mid-1963, I had logged 40 trips and it was obvious to me that peyote was, indeed, a magical chemical, as the Indians claim, but that one had to be a true magician to know how to use it profitably. I don’t intend to recount my 40 peyote trips in any detail here…[b]ut a change in my mind (my ‘neurological functioning,’ Leary would say) was, slowly and subtly, beginning to happen.”

I will conclude with a few personal notes. As a RAW aficionado, I study the Wilson oeuvre like Wilson studied Joyce’s. I pour over his fictional work in the most microscopic fashion, searching for the hidden gems Wilson camouflaged with his Zen-like prose, the way mystics do. Starseed helped me uncover a few more of his secrets that had eluded me. That alone was worth the price of admission. But Starseed was far more than that. It was optimistic, inspiring, and self-help-y in actionable ways. All qualities I have come to expect from the best of Wilson’s work. Starseed challenges you to aggressively interrogate the most unquestionable societal taboos, and identify your own robotic behaviors so that you may escape the socially-programmed reward-punishment matrix. Not for purely selfish reasons, but so that you may become a modern-day bodhisattva, something the world desperately needs more of right now.