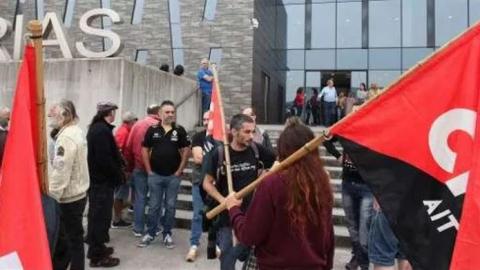 from Spanish Revolution via The Free Online

“They ask the union for almost 600,000 euros and jail sentences for the complainant worker and union members, a total of 8 people,”

It all started with different labor irregularities and an alleged sexual harassment at work, a complaint currently filed. A worker went to the union at the beginning of 2017 to comment on what was happening to her at Pastelerías La Suiza, in Gijón. ” ..The union requested additional information to support the version of the worker, after which, it met with the company to discuss the issue, unsuccessfully which led to the beginning of a union mobilization campaign and several concentrations of complaint were held, “nothing that is not usual in union action,” the unionists declare.

However, “the attacked women became aggressors from one day to the next, when denounced by the businessman on numerous occasions,” the CNT denounces. “They ask the union for almost 600,000 euros and jail sentences for the complainant worker and union members, a total of 8 people,” they detail from the anarcho-syndicalist central, “some penalties that are beyond all logic.”

Behind the claim that asks for years in jail for unionism allegedly could be the Gijón hotel trade union, people with a clear conservative orientation, who “have accused the CNT of extorting, of being ETA, and have tried to outlaw the union for a crime of illicit association ”.

In fact, they have hired, as a lawyer to exercise the private accusation against the union, the former magistrate of the National Court, Mr. Javier Gómez Bermúdez, “star judge and now Jaime Botín’s lawyer”, highlights the anarcho-syndicalist organization.

“This case is another step in the outlawing of trade unionism, either directly or by putting trade unionists in jail and financially condemning them,” denounces the CNT. For this reason, they appeal to class solidarity and the fraternal support of all the trade union centrals, in order to try to stop this aggression and to disseminate as much as possible what is going to be judged as of Monday 18.