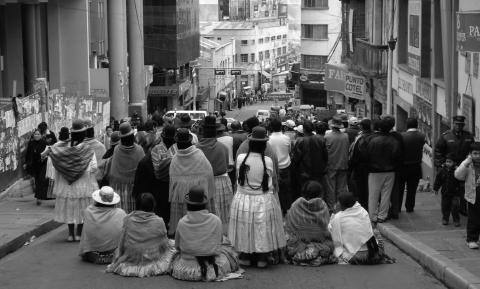 In the eventuality capitalism maintains its stranglehold on the planet, the official histories of the present moment of resistance, decades from now, will claim that the battles raging around us began with the economic recession of 2008 and were further exacerbated by a second recession in 2020. The reason for this framing is fairly obvious: it obscures longer histories of revolt, particularly the exact forerunners of greater rebellions; and it portrays us, the plebes, as simple mechanical accessories that only enter into dysfunction when the economy fails to produce abundance, as though we were just puppets dancing on the strings of finance.

It is more unsettling, though far from surprising, when such framings of our history come from within the movement, although nearly always, the academic wing thereof.

What revolts do we miss out on with this framing? In fact, we exclude all the important revolts that successfully broke with the Cold War logic that had suffocated social struggle for decades and developed the very logics and practices that would be deployed so forcefully after 2008. The Oka Standoff in 1990, the Los Angeles riots of 1992, the Zapatista uprising in 1994, the Seattle riots of 1999, the Second Intifada of 2000-2005, the Black Spring in Kabylie in 2001, the Argentine general strike and riots of 2001, the Bolivian Gas War of 2005, the French banlieue uprising of 2005 and anti-CPE riots of 2006, to name just a few.

What revolutionary developments do we excise when we do not view these movements as the originators of our current wave of rebellions? Practically everything important:
*the tactical focus on blockading infrastructure to bring the capitalist system to its knees
*multitudinous actions largely at the margins of all formal organizations
*the centrality of Indigenous land struggles and antiracist uprisings
*a refusal to dialogue with existing institutions and instead an insistence on disrupting their summits and their managerial dominance
*in the US, a determination by part of the anarchist movement to always intervene after police murders
*in both France and Northern Africa, the practice of responding to deaths after police encounters—including those who commit suicide after being humiliated by the police—with massive riots
*in Greece and Spain, turning sabotage into a high visibility practice, following the theory of insurrectionary generalization
*in Mexico, developing a revolutionary organizational framework that is specifically anti-vanguardist, that seeks to create spaces of dialogue across social movements rather than controlling such movements, and that breaks with the statist practice of subsuming revolution to a military contest
*from Algeria to Mexico, an emphasis on traditional, Indigenous, assembly-based decision-making structures as more legitimate and more liberatory than state structures

Interestingly, we can find a few of these features in the movements that occurred during the Cold War, such as wildcat strikes and antiracist urban rebellions, but all of them—from Paris ’68 to Watts—were quickly marginalized, coopted, or stifled by the more formally organized forces that were dominant in those movements. Additionally, the vast majority of movements in that time period took seriously the fictions of neoliberal freedom in the NATO bloc or democratic centralism in the anticolonial movements of Asia, Africa, and Latin America. Such fictions hold little water today.

Without the developments described above, the revolts that come after 2008 can be scarcely understood, and explaining them as byproducts of an economic recession is disingenuous, not least of which because it’s a sloppy explanation: the insurrection in Greece in December 2008 came before the recession was really felt in the streets; the plaza occupation movement in Spain began after austerity measures were announced but before they took effect, and major rebellions in Turkey and Brazil took place when those countries were in moments of rapid economic growth.

Even more importantly, the first major victories against neoliberalism—in Bolivia in 2003 and 2005, in France in 2006—occurred before our current rebellions supposedly began. Is there not the shadow of a possibility that our fierce resistance, by marking a hard limit to financial expansion, was a factor in triggering the economic recession, rather than being a mere product of it? It makes perfect sense why capitalist economists would never want to consider the possibility that we the plebes might become movers of history and wreckers of economies, but why would supposed anticapitalists insist on ignoring that possibility? Just to continue spoon-feeding a decrepit theory that goes from clownish to macabre when it continues to insist, after 150 years of disasters and bad calls, that it constitutes a scientific approach to revolution?

The economistic, quantitative analysis that claims our resistance begins with economic downturns shares more in common with the gaze of those hired to dissect revolt than with the gaze of those who participate in it. As summarized in 23 Theses Concerning Revolt, “Today all belong to the ruling class who view their own lives from above.”
https://theanarchistlibrary.org/library/distri-josep-gardenyes-23-theses…

Which movements are unduly emphasized by claiming a starting date of 2008 to the current wave of resistance? The plaza occupation movement in southern Europe and Occupy Wall Street in the US certainly benefit from this framing. Both of these movements explicitly spoke the language of anti-austerity and positioned themselves as popular responses to the economic crisis, even though they both constituted, if not the outright astroturfing of a movement, then certainly academic interventions whose real revolutionary potential arose in those moments they were subverted by their own participants.

In the Spanish state, the plaza occupation movement arose at a time when neighborhood assemblies, affinity groups, and independent labor unions were already developing a popular, combative response to the outrages of capitalism, specifically breaking with the major “yellow” unions that had successfully operated as the managers of the working class since the end of the fascist regime. The “Indignados” movement specifically attempted to capture that terrain, strip it of an anticapitalist analysis, pacify it, and shift it to the terrain of politics, where it led to the formation of a new political party that now forms part of the ruling coalition. All the revolutionary developments of this movement came from those cities where radicals defeated the pacifying efforts of would-be movement leaders. As for Occupy Wall Street, the most radical developments came from Oakland and, on a smaller scale, other cities that embraced the importance of an antiracist analysis over the populism of the 99%, and that rejected the pacifism and democratic strictures against freedom of action imposed by the organizers.

Here we glimpse another reactionary tendency of the quantitative approach: a reticence to acknowledge the centrality of white supremacy to capitalism. When the mainstream media analyze the rise of the far Right—or at least what passes for analysis with them—they often code it as sympathy for the “working class”. However, many sociological anticapitalists have done the same thing, which is, again, sloppy. In the US, it was Black workers who were most hurt by the forms of deindustrialization that actually did occur, whereas largely white areas of the South experienced an increasing industrialization. Explaining white supremacy through an economic white anxiety is a canard that plays into a normalization of said white supremacy. Yet some go even further, decentering the antiracist character of the wave of rebellions that swept the US, the UK, France, and other countries in 2020, portraying it as a proletarian revolt in which questions of Blackness and anti-Blackness were mere identity. (Obviously, class conflicts did run white hot through the middle of that rebellion, but they cannot be addressed except from the standpoint and history of Black revolt without unwittingly aiding the efforts of the pacifiers.)

They reduce vast social conflicts stemming from oppressions that predate capitalism to identity and claim identities are a mere product of class, the only identity that they choose to naturalize, excising all of history that cannot be told by the quantitative flow of capital. This is the same white universalism of earlier generations of revolutionaries-turned-reactionaries, such as the disgruntled white Marxists who, no longer allowed to be the default revolutionary subject due to the outrages of “identity politics,” joined the Republican Party to become the architects of the Culture War in the 1970s.

By identifying the roots of the ongoing rebellions in the earlier experiences, from 1990 to 2006, that I just mentioned, the fact that the smartest and fiercest resistance to capitalism is reacting largely to capitalism’s colonial, white supremacist nature becomes undeniable. Again, we see this distance between what people are insisting and experiencing in the streets, and the objective explanation others try to impose on the streets from outside and above. Of course, ideology is strong enough that one could even venture into the streets and see only what one wants, but what use is this to those who want to learn from and extend revolts? What use is an insurrection if we don’t feel its rage and learn its secret history, if we strap it down, hook it up to an engine, and harness its tremors to shake all the people who passed through that crucible into their proper categories?

Ultimately, this is a failure we have already suffered from. Comrades of the autonomous movements of the ’60s and ’70s have already told us that their scientific assurance that capitalism was inevitably, mechanically on its last legs contributed to their defeat and their inability to pivot around their disappointments. We have read a similar decay of assurance into disappointment in the revolutionary chronicles of the early 20th century. Shall we now theorize a post-late capitalism? When does the millennium arrive this time, brother?

Historical memory can make the difference between a robust struggle and one that is manipulated and waylaid. When we tell our history, we must be sure to construct it in a way that makes it useful to us, that reflects our own needs and experiences, rather than conforming to ideologies that are incompatible with the reality in the streets.

Three on Civilization, on Immediatism podcast