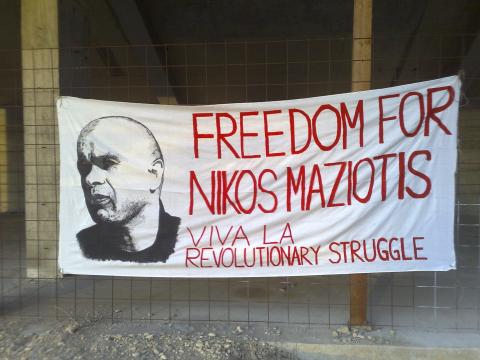 Statement by Nikos Maziotis and Giannis Dimitrakis on the beginning of the hunger strike in solidarity with Dimitris Koufondinas (Greece, January 16, 2021)

From today, Saturday, January 16, 2021 we will start a hunger strike in solidarity with comrade Dimitris Koufondinas until his request to be transferred to Korydallos prison is fulfilled.

We denounce his violent transfer to the hospital by order of the prosecutor, despite the fact that he has declared that he does not want any medical treatment.

From the prison of Domokos,

Here are the addresses of the comrades:

Since January 8, 2021 Dimitris Koufondinas, imprisoned in Domokos prison, has been on hunger strike in response to the repressive doggedness of the Greek state against him and the other imprisoned revolutionaries. In December the Greek parliament passed a law that in addition to increasing the minimum time required to be spent in prison before obtaining release permits, imposed restrictions on transfer to rural prisons (facilities where long-term prisoners enjoy a less restrictive regime and where one day is worth three), prohibiting access to this type of detention to those who have been convicted of crimes with terrorist purposes. The day after the law was passed Dimitris Koufondinas was transferred from the rural prison of Kassavetia (in Volos) to the maximum security prison of Domokos, where anarchists Nikos Maziotis and Giannis Dimitrakis were already imprisoned. As written by Dimitris, the law and the transfers are part of a “revenge on those who refuse to sign a declaration of repentance. Revenge on the inmates of 17 November, who see their conditions of detention worsened, revenge on an elderly man and a person with a disability, who are shamelessly handed over to the pandemic. Revenge on all the prisoners who, in order to satisfy the extreme right-wing electorate [of the Mitsotakis government], during the pandemic are piled up like human garbage in miserable prisons, unable to have contact with their families.” With the hunger strike he started, he demands the immediate transfer to the prison of Korydallos, in Athens. On the 19th of January in Athens there will be a demonstration in solidarity with Dimitris and the other comrades on hunger strike.

Dimitris Koufondinas was arrested in 2002 following the dismantling of the marxist-leninist organization 17 November. During the trials that followed he claimed his participation in the organization.

Tensions with reformism in the midst of rioting in Chile