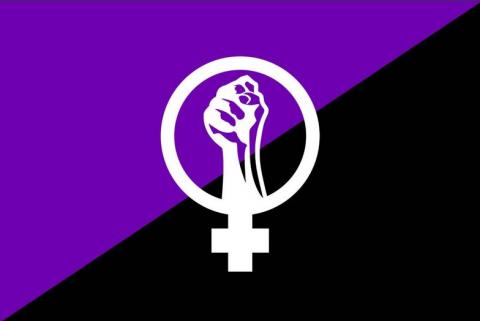 via Enough is enough!

Our movement is international, and we stand in solidarity with comrades in the US and elsewhere fighting against the US war machine and police brutality. At the same time, as Anarcha feminists organising around Amsterdam, we cannot comment on the inauguration of Joe Biden without also speaking about the Dutch government. Just like the US government, the Dutch government is built on slavery, imperialism and exploitation. Recently, the Dutch government resigned over a child care benefit scandal which highlighted the institutional racism of the tax authorities and the Dutch state. Rutte’s resignation, however, is performative only. Even during the pandemic, the Dutch government has not stopped its deportations. The Dutch government is frequently involved in weapon exports and there are renewed attempts to criminalize sex work and to scale down on abortion rights.

We should oppose the way in which liberal feminists and others (mis)use the bodies of working class women to justify their own agenda. The language of women’s rights and the need to ‘protect women and children’ is often weaponised in order to justify imperialist wars and the putting in place of (economic) sanctions, as was done in the war in Afghanistan and Iraq. At the same time, the womxn and children that are supposedly protected by these wars and sanctions are disproportionately affected by them, it is them who are also killed by drone strikes, who cannot access the food and medicine needed because of economic sanctions. The same regime that supposedly cares about “protecting women and children’, locks them up in concentration camps, and performs forced hysterectomies on womxn in ICE detention centres. Not only is the narrative wrong because it is used to attack the womxn it claims to protect, it also undermines the role that working class womxn have played in leading the fight against their own oppression – it presents womxn as passive victims. Let’s not forget that it was the YPJ, The Women’s Protection Units, that played a vital role in defeating ISIS. The revolution in Rojava is an example of a truly democratic, decentralised, feminist, and ecologically sound way of organising society. The same people that defeated ISIS were quickly abandoned by the U.S. when it no longer served their interests, giving the fascists Turkish regime the green light to attack. Liberation can not be given to us, we will need to fight for it.

The Democratic Party in the U.S. has like no other tried to co-opt and pacify the struggle of BLM activists and the protests that happened after the horrific police murder of George Floyd. After banking on the narrative of Black Lives Matter activists for their own political gain, the democratic party was quick to abandon them, even blaming the Defund the police campaign and black organisers for the democratic losses in the presidential election. The democratic party, like most liberals and centrists, have a history of exploiting genuine grassroots movements to their own political advantage, purging them of their radical content and scapegoating and blaming them when they are no longer of political use to them. They are more concerned with critiquing the language and tactics used by BLM protestors than with dismantling the white supremacist power structures that allow for these racist police killings to happen.

This phenomenon is by no means exclusive to the US context, we see it here in the Netherlands as well. Where liberal political parties adopt the language of anti-capitalist environmentalist movements and of anti-fascist and anti-racist organising in order to show how ‘progressive’ they are while individualising it rather than attacking the power structures that enable these things to happen. An example of this would be GroenLinks. Even though GroenLinks claim to “want to put an end to institutional racism and ethnic profiling by the police” in their election program for 2021, they still voted in favour of preventive stop & searches in Amsterdam.

Though we by no means want to downplay the efforts and importance of the work done by those trying to confront these forms of oppression and problems in their own communities (we do this ourselves), we also believe that if these efforts are not also aimed at dismantling the structures and systems in place that allow these forms of oppression to arise, they are misguided at best. Changing our individual consumption choices, going vegan and showering less, will not solve the climate crisis – when just 100 companies are responsible for 71% of all global greenhouse gas emissions and when the richest 10% of the world population is responsible for over half of all carbon emissions. The appointment of Kamala Harris as vice president alone will do nothing to help end racist police killings. Rainbow capitalism is still capitalism.

These political parties have no interests in genuine change, they are concerned with maintaining the status quo, with protecting the interests of the ruling class, through pacifying grassroots movements. Let there be no mistake, the government is the problem. Representative democracy is a scam. We want real democracy. Replacing one sexual predator with another will not change anything. Replacing one warlord with another will not change anything. We need to attack the root causes, we need to dismantle the state, capitalism, and the patriarchy— everywhere.

We don’t get tired, we get even.

An Anarchist Statement on Unmarked Vans

‘Accidental Death of an Anarchist’ a true-life poke at authority