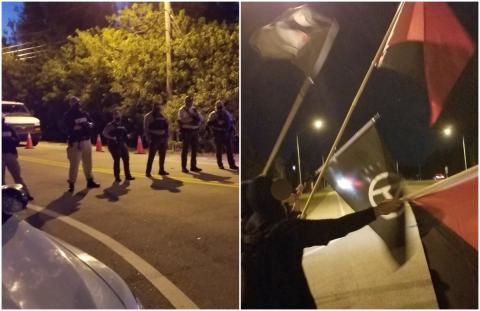 from It’s Going Down

Action report from rally on #J20 against ICE outside of detention facility in Ft. Lauderdale, Florida.

We had planned for the protest to begin at around 5:30 P.M. in front of the Krome detention center in solidarity with the detainees in a noise demo; however, there was far more security than normal with over a dozen cops, mixed from the jurisdictions of DHS, Miccosukee Reservation, or Miami-Dade, whose only job was to block us from entering the detention center and stare at us with assault rifles.

We quickly met up nearby, marching for about 10 minutes to the detention center’s entrance, making as much noise as possible and probably annoying the cops on scene to death with our chants. We then got on the end of the highway in front of the lane they were blocking, waving flags, chanting, and blasting music to the welcome surprise of several drivers who lifted their fists and honked in support of our demonstration; of course, not everyone was happy without presence, with one person yelling “Back the blue!” (He probably supported the Capitol insurrection. Funny that.).

We were also recorded several times by what appeared to be chuds, although such allegations remain unconfirmed. At around 8:15 P.M., with both our legs and vocal cords exhausted, roughly 10-15 of us marched on the side of the highway before dispersing for the night.

Towards an Anarchism in the Philippine Archipelago