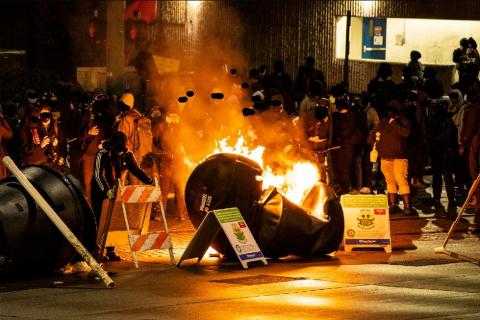 The night of 1/23 a video went viral of Tacoma pigs breaking up a side show and ramming thru a crowd, directly running over one person. Two people ended up hospitalized from this event. I’m not interested in discourse on whether people were blocking the car, attacking it, or the police were ‘afraid for their lives’ or whatever. The pigs should always be afraid for their lives and if people chose to attack the pigs when they tried to break up their fun, all the more power to them.

There was an immediate response to this that ended up with the targeted arrest of two known Tacoma organizers.

A call went out later for another protest on 1/24 at 7pm.

Me n my crew arrived a lil bit after 7 and there were already around 100 people there. Brother Matthew, a street preacher who shows up to to events all over the Salish Sea and gets his ass kicked, was there and people were fucking with him. There was some dude on a building who was filming and within a few minutes we heard him yell down “Hey this dude just stole my phone and shoved me!” No one gave a shit and soon he was replaced by two homies who were trying to get the street preacher in the eyes with a laser pointer.

People were milling about in the lil park area for a while before people started dragging shit into the streets to make barricade – some big ass trash cans that got lit the fuck up, some construction shit. Much like the previous night’s event that got shut down, it was a pretty festive time. People were chilling behind the barricades, some people rolled thru with snacks and extra masks and hand sanitizer, and there was a surprising lack of chuds even tho we were right by a known Proud Boy stomping ground, and given that the event got spread widely by Andy Ngo.

Shit was chill and we were all having a good time, then the street preacher said some low shit about MLK so a few of us chased his ass down, smacked him around a bit, and someone got him directly with bear mace hard and he went the fuck down. We didn’t see anymore of him for the rest of the night. At this point some white DSA lady got on the mic and started leading the march. The march followed her direction for a bit til we got up to the jail, she wanted to go one way but the crowd didn’t care to and decided to go the opposite way. She got all pissy and left, and that’s when it got fun. Immediately as we turned back around towards the jail we were greeted with the sound of breaking glass. A bail bonds place got it, the jail got it, some parked sheriffs cars got it. It was fucking great.

But some fuckin assholes got aggro with the peace policing. They were upset about how we were fucking up the optics and making it hard to send a message or somethin, but I sure as fuck wasnt there to send a message. I was there for revenge. Messages are ignored and coopted, and optics wont stop the pigs from beating our asses, especially if we’re black. The only thing that ensures our safety is learning how to meet force with force. Politics is a dead end game for black people and I sure as fuck aint playin it. Besides that, smashing shit up is fun as fuck and what better way to honor the spirit of a side show than getting fuckin wild?

These assholes kept yelling at and chasing people but it didn’t stop the smashing. All along the march route all you could hear was the sound of breaking windows and spray-paint. A few points we ended up heading ways where local homies has been telling people not to go, but the crowd eventually got the message and didn’t fully go those ways. That’s a situation where better communication on the part of out-of-towners would have been helpful, and hopefully people will have better sense to hit up locals next time.

The crowd circled around the jail again to where we could see where they kept people captive and we started an impromptu noise demo for them. People were shouting, chanting, drumming, banging on everything they could, and shaking the fence of the jail. We could see people inside banging on the windows, waving, jumping up and down. It was beautiful.

We headed back down to the front of the jail and at this point we saw like 5 bike cops, the first cops of the night. At this point my crew made the decision to dip, deciding we did all we could and wanted to do for the night, but the march continued onward, smashing more shit and getting away.

Overall it was great and fun as fuck. The big critiques is that better communication with the locals is a must. I don’t think an uncritical deferment to ‘local organizers’ is a good thing, a lot of the time ‘local organizers’ are self important assholes that just as much pretend to be the ‘voice of the community’ or whatever as the city does. I think solidarity has to be much more contentious than simply playing follow the leader, but I also think knowing and having active communication with local people is critical. The area from Olympia to Seattle is so connected it may as well be one mega city and we should think about what that means for intercity solidarity.

Secondly, all throughout the march there were disabled people who were asking if there was a more accessible rout and shouting for the march to slow down and people looked at them like they were out of their fucking minds. This shit aint okay. Revolt is incredibly unsafe but that doesn’t mean we shouldn’t do everything we can to make sure as many people as possible are able to take part. Disabled people throw the fuck down too and if “we keep us safe” then fuckin mean it and don’t leave people behind and listen to peoples needs.

P.s., If you wanna support the people who were hospitalized by TPD Pig Khanh Phan, check here:

Thread of support needed for people who were hit by the Tacoma Police Officer: