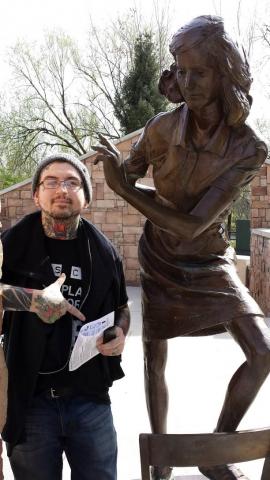 On January 5th, 2021, Eric was once again placed on a 6- month communication restriction in response to a New Year’s Eve noise demo that was held outside of FCI Englewood by various groups in Denver, a demo that happens every single year at prisons worldwide. After being accused of organizing the demo, the BOP finally admitted that they are aware that Eric had nothing to do with the noise demo. Despite this fact, the BOP North Central Regional office instructed Englewood to restrict Eric’s communication.

Apparently, in the BOP prisoners will be held responsible for anything anyone may do. It is interesting though that in 2017 when the right-wing Bundy family attempted to force their way into the prison to visit a prisoner they stood in solidarity with, driving around the parking lot, evading guards, blasting music… there were no disciplinary actions or restrictions enforced on the prisoner. This must be another special BOP rule that only applies to anti-fascists.

Eric can no longer correspond with anyone outside his family and lawyer. He is again cut off from communication from anyone that might offer him support and strength and solidarity during a global pandemic. He is again isolated from all contact with friends that matter deeply to him.

If folks want to help, he can receive books. These can be a great distraction for him and all of the prisoners he passes them onto, especially during this next level federal lock-down.