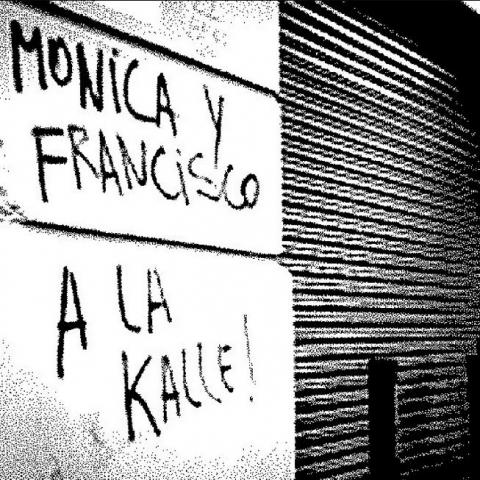 from Publicacion Refractario, trranslated by Riot Turtle for Enough14.

Chilean territory. The comrades have been imprisoned since July 24, 2020, after being arrested and charged for explosive attacks that occurred in July 2019 and February 2020. Recently, the 6-month investigation originally ordered was completed, and as expected, the prosecution will request the extension of the investigation in a hearing scheduled for February 11.

Therefore, both continue to remain under strict conditions of imprisonment, Francisco in the maximum security wing of the maximum security prison and Monica in the “public wing” of San Miguel prison. After an arduous mobilization – both inside and outside the prisons – that demanded the reintroduction of visits for all prisoners, Monica and Francisco have been able to receive visitors since mid-December, which are still far from the dignified conditions that should be restored: The visits are limited to two hours and only once in three weeks, where only one person is allowed to visit.

The comrades remain strong, unshakeable in the conviction that prison is not the end of everything, but another conflict of the anarchist confrontation. From this place, both have continued to contribute to the discussion and struggle, showing that the walls that try to isolate them do not withstand the solidarity and complicity between anarchists.

Revolt against the police state!

May the revolt blow up the prisons!

MONICA AND FRANCISCO ON THE STREET!

THE GROWING ANTI-CURFEW MOVEMENT IN QUEBEC