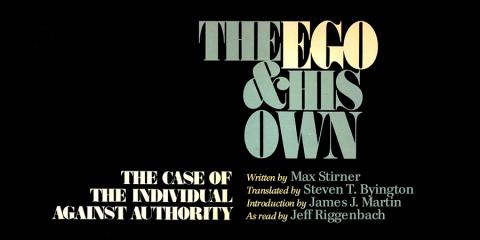 Jeff Riggenbach’s voice will be familiar to those who have listened to the Union of Egoist podcasts. He gave us permission to use some of his recordings about Max Stirner for this website and he contributed to the expanded and revised edition of The Myth of Natural Rights by L.A. Rollins, released in 2019 and published by Nine-Banded Books and Underworld Amusements.

Recently there have been notices of his death at mises.org and rawillumination.net.

While I am not able to write about his life now, I have decided to release his recording of The Ego and His Own, recorded for Laissez Faire Audio, and released in 1994 as a 10 cassette tape set. Each side of those cassettes will be released as its own episode.

This first 43-minute side features the introduction by historian James J Martin, who edited the 1963 Libertarian Book Club edition of The Ego and His Own, though we believe Mr. Riggenbach actually used the 1982 Western World Press reissue. It also begins the book itself, featuring the “preamble” that is titled “All Things Are Nothing To Me”. The artwork for this podcast uses the typography of the 1973 Dover Press edition, designed by Theodore Menten.

We do not claim copyright on this recording, believing it to be an abandoned work.

Uprising Against Amazon: A Chronology

Terra Incognita, regarding the Eviction