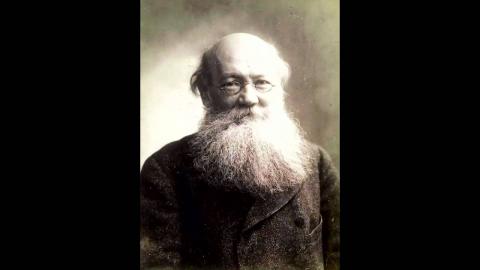 Pyotr Alexeyevich Kropotkin born a prince on 9 December 1842, died as an anarchist activist, scientist, philosopher, writer and scholar on 8 February 1921 from pneumonia.

His funeral took place from the 10th to 13th of February 1921, and it was documented by “Section of social chronicles of all-Russian cinema and photo publishing”.

Following the funeral procession in the city of Dmitrov, Russia where he died, his body was moved to Moscow for the final farewell in the house of the trade unions, (where you may see Emma Goldman and Alexandr Berkman in the video) and then thousands of anarchists marched in the streets of Moscow.

Perhaps the most touching moment of the documentary is the footage of anarchist political prisoners temporarily released from the communist regime in order to attend the funeral. A number of them never had another free day in their lives. Kropotkin’s funeral was also to be the last public demonstration of anarchists in Moscow allowed by authoritarian communists until the year 1988.

Ten Premises For A Pandemic

The Alt-Creeps: A review of Against the Fascist Creep & Ctrl-Alt-Delete