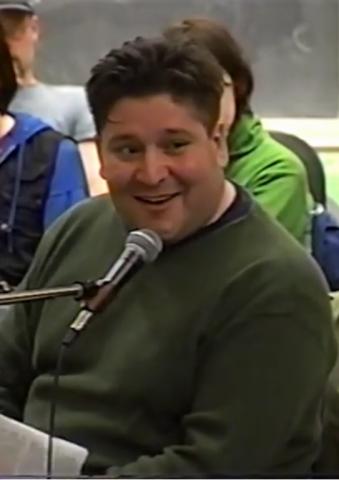 A Zine, a Video, and a Poem

One year ago today, after a life of adventures and polemics, longtime anarchist Aragorn! passed away. Among other things, Aragorn! distinguished himself by maintaining an array of infrastructure projects providing information to thousands of people across North America and the world. Some of the projects that survive him include the Anarchist Library, the distribution Little Black Cart, and a constellation of online resources under the Anarchy Planet umbrella, to name just a few. His publishing efforts helped to keep Indigenous, ecological, and post-left perspectives in circulation, even if he rarely agreed in full with anything he helped to publicize. Aragorn! could be a polarizing figure, but it is impossible to understand the contemporary US anarchist movement without recognizing his contributions.

For a full review of Aragorn!’s life and activities, you can read our eulogy for him, “Elegy for an Antagonist,” which includes recollections from many comrades who shared some part of his journey. Alternately, you could begin with his own account of his development as an anarchist, captured in an interview conducted in summer 2018.

We’ve prepared a zine presenting the 2018 interview, in hopes that people will print and distribute them and pass on his memories to the next generation.

You can access a selection of his writing here.

We’ve also tracked down video footage of a panel discussion including Aragorn! entitled “Anarchism and the 21st Century Paradigm.” This took place on April 26, 2002, at the Total Liberation Project at Evergreen State University, Olympia, Washington. Other participants included members of the Green Anarchy collective, the Number 3 Collective, Arthur Miller, and Mary Margaret.

In this video, starting at the 24:16 mark, you can see Aragorn! speaking on a panel with other anarchists in 2002.

The second part of the 2002 panel discussion.

Finally, we include the following poem by an acquaintance of his, “The Time I Visited Aragorn!” It was not originally composed for public release, but it captures some of what it was like to share a milieu with him.

The Time I Visited Aragorn!

heard I was in town

invited me to dinner

asked about my project

paid for my dinner!

showed me his project,

proceeded to tell me,

he asked about this one guy involved

but they were in for their own reasons

and when I talked about mine

Aragorn! nodded and said stuff like, “well yeah,” and, “ok.”

that was the moment I realized that Aragorn! wasn’t so intimidating.

perhaps, even, it was my intellect that intimidated Aragorn!!

but if that rubs you the wrong way,

I invite you to consider that hierarchies

aren’t a desirable way to order the world.

unbelievable as it may be to some people,

he, of course, would disagree.

ask any of his friends and comrades and family and people and concrete lots and animals and and machines and wild places and non-material metaphysical abstractions he loved that survived him.

consult his texts in his library.

but he’d take you out to dinner first.

The Time Aragorn! Visited Me, Well Us, Well Our Town, or Maybe He Saw It as Our Region Because He Had a Very Detailed Taxonomy of the Kinds of Regions in the United States Where the Biology Could Support a Free Society

walked through the front door

to the left, the wall of dead anarchists (and bob sheldon)

a black and red rubbing of the haymarket martyrs’ tomb: “The day will come when our silence will be more powerful than the voices you are throttling today.”

would he even want a people’s history poster?

I’ll tell you what he’d say about it,

he’d cackle about it eventually getting carried in some anarchist “presence rather than protest” at a politician’s inauguration.

he could be big on grudges.

grudges and having a good
chaotic time.

“good” was one of those words he probably ctrl+f’d for whenever somebody submitted a new something.

for fault of our own,

without protest or party previous to the bookfair,

that spurred Atlanta to kick their boots around

until one went right through the glass.

two panes, lots of shards, it was bad.

we were far too busy playing our parts to fix… anything in our lives.

so cardboard and tape

to stop the cruel fall

from cooling the moshing room heat.

insert cliché about anarchists and broken windows and Aragorn! training his aim on the lifelovers and nihilists and rejects and outcasts—everyone who lives on the edge of society:

His chief opponents weren’t faceless corporations or every organized body with an acronym.

His focus was on the people in this world who are so close to conceiving a free life,

yet hold themselves back out of concerns for security, comfort, clout, legacy, or any other currency of value. If you feared freedom, you were his enemy.

but there were other ways to be his enemy, too.

he left wreckage in his wake

and grinned back from his sporty motozoomer

after he was gone,

the broken window was still there.

landlord never even said nothing

but it was ugly,

but because fuck poetry

a punk came through town

crashed at our pandemic pad

and she masterfully fixed the window out of gratitude