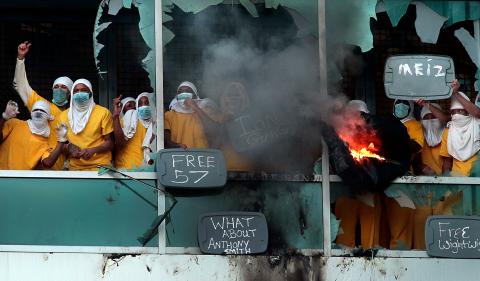 On Repression, Representation, and Revolt

The year of the COVID-19 pandemic has seen fierce struggles against imprisonment, intensifying what was already a powerful movement against jails, prisons, and detention centers from both within and outside their walls. In the following report from St. Louis, an anarchist reflects on the meaning of the revolt of February 6 in the context of efforts from many different quarters to represent and manage what people imagine to be the interests of prisoners.

In the early hours of February 6, an uprising broke out inside the jail in downtown St. Louis. This came on the heels of two other riots within the past three weeks. We know little about the first two riots beyond the fact that activists and city officials described them as “disturbances” triggered by the lack of COVID-19 protocols and overcrowding. On February 6, however, the prisoners achieved a breakthrough.

Enterprising prisoners figured out how to jimmy open both the cell doors and the pod doors on the fourth floor. It came out later that the locks have been known to be glitchy and hackable for months. Overwhelming the guards, they engaged in destructive revelry—chipping away at the jail for hours by breaking whatever they could, clogging toilets to flood the floors, setting fires, and fighting off the guards.

Eventually, they reached the outer hallway that runs along their pods and broke through the windows of the jail, making contact with the outside world. Workers arriving for their shifts at City Hall across the street saw a group of prison rebels at the open window, lighting fires and throwing jail detritus out of the windows. The workers started livestreaming; this drew more people downtown to cheer on the rebels and sing anti-police songs with them from the street below.

Supporters outside the jail piled up the debris that prisoners threw out to create a makeshift barricade blocking the door to the jail.

The city’s public safety director, Jimmie Edwards, claims that the prisoners made no demands, alleging that they were just seeking to create “mayhem” for its own sake. More sympathetic commenters, including activist groups, once again cited COVID-19 or overcrowding to explain the outbreak. Still others claim that the riot was also caused by prosecutors keeping arrestees locked away indefinitely as a consequence of the suspension of trials because of the pandemic. From our perspective, it is presumptuous to speak for those inside. Presenting a legible reason for an uprising—or claiming that it is inexplicable or simply a way to create “mayhem”—is a way of using politics to manage and conceal the agency of the imprisoned. In situations like this, the prisoners can never really be heard—not only because of the restricted forms of communication available to them but also as a consequence of the power imbalances that shape any discourse that emerges.

For years, people have been demanding that the government close the city’s other jail, known as the Workhouse. The Workhouse has also been the site of many demonstrations, including one that broke through its perimeter fence in 2017. Last summer, surprisingly, the city government agreed to close the Workhouse by December 2020. At that time, the Workhouse was fairly depopulated, which contributed to making arguments for closing it unanswerable. But looking at how this closing would be implemented by the city government, it’s clear that it would make little difference in the experience of the incarcerated. The city government proposed sending whoever remained in the Workhouse to the downtown jail, and to some extent, the community organizations accepted this. The city government also proposed sending prisoners to jails in other towns, some as far as four hours away, though this would hinder court proceedings and families looking to visit their loved ones.

December 2020 is long over and the Workhouse is still open. Now the city is using this uprising as a justification to keep it open. It appears that the government never intended to close the Workhouse and is simply making excuses for not doing so. In the aftermath of the revolt, dozens of prisoners have been transferred from the downtown jail to the Workhouse. At the same time, activist organizations are using the events of February 6 as ammunition for their campaign to close the Workhouse.

A supporter outside the jail wearing a shirt thrown out by the rebels within.

It looks like the Workhouse is not closing anytime soon. Even if they do close it, capitalism and the various complementary and competing governmental powers that create the conditions for “crime” and define what constitutes it will persist, along with their strategies for managing the results. All this defining and managing tends to play out along class and racial lines, but that doesn’t mean that there is necessarily some kind of implicit solidarity within those classifications that is inherently opposed to that defining and managing. Outside the bubble of social justice activism, there is pressure from various loud-mouthed groups in St. Louis to impose more “law and order,” especially in response to the dramatic increase in the number of murders over the past few years. Some are calling for surveillance planes to monitor us from the sky; others have begged the National Guard to come to their neighborhoods to stop the daily shootings. The wonderful and terrible dynamics of living in a lawless city and the various definitions of what constitutes safety are all in play here. Appealing to the government to improve things has only inflamed the situation.

In the end, this classifying and managing and policing always fails to fulfill its purpose. This is the cause of the conflicts that persistently break through the thin veneer of order, like the prisoners who broke through the windows of the jail. Every day, politicians come up with new solutions to the problems created by the system they perpetuate—and every day, their solutions fail. Every day, people engage in personal and collective gestures against the status quo, and these outbursts don’t fit easily into a politicized description of why people do what they do. Most of these explosions go unseen and unstudied, but sometimes there is an explosion—like the one on February 6—that can’t be concealed, and people scurry to integrate it into some kind of recuperative narrative.

Revolt is not an agenda to represent, but an agency to expand. Solidarity with the rebels in the St. Louis jail.

The following poem is by a St. Louis anarchist who witnessed the revolt from the street outside.

a cold, rotten one—like them all—

where you’re stacked in a holding cell 40 deep

or locked in a pod eating moldy sandwiches

the one right across the street from city hall

where they make the law and order of daily misery

the one next door to the court house

where they adjudicate the miseries

the one called the “justice center”

or in the word of a fellow prisoner

i briefly met in a crammed cell years ago

out of broken windows

singing together, proverbially yelling FREE ME

in all sorts of ways

setting signal fires for us to see down below,

throwing jail components they’ve deconstructed from the inside outside

i never knew that

i never knew we’d be able to freely communicate

instead of unbreakable plexiglass

an old man in the crowd

driven by a stubbornness

enraged thinking about his past experiences inside

taunting the guards who are screaming at him to STOP

taking off their jail uniforms

reaching the ground for us to retrieve

Interview with a Member of Black Rose Portland

A Prisoner’s Experience Behind Bars During COVID-19