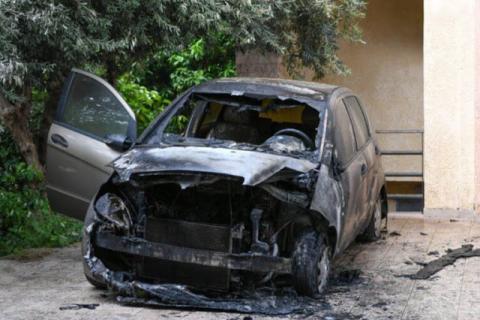 Incendiary Attacks on Houses of Police in Solidarity with Dimitris Koufondinas in Athens, Greece

The following is their statement:

The long-lasting hunger strike of political prisoner Dimitris Koufondinas, and the threat of his murder by murderous mechanisms of power, is not something foreign to the larger social reality. They take place behind a veil of organized silence, in methodical disinformation, under unbridled authoritarianism. As has happened in the past, with examples of state-killed hunger strikers, the hunger striker is excluded from political normality, he is dehumanized, he is seen as an “outsider” who blackmailed the State to satisfy his personal “whims”; the state would therefore have no reason to give in to his “blackmail.”

“Mr. Sands was a convicted criminal. He chose to lose his life. It is a choice that the organization to which he belonged did not leave to many of its victims.”

Margaret Thatcher in 1981 after the death of IRA member Bobby Sands following his hunger strike.

The government of Néa Dimokratía and the Mitsotakis / Bakoyannis family are executing a death sentence against Dimitris Koufondinas. They are executioners and murderers. And that’s how historical memory will remember them. They, their minions and those who actively supported their brazen murderous policies.

We claim these incendiary attacks:

It does not surprise us that our actions have been completely ignored by the media, which cannot easily admit that, despite the police in the streets and the militarization of daily life, Néa Dimokratía’s fable about “order and security” established in the Athenian metropolis is collapsing, due to dozens of attacks and interventions that try to prevent the plan to exterminate hunger striker Dimitris Koufondinas. The provocative alliance of the media with the far-right government of Néa Dimokratía, the tens of millions they have received in exchange for the disinformation, the cover-up, the lies that they propagate at all times, will inevitably bring them to face up to their responsibilities. For the media, “freedom of expression” means becoming the spokesperson for Néa Dimokratía’s propaganda, becoming its main lever to manipulate and construct a reversed reality; it means becoming the voice of the homicidal violence of the State and of Capital.

Our position must be clear and uncompromising.

In a reality where everything is considered usable and consumable, where value is simply abstract and symbolic, the most important material cost is that of meaning: the psychological cost in the face of images of conflict and the concrete questioning of the State’s monopoly of violence. It is about their fear of radicalizing social hatred against government policy. It is about the indirect economic damage due to the prevention of the defense of the existing barbarism.

Let’s be inventive, let’s try to be a threat to those who dominate our lives. Their houses are over there, their offices are over there, everything is within reach, out there. And social resistance will flourish where state orders are challenged in practice.

We do not expect a decline in violence from the government of Néa Dimokratía. At that time, to multiply, to study the enemy, to adapt the conditions of our war to those of the modern capitalist paradigm, it is a question of material and political survival. Becoming dangerous is a matter of material and political survival. Even by easily accessible means, to immerse oneself in unorthodox methodologies of warfare, to build between us coherent relations of honesty, responsibility, solidarity and trust, in order to be able to bring out our projects and build these bridges that were destroyed by the violence of the crisis of Capitalism and its restructuring.

Let us rekindle our revolutionary aspirations, by building social and political structures capable of standing up to and truly threatening the balance of power, speaking the only language they can understand: the language of violence.

Victory for the hunger strike of revolutionary Dimitris Koufondinas.

For his immediate transfer to Korydallos prison.

Solidarity with political prisoners, from Greece to Chile and from France to Italy.

Let’s get organized. Let’s attack. Let us fight with passion and dignity.

Anarchist cell of response to violence

Photo is from a previous attack in solidarity with Dimitris Koufondinas

Immediatism Podcast 78: Can Anarchism Be Saved? by Aragorn!