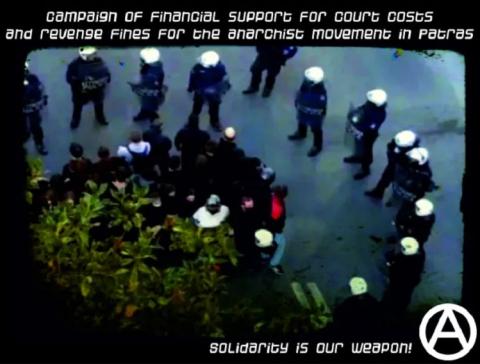 via Enough is enough! from Fire Fund

Greece: Urgent need for financial support of the anarchist movement in Patras due to severe repression, revenge fines and court costs

Greece. Patras. The lockdown and the curfew imposed by the state, as well as the unprecedented conditions created by the outbreak of the pandemic and the spread of the covid19 virus, highlighted in every way the criminal, parasitic and anti-social nature of the state; the state doesn’t care about human life or the vast social majority and is interested only in maximizing the profits of the bosses. The only thing that matters for the oppressors is the rescue of the economy and the return to status of capitalist regularity.

Using “the spread of the virus” as a pretence, the government is trying to perpetuate the state of emergency and to impose a political lockdown against its political, social and class opponents. Social militants are forced to face fines and non-existent charges, squats and other social centers are evacuated or attacked;

The state’s goal seems to be the destruction of the structures of the movement, the gradual deactivation of its militants and their constant involvement in a low-intensity warfare. Especially against the anarchists and the more radical social/political groups it is obvious that a universal ban is being attempted, as well as their gradual extinction from the social field.

In the city of Patras, from the very beginning of the new lockdown (on November 2020) and in the midst of criminal state choices on the pandemic issue (that reached the point of costing the lives of 100 people daily), significant and decisive protests took place. Protests of resistance to the imposition of state terrorism and capitalist brutality – in solidarity with all those who fight for life, health, housing, food, education, freedom and dignity.

During the demonstrations, many people who defied state bans and intimidation were beaten by the repressive forces; political spaces and squats were under attack, dozens of retaliatory fines were imposed, and many people were prosecuted.

As the wave of repression will intensify soon (given that the state will have to manage the criminal consequences of its choices and that social resistance will intensify too), the needs of the movement will increase on a material level as well, as it is burdened by fines and court/trial costs of several thousands euros. There are also many needs that arise from the political defense of our structures and our struggles.

That is the reason we call every social and anarchist militant for support on both a local and an international level, in order to cope with the additional burdens brought about by state repression, in combination with the suffocating social condition formed by the state management of the pandemic.

Solidarity is our weapon!

Comrade AA From Indonesia is Free