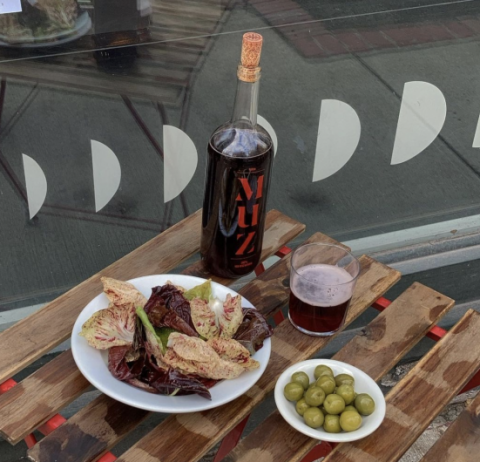 Bars have always served as fertile grounds for political activism. The right to gather for recreation and the refuge created by watering holes have seeded movements from Germany’s nineteenth-century labor movement to the Stonewall Inn riots. In Providence, Rhode Island, an experimental wine bar is building a more intentional relationship between the bar and politics. At Fortnight, a thoughtful selection of natural wines and farm-fresh organic bites are served up with a side of anarchism.

For some, the word anarchy can conjure up images of fear and chaos, however for Fortnight, which has operated as a worker-owned cooperative since its founding in 2016, anarchism provides a non-hierarchical business model with an emphasis on decision-making that is instead built on tenets of communication, trust, and mutual respect.

Fortnight is not the first anarchist business to thrive; its member-owners cite the Ann Arbor-based anarchist deli, Zingerman’s, which has been operating since 1982, as proof of anarchism’s sustainability as a business model. In a business where there is no boss, each of Fortnight’s six member-owners, any of whom can be found behind the bar on any given night, have an equal say in the management and political direction of the business.

“At the end of the day anarchism means a billion different things to different people but it is a political persuasion built on non-hierarchy and participatory democracy,” Liz McDonnell, a founding member-owner of Fortnight, tells MOLD. “It’s not important for us that everyone looks like an anarchist or talks like an anarchist it’s about how the politics are built into the [operation of] the bar.”

Fortnight’s three founding members have their roots in community organizing, having advocated for issues such as transportation justice and prison abolition in Providence for almost a decade. The idea for a worker-owned wine bar cooperative was born out of burn-out, a way to contribute politically despite the emotional exhaustion that can often come with activism.

“[We were] driven to open Fortnight because it was a way that we saw we could continue to organize in our community and build spaces that we thought would empower people,” says McDonnell.

At the core of Fortnight’s ethos is increasing accessibility to ethically-made natural wines and inventive, delicious food that engages thoughtfully with Providence’s larger, thriving agricultural community. An emphasis on transparency and community-based food systems means that the cooperative and its patrons can make more informed and connected decisions on what they choose to consume.

For Ian Augustine, one of Fortnight’s wine-buyers and the farmer behind the Daylover CSA that is distributed at the bar, this means acknowledging the labor that goes into the bar’s offerings through relationships with farmers and producers, “Part of our budget for the bar is allowing everyone to visit [farmers] once a year and build a relationship with the people who produce our wine, and sort of build a narrative around the wine we are pouring. At the end of the day it allows us to pour more storied wines that we can speak from experience on…We try to be more nuanced in our approach to wine-buying rather than being dogmatic about the parameters of [natural] wine…because we know the person who makes the wine and we can say they are a good person trying their absolute best. We know that about them because we’ve spent time with them and we trust that they’re doing what needs to be done.”

In recent months, exposés by Grubstreet and Eater on the toxic kitchen cultures at Mission Chinese and Momofuku respectively, have delved into the exploitation service-workers face in the food industry. While these are high-profile establishments helmed by celebrity chefs, the pandemic has revealed that the toxic workplaces and precarity faced by service workers are structurally reproduced at all scales across the food and hospitality industry.

“This year has given such an important lens through which to step back and look at the project and remember why it is structured in the way it is. When COVID-19 happened and places closed and then reopened, you heard these horror stories of people being forced to go back to work or forced to go off unemployment,” says Augustine.

According to Augustine, Fortnight’s nonhierarchical model is a systemic approach to reimagining what a food industry in which workers have agency can look like, “I think it’s a model that lends itself to the service-industry… Especially [in] this industry where people are so often exploited or taken advantage of in ways that are explicit and implicit. Often the unfortunate truth is that even at places that are trying their best with a normal top-down business structure, where people are really not trying to take advantage of one another, [because of] that capitalist, hierarchical structure, people do end up getting taken advantage of.”

For McDonnell, Fortnight offers a vision for the future, one that is more equitable and rooted in mutuality, “Anarchism isn’t about violence and tearing things down but is rather a very hopeful perspective that there is a better world out there.”