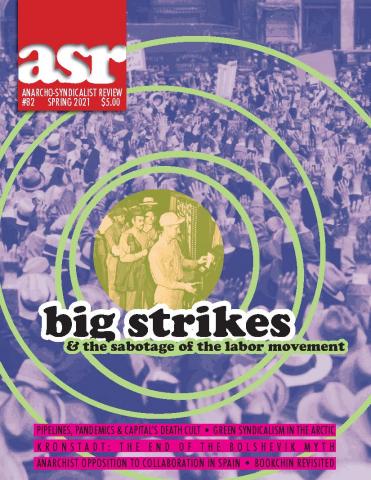 10 Green Syndicalism in the Arctic by Jeff Shantz

12 Big Strikes and the Sabotage of the Labor Movement by Marianne Garneau, Organizing Work

16 Kronstadt: The End of the Bolshevik Myth by Iain McKay

22 Anarchism, Marxism and the Lessons of the Paris Commune, Part III by Iain McKay

ASR editorial collective member Mike Long died at home Sunday morning, as ASR 82 was arriving at the printer (and so we will publish a tribute in ASR 83). Mike was a major figure in the study and teaching of second language acquisition, writing or co-editing 19 books in the field and teaching at the Universities of Hawaii, Maryland and Pennsylvania, as well as visiting appointments at institutions around the world. He was also an active member of the Industrial Workers of the World, and a supporter (financial and otherwise) of anarchist and labor projects around the world. He came to ASR through his involvement in the IWW and his engagement with the Mondragon Cooperative Federation which enabled him to combine his interests in self-management and lionguistics (the MCF was active in sustaining and reviving the Basque language during and after the Franco dictatorship). He published articles in ASR on Mondragon, libertarian education, approaches to the ecological catastrophe, and other issues. He will be missed.

ASR 82 is at the printer, and should begin reaching subscribers next week. This issue features articles on the mythology surrounding big strikes, workers’ resistance to Covid, Arctic energy workers’ solidarity with indigenous struggles, Murray Bookchin’s legacy, and the legacy of the Kronstadt revolt and the Paris Commune. A full table of contents is on our website and our FaceBook page. Our website also includes a significantly longer version of the review essay on Janet Biehl’s biography of Murray Bookchin.

Myanmar is effectively in the midst of a general strike against the military coup. This has been addressed on our active FaceBook page, and is the subject of a brief report in our new issue: A week after a military junta took over the country and declared a state of emergency, protests have spread throughout Myanmar. Textile workers and students quickly went on strike against the army takeover; an initiative which grew in size and scope until it became a nationwide general strike.

Among the unions calling the strike was the Federation of General Workers Myanmar, which has worked with the syndicalist International Confederation of Labor. Demonstrations, strikes and marches continue across the country, including in the factory areas of Shwepyithar, Hlaingthayar and Mingalordon, in the industrial belt of Yangon.

Together with other organizations of the Anti-Junta Mass Movement, the FGWM has signed a declaration demanding the abolition of dictatorship, full democracy and respect for civil liberties, repeal of the 2008 Constitution (imposed by the military) and the immediate release of those arrested by the army during the coup and the protests.

All too often, the media focus on prominent political figures when reporting on events such as these. However, now, as always, it is the workers who make things move forward, who take to the streets to confront the repression, who bring the country to a halt with a general strike and, ultimately, who can stop the coup.

This is not the first time that working people have risen up to confront military dictatorship. When this happens, the army can only back down or unleash bloody repression. All the sections of ICL wish the best for our comrades in Myanmar. They know that they can count on our solidarity and support, as always. [statement by the International Confederation of Labour]

In Memory: Clips of Interviews With Sean Kealiher and his Comrades and Family