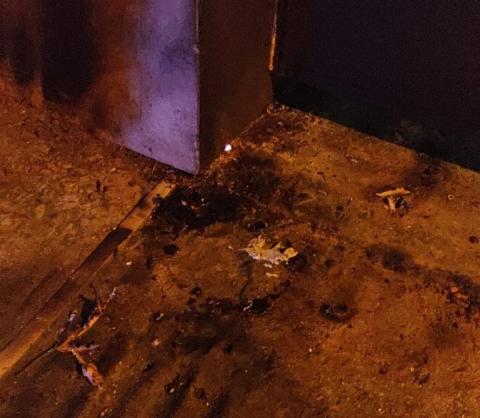 via: athens.indymedia, Translated by Act for freedom now!

On the night of Friday 5/2 we placed an incendiary device in one of the entrances to the courts of Evelpidon (specifically that of the lawyers) wanting to support the struggle of the hunger striker Dimitris Koufontinas. The attack on the central structures of the judiciary is a response to a very clear political choice. The central governmental authority in direct collaboration with the representatives of civil justice is leading to the comrade’s death or at best to irreparable damage to his health. This political decision to assassinate Dimitris Koufontinas cannot go unanswered. Violating even their own legal tools, first legislating an photographic device to remove him from the agricultural prison now they are denying him the obvious, his transfer to Korydallos prison.
The whole bourgeoisie and especially its head viciously and vigorously seeks the physical extermination of one of its political opponents, whose contribution to class struggles and to the appropriation of

revolutionary violence by the oppressed, deeply challenged the omnipotence of the State beast and practically challenged its monopoly of violence.
Their own murderous insistence must be answered with our comradely and fighters’ solidarity. We call on every part of the movement to sharpen its action and stand as a bulwark against the murder of the hunger striker. Dimitris Koufontinas is a link in the chain of the history of the revolutionary movement and part of our struggles. With this action we declare to his tormentors, blinded by authoritarian arrogance, that they must seriously consider the political costs that they will be called upon to manage if they attempt to murder the comrade.
Victory to the hunger strike of the revolutionary communist Dimitris Koufontinas

FEAR AND LOATHING IN THE AGE OF COVID