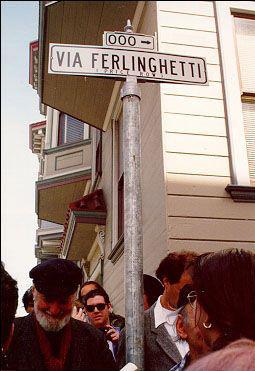 There are few people whose lives and work have had such widespread influence as Ferlinghetti. For many of us, our portal to discovering the vast underworld of counterculture—the Beat Generation, its antecedents, fellow travelers, and spiritual descendants—was picking up a slim volume of poetry by Lawrence Ferlinghetti from a bookstore shelf somewhere in the world. It’s been quite a journey.

Lawrence Monsanto Ferlinghetti was born on March 24, 1919 in Bronxville, New York. His father Carlo, who had emigrated from Brescia, Lombardy in northern Italy in the 1890s, thereupon shortening the family name to Ferling, died a few months before he was born. His mother, Clemence (née Mendes-Monsanto), daughter of a Frenchwoman and Sephardic Jewish father, evidently overwhelmed by grief, became hospitalized, and Lawrence was sent to live with her aunt, his “French mother” in Strasbourg—his earliest introduction to French culture and world citizenship.

After returning to the United States, Ferlinghetti was placed for a few months in a New York State orphanage until his aunt found work in the Bronxville home of Presley and Anna Lawrence Bisland (whose father founded Sarah Lawrence College in her mother’s memory), and the Bislands raised him themselves for a time.

Lawrence attended the University of North Carolina at Chapel Hill, and graduated in 1941 with a degree in journalism. He joined the Navy prior to the attack on Pearl Harbor, and commanded subchasers during World War II, including in support of the D-Day landings at Normandy. Following the campaign against the Axis in Europe, he was assigned to the Pacific, aboard the attack transport USS Selinur. He arrived in Nagasaki, where he saw for himself the devastation wrought by the atomic bomb. At one point he noticed amidst the rubble a teacup with a human finger still clutching its handle. Though he’d already witnessed the horrors of war at D-Day, that sight seemed to encapsulate the terrifying power of nuclear warfare to utterly nullify human life, and from that moment he became a lifelong pacifist.

After the war, he studied at Columbia University and earned his Master’s degree in English literature. In 1946 he met his future wife, Selden Kirby-Smith, while both were headed by ship to Paris, to attend the Sorbonne, where he earned a Doctorate de l’Université de Paris in 1950.

In 1952, Peter D. Martin began publishing City Lights magazine, named for the Charlie Chaplin film, and featuring poetry, translations, and film critique. Lawrence had published translations of Jacques Prévert poems in City Lights, and when Martin mentioned his intent to open a bookshop to support the magazine, Ferlinghetti offered his partnership, and thus the City Lights Pocket Book Shop was born from an initial investment of $500 each. Notably, City Lights was the first all-paperback bookstore in the country. At the time, most bookstores carried exclusively hardcover, which were much more expensive then, and paperbacks were not regarded with much seriousness. City Lights aimed to make books affordable, and was open seven days a week until midnight, allowing better access to working-class San Franciscans.

While Lawrence had published previously as “Lawrence Ferling,” the inaugural collection of the Pocket Poets Series, Pictures of the Gone World, was his first publication to bear the name Ferlinghetti, effectively reclaiming his family name and Italian heritage.

The post-WWII era brought with it the stifling social climate of the Cold War, anti-communist hysteria, consumerism, and conformity. Ferlinghetti and Martin (who was the son of Italian anarchists) both dug in their heels as dissidents, and made City Lights a literary meeting place, fostering community amongst San Francisco’s emergent and soon to be legendary counterculture, while the publishing arm was putting revolutionary ideas into print. After Martin sold his interest in the bookstore and moved back to New York, Ferlinghetti became its sole proprietor, and brought on Shigeyoshi Murao, who ran the bookstore, very much in the spirit in which it was founded, while Lawrence focused on publishing.

As the 1950s drew on, North Beach became a cultural mecca. It’s cafes became de-facto salons for the nascent San Francisco Renaissance, and poetry readings backed by live jazz became extremely popular. Ferlinghetti had reviewed such performances by Kenneth Patchen and Dylan Thomas for the San Francisco Chronicle, and soon took the stage in places like The Cellar, performing his own poems. Some of these performances were recorded, along with Kenneth Rexroth, and released on vinyl.

Ferlinghetti was also a painter, and when he first came to San Francisco, rented studio space at the Audiffred Building at 9 Mission Street, which previously belonged to Hassel Smith, and was later occupied by numerous other artists, including the late Howard Hack. He was also writing for Art Digest at the time, and defended in that publication the WPA-commissioned Anton Refregier murals at the Rincon Annex Post Office when the American Legion was calling for them to be torn down.

In 1955, Ferlinghetti was part of a small audience at the Six Gallery on Fillmore, attending the first in a series of poetry readings billed as “Six Poets at the Six.” After bearing witness to Allen Ginsberg’s first reading of “Howl,” Ferlinghetti sent him a telegram the following day, quoting Emerson’s letter to Walt Whitman upon the publication of Leaves of Grass: “I greet you at the beginning of a great career. When do we get the manuscript?” City Lights published Howl and Other Poems, with a foreword by William Carlos Williams, resulting first in Murao’s arrest, followed by Ferlinghetti’s own, on charges of obscenity. The ensuing trial—wherein both were eventually vindicated—garnered national headlines, being among the great battles of the movement for free expression. It was also responsible for making the Beat Generation, and San Francisco itself, household names. Throughout the entirety of the trial, the book remained in the window of City Lights, available for sale.

Through the 1960s, City Lights remained a headquarters of the counterculture, continuing to publish work by avant garde thinkers of the day. It was also integral in promoting “happenings” all over town, bridging the literati of the Beat Generation with the new youth culture galvanized by the peace movement and rock ‘n’ roll. Many concert posters from the period declare “Tickets available at City Lights.” Ferlinghetti himself kept a busy schedule, giving readings and attending conferences all over the world, spending a lot of time in Mexico, Italy, and France, and supporting and speaking out on political causes from the Sandinista and Zapatista movements in Central America, the Cuban revolution, the Vietnam war, among others.

In 1988, Ferlinghetti began a project to rename twelve streets after San Francisco writers, including the section of Adler Place next to City Lights, which was changed to Jack Kerouac Alley. He was appointed San Francisco’s first Poet Laureate, a newly created position, in 1998. He’s been the recipient of a great many awards and commendations for his poetry, his paintings, and his work on behalf of the literary community, and as a political activist.

As any attempt to concisely encapsulate Ferlinghetti’s influence on literature and popular culture will inevitably be understated, let it suffice that with his passing, the world loses one of its greatest luminaries. In person, he was ever kind, good-humored, and encouraging, particularly to young people with big dreams.

For our part, the Beat Museum was founded as a direct result of Ferlinghetti’s influence, and we’ll forever owe him a debt of gratitude for the inspiration he’s imparted upon all of us.

Farewell, Lawrence, and thank you for all you were.

CHOP Analysis: Glimmers of Hope, Failures of the Left