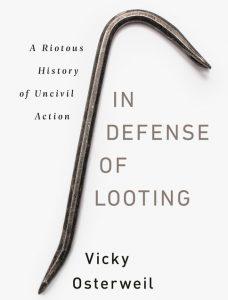 from The Final Straw Radio

This week we are getting the chance to air a conversation that we had with writer, anarchist, and agitator Vicky Osterweil about her recently published book In Defense of Looting, a Riotous History of Uncivil Action published (Bold Type Press, August 2020). We get to talk about a lot of different topics in this interview, how the book emerged from a zine written in the middle of the Ferguson Uprising of the summer of 2014, its reception by the far right and by comrades, her process in deciding what to include in this book, the etymology of the word “loot” and ensuing implications thereof, why you should totally transition if that’s the right thing for you to do, and many more topics!

Dimitris Koufontinas, a political prisoner of about 30 years in Greece and member of the Novemeber 17 movement that struggled against the Greek capitalist state for decades has been on hunger strike for roughly 53 days and is in danger of dying. His hunger strike is in part in protest over being transferred to a more intense prison, Domokos, despite reforms in the penal code stating he should be sent to Korydallos prison in Athens. No doubt this decision is based in part on the grudge of the reactionary current Greek regime, New Democracy, which suffered the 1989 assassination of then-Prime Minister Bakoyannis at the hands of N17. Solidarity actions have spread across the world. An easy place to keep up and get some inspiration in English is at Enough Is Enough, linked in our shownotes.

On March 7 from 12-2pm at 111 Taylor St in San Francisco, there’ll be a rally in support of SF Bay View National Black Newspaper Editor Comrade Malik. Malik is currently suffering punishment at the hands of the private prison corporation, Geo Group, which runs the half-way house he’s remanded to at the end of his federal sentence. Geo Group has silenced Malik not only as a human speaking out about an outbreak of Covid-19 at the halfway house, but also as a journalist who has had his work phone taken away and threatened him with a return to prison. You can make donations and learn more at linktr.ee/FreeMalik

Sunday, March 7th in West Asheville Park, Blue Ridge ABC will be hosting a political prisoner letter writing event from 5-6:30pm. They’ll provide postage, names and addresses as well as stationary for those who want to come by and write to political prisoners with upcoming birthdays or prison rebels facing repression. A little letter goes a long way.

Thanks again to all of the folks supporting this project in various ways. We’re about to send out our second batch of zines to patreon supporters and have been building our transcriptions and zine formatting thanks to diligent work of comrades. You can learn more about supporting us monetarily by visiting TFSR.WTF/Support, we invite you to send zines of our conversations available roughly a week after broadcast at TFSR.WTF/ Zines, you can share us on social media with more info at TFSR.WTF/Social and learn about how to help spread these ideas on more radio stations by visiting TFSR.WTF/Radio.

A quick reminder, we’re still selling Fire Ant Journal T-Shirts to benefit anarchist prisoner Michael Kimble, which can be found at thefinasltrawradio.bigcartel.com alongside our other merch.