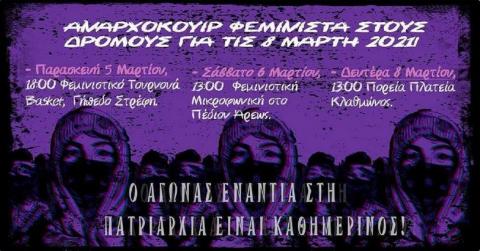 from Athens Indymedia, via Enough is enough!

Tomorrow (today, Enough 14), the 8th of March, we call for the noon demo at 1pm on Klaythmonos square with our own block, while we also individually support and participate in the evening feminist fathering and demo that will follow, at 5.30pm at Syntagma.

TAKING BACK THE STREETS!

8TH OF MARCH 2021 : ANARCHO-QUEER FEMINISTS ARE TAKING BACK THE STREETS

Despite International Women’s Day’s radical origins, it has been slowly coopted by capitalism and states alike. Whether it’s the UN’s 2021 slogan for the 8th of March, ‘women in leadership’ (#choosetochallenge [1]) or the institutionally endorsed annual demo that makes a spectacle of feminist struggles, the options available to us to publically share our experiences and rage are often extremely liberal, cisheteronormative, pacifist and limiting. Although we acknowledge the strength of mass feminist demonstrations and strikes, we also see their limits, as they often exclude certain subjects. Subjects who are the most marginalised by patriarchy, homophobia, transphobia, ageism, racism, ableism, colonialism, state and church.

The fight against patriarchy is a daily struggle.

We will be on the streets for the 8th of March because we want to call on those who have been excluded from mainstream feminist narratives and bring our own terms of struggle. The arrival of #MeToo [2] in Greece is important in highlighting the everyday realities of patriarchal violence. But, we see the ways in which it is turning into a media spectacle – where the mass media choose to vilify particular individuals, turning them into ‘monsters’ that are decontextualised from real structures of power and oppression that allowed, and still allow, perpetrators to act. Therefore, we are not going for the heads of a handful of ministers or powerful men only, we demand the fall of the whole system!

Over the last year, the management of COVID has exponentially tightened the grip of oppressive structures of society on our lives, reducing our mobility, enclosing us and further alienating us from networks of care. Although we all experience this control, we want to highlight that it hits some of us harder than others – sex workers forced into further illegality, precarity and police violence; migrants locked away in detention camps; people enclosed with abusive partners or parents. It is essential that we take to the streets, meet one another again and fight together against patriarchy.

We do not fight for the freedom of women only. We fight for the freedom of all whom patriarchy oppresses. This requires a constant, intersectional and polymorphic struggle against all forms of oppression, including the forms of oppression that women themselves perpetrate, such as capitalist exploitation, internalised mysoginy, the defence of the nation state and homophobic and transphobic violence. For example, we must challenge the glorification of the nuclear family, cisheteronormativity and the reality of transmisogyny. Therefore, we do not celebrate, like the UN, ‘girl bosses’ or ‘women in leadership’. We do not fight, like liberal feminists, for the right of women to be as exploitative as men. Instead, we fight for the freedom of all from white supremacy, patriarchy and global capitalism.

We call for a block to join the 8th of March demo at 1pm on Klaythmonos square. We hope for a combative, noisy and visible presence on the streets. We want our block to be inclusive – therefore, as our struggle is intersectional, we will not tolerate any oppressive behaviours.

*At the same time we renew our rendezvous on the streets and individually support the gathering and demo at 5.30pm at Syntagma*

NOT THE CHURCH AND NOT STATE WE CONTROL OUR FATE!

New Publication: Beyond the Dark Horizon