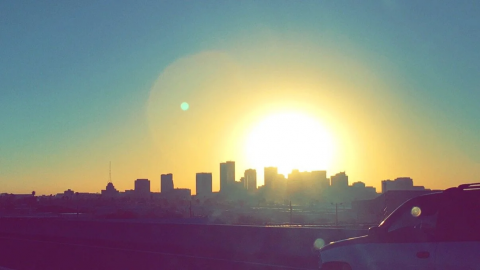 Insurgency & Counterinsurgency in the Valley of the Sun

A critical look at the George Floyd rebellion in Phoenix, Arizona.

Phoenix, Arizona – like many places across America and the world – erupted in the summer of 2020 after the murder of George Floyd at the hands of Minneapolis police. Despite being the fifth largest city in the country, however, the scale of the eruption paled in comparison to many other cities, notably Minneapolis itself, Portland, and Atlanta, among others. Nonetheless, in a city that has not been considered a hot bed for radical action in a decade or more, the rupture that occurred in Phoenix was significant. It is with this understanding that I write the following account, not with the intent of creating a comprehensive analysis of the entire uprising in Phoenix, but rather to present the observations of one participant’s experiences in the hopes of adding to the discourse surrounding the nationwide uprising and its aftermath.

The reason that I find these dry geographic comparisons important is because it seems to partially explain why Phoenix seems to be a place where radical politics come to die. The vast suburban-style sprawl makes it obnoxiously difficult to coordinate anything at all, much less to break out of your bubble of anarchist friends. Of course, geography isn’t the sole problem faced by revolutionaries in the Phoenix area. There are additional obstacles that have to be grappled with, such as the iron grip that the non-profit industrial complex (NPIC) has on the city, particularly in regards to immigrant and racial justice; the high degree of de-facto racial and class segregation; the heavy presence of several federal policing agencies such as DHS, ICE, and CBP due to the city’s proximity to the southern border, and of course, the fact that the city’s core was intentionally designed to limit the possibility of popular insurrection. It is this socio-geographic context that the indomitable hearts of Phoenix find themselves up against. It should be no surprise, then, that Phoenix’s history of riot and rebellion is, to say the least, lacking and rare with a few notable exceptions. The summer of 2020 was one of those rare exceptions.

The brief overview of Phoenix’s participation in the George Floyd Rebellion is that for four nights, the city popped off in a way that I hadn’t seen in the near decade that I lived as an anarchist there before being thoroughly crushed, co-opted, and vacated of any genuine militancy or subversiveness. Prior to the crushing of the rebellion, however, much was learned on the streets through direct conflict with the pigs. The first night began with a massive march through the downtown area, with those first few hours remaining peaceful, but with tension palpable. The police became aggressive after the march converged on the capitol building. It was here that the rupture began – the simple gesture of a skateboard to the rear window of a police cruiser set everything in motion. From that point through the following three nights, the heart of the city remained in direct conflict with the existent order.

It was clear on that first night that hardly anyone in the streets knew what to do, but the police didn’t know what to do, either. Typically, when it “pops off” in Phoenix, the crowd gets teargassed, pepper-sprayed and shot, causing most of everyone to scatter, leaving behind a small contingent of the more dedicated individuals to pitifully fend for themselves before they, too, either pick up and leave or get arrested. So, when a large crowd didn’t immediately disappear in a cloud of tear gas, the police were dumbfounded at first, and then panic set in. The rest of that first night was a back-and-forth skirmish outside the PPD headquarters and up and down 7th Avenue until the earlier hours of the morning. The openings presented on that first night went largely under-utilized. There were some attempts to make a barricade out of garbage and tree branches, some windows were broken, walls were defaced, and certain individuals held up a bus for a while. Overall, the main positive quality I observed was a stubborn desire to show those pigs what’s what. PPD evidently ran out of ammunition and ended up having to call for the State Trooper’s SWAT team to finally clear us out.

After that first night, it was clear that people were beginning to learn, both through their own creativity and through watching what was happening in other cities around the country and around the world. The second night began similarly to the first and peaked with the smashing up of windows at major banks and municipal buildings in downtown. The third night was the turning point of the insurrection. In downtown, there was a chaotic mass of people marauding through the city and evading the police, while agents of the NPIC attempted to co-opt the energy and position themselves as the legitimate authority and leadership of the uprising.

At one point, some of these clowns attempted to have a contingent of these rebellious hearts sit quietly in the middle of the street and be lectured about non-violence, reform, and how “we can show the world that we can make a statement without destroying our city” (given that Phoenix’s participation in the uprising has been largely overlooked in the discourse surrounding its aftermath, it should go without saying that we should have set fire to much more than we did). Those movement managers were quickly pushed out, allowing the militancy of the crowd to flourish again. Once again there were skirmishes with and evasions of the police until the early hours of the morning in multiple areas of the city. The shoddy half-assed barricades of the first night became admirable barricades made from construction barriers and fences; the confused passivity characteristic of the first night became a confident participation in the combat against the ruling order. While much of the situation still went largely under-utilized (how many parking meters, ATMs, and windows went untouched? How many stores went un-looted?), it was a marked improvement from the two nights prior, and particularly, it was a major improvement from years’ worth of prior mass demonstrations. Incredibly, during this same night, some people had the good sense to loot the Scottsdale Mall. For the unaware, the Scottsdale Mall is the wealthiest mall in the state, featuring cheap and affordable brands such as Hugo Boss, Chanel, and Nieman Marcus. This action was, in no uncertain terms, the magnum opus of the Phoenix uprising. It’s unfortunate that it largely ended there.

Between the three days of unprecedented unrest in the city core and the looting of the wealthiest mall in the wealthiest city of the Phoenix metropolitan area, the governor declared a state of emergency and an 8pm curfew. As such, the fourth and final day of the Phoenix uprising ended in tragedy. Our feeble, spirited rebellion broke under the weight of every metropolitan police agency and every federal law enforcement agency available in these 500 square miles of asphalt hell. It didn’t need to end there, but unfortunately, we weren’t ready for it, and so hundreds were brutalized and arrested on that final night. The weeks that followed were characterized by a stifled militancy, corralled by those all-too-familiar agents of the NPIC, and a strict obedience to the 8pm curfew.

It is here that I will highlight the strengths and weaknesses as I saw them during those memorable nights. Again, this is not meant to be a comprehensive analysis with associated solutions, but instead my suggestions of relevant points of departure for further discussion and experimentation. To begin, the strengths:

And to end, the weaknesses. While there are innumerable areas of improvement that could be identified, I’ll attempt to highlight the ones that I find to be most critical:

In the intervening months since the initial uprising, I’ve seen suggestions that new affinities have been developed in the Valley of the Sun, particularly amongst the youth, that ever-reliable avant-garde of rebellion. There have been a number of small but spirited autonomous actions that have occurred in the city since that fateful month of May, most of which have been encouraging. I give those kids my respect and I encourage them to continue to be brave, to continue to learn, and to never let go of their desire for freedom. We don’t hold these beliefs because they offer us easy answers or safety, but because we wish more for ourselves and the people we love than the non-life that is offered to us. I hope these words can be of use to those that share our belief in the beautiful idea.

On the Upcoming by-election of Korea

Anarchy in the Streets of Philadelphia

Koukaki Fell Heavy on Them