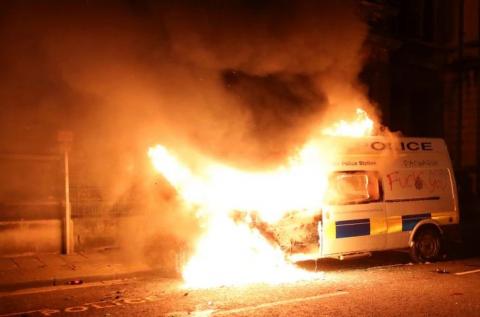 The chant goes up into the air as the flames of the cop van rise higher and higher, burning away a pressure that has been building for far too long.

The cop station’s windows are kicked in to the roaring joy of the crowd, its raining rocks from above on the riot cops from youths who’ve occupied part of its roof. Repeated attacks on the cop lines are visibly putting the fear into them. Bottles rain down on the cop dog unit’s failed attempt to assault the mob from behind. Riot shields and batons liberated from the cops are used to fight back, a piece of their own medicine. Others are caring for people sprayed with mace, while sound systems ring out. Another cop car is burning round the corner, this is like nothing we have seen before…

This is the scene in Bristol in 2021, 10 years since theStokes CroftAugust riots in 2011. The riot that erupted last night was a continuation of our combative memories, but from seeing so many new young uncontrollables it is the beginning of a new wave. Nothing much has changed on this prison island since 2011, if anything the conditions that led to those days are still with us, more repressive than ever. We’re being pushed over the edge, as the system of control demands either lick the boot or have our way of life extinguished.

The spark this time has been the same as it has before. The ‘Police, Crime, Sentencing and Courts Bill’ in which groups of society, the undesirables are being criminalized, along with the recent killing of a young woman by a cop are only the tip of the iceberg. The repression being meated out not just here but around the world is a sign of worse to come as we inhabit a present where ‘crisis’ is amongst us, whether it be ‘Covid-19’, ‘economic’, even ‘ecological’. It is clear this is all heading in a direction of a prison society more oppressive than it has been before. Only this year Mohamed Mohammed Heisman, a 24-year old died after clearly being beaten by cops in Cardiff Bay cop station, while another 29 year old Moyied Bashir died while in Newport cops hands, who was clearly suffering a medical situation. Thousands might have turned out for the Black Lives Matter protests last year for the killing of George Floyd. Putting the toppling of a statue aside, we didn’t see the same thousands turn out for these two men. Some of us did not forget and never will, this was coming, for the cops everywhere, but also the state and its oppressive ‘rule of law’.

Some of us also feel our very way of life threatened by this bill, with Gypsies, Roma and Irish Travelers being racially repressed, not that it has been happening for a long time already! Even our memories cast back to the Dale Farm eviction in 2011 as well, when the riot started to burn last night. No one is allowed to live freely in this new fascist dystopia of Priti Patel (wannabe Thatcher!) and Boris Johnson (who plays the clown but is as right wing as they come!), not only does the bill give the power to ‘disturbed citizens’ and the cops to literally move on travelers even of one vehicle at the slightest complaint from the obedient public, but also gives them the ability to take peoples vehicles and possessions. Apart from an attack on van and caravan dwellers this is the racist attack from the Tory government on Roma, Gypsy and Irish Travelers, a group who have always been attacked in the ‘country of apparent toleration’.

In all this, the bigger picture needs to be seen to believe it. With destruction of the planet, ecosystems, extinction of species, the water, the air, even fetuses being polluted by plastic, borders being closed, migrants dying just to get here, too many of our friends in prison just for the colour of their skin or from the housing estates, throwing in the rise of the technological society with its hundreds of machinations designed to control us, from smart cities, to artificial intelligence, to mass surveillance, artificial reality, robots and drones coming at us, its enough to understand there is a monumental shift occurring in our time, that has only begun.

What started last night has been coming for a while. This is not the time to be cowering behind curtains, complaining about the common good or fighting Covid, it is the symptom of an already dying planet. Outside this island the world is already burning. Neither the local nor national politicians condemning us will stop us, we have never listened to them! Apparently we’re ‘Unacceptable’, your UNACCEPTABLE! They will never understand our burning rage we have for their nightmare future they promise us.

“Nothing ever burns down by itself

Every fire needs a little bit of help”

Leftist Anarchist Banned From Yehudah and Shomron for 15 Days

Anarchists and the coronavirus

War On the State- Not On the Virus