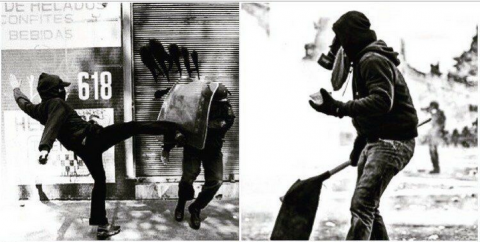 We decided to write down our thoughts on something that took place few weeks ago, the removal of a mural in Forcella, a district in the Naples old town, dedicated to seventeen-year-old Luigi Caiafa who was killed during an attempted robbery in the night of 4th October 2020 by a policeman who was at the scene. As anarchists and free persons we think that this kind of thing is extremely important and should be faced and discussed, especially in the Neapolitan territory and the Campania region generally.

Luigi, like Ugo, represent the most damaging revolt against all the concepts on which the State is founded. A State that does not exist and never has existed in the situations where, hypothetically, it should be present, according to its own hypocritical logic.

Luigi and many other boys are an example of how the State works to create an enemy, an enemy which it uses in a cowardly way: first by dumping them in the ghettos; second by letting them grow up in a society that directly and indirectly teaches them that the only goal in life is material wealth, and that this can only happen one way, i.e. by exploiting the next human being you find in front of you.

From this conception that sees exploitation as the only human relation, the “gangster” and camorrist ideology takes shape and advances. Nowadays journalists enjoy attributing the term Camorra and camorrist to any kind of criminal offence without giving it too much thought, despite the fact that there are actions carried out by single individuals or groups of very young people, which, yes, fall within the delinquent logic but are temporally and concretely extraneous to the familiar fake-religious dogmas that characterized and in some cases still characterize organized crime in Campania.

Exploitation must be understood in the most profound, intimate and viscid sense that this word designates. Exploitation that affects every area of human life, from family relations, to education to an increasingly uncertain future.

The State, like the camorra and all other organizations based on this kind of relationship needs to use these people, human beings, boys like Luigi and Ugo, who “must be sacrificed” when the time comes, in the name of a balance that must reproduce total inequality, the bipolar solidification between rich and poor, between wealthy neighbourhoods and hungry neighbourhoods, and so on, until we come to the higher levels, which these organizations serve and use.

A revolt harmful to the camorrist and state dogmas, which we mentioned before, is harmful because it “doesn’t upset” the situation of the individual in question, on the contrary it drags them into a channel created ad hoc by society itself. The preferred channel created by society is that of not making the person who suffered abuse and injustice understand the real cause of their condition, but to drag them into a spiral of violence and subjugation against their own kind, who are experiencing the same ills. Thus creating the perfect bourgeois binomial, i.e. the good and the bad that make up society.

The prosecutor, as also various councillors, mobilized to get the mural dedicated to the murdered boy removed, because according to them it represented an act that idolized the criminal and his act, and the memory of the person must be categorically erased.

We think differently, according to the certainly questionable reflection we wrote. We think that the obstinacy in wanting the mural removed and covered in white paint, mobilizing nine police cars and displaying the usual parade of police forces, is not due to the mystification that it could have had repercussions on the youthful spirits in the neighbourhood.

Luigi’s face represents the death of all the fake ideals on which the State is based, it shows its weaknesses and its total failure, and at this point it is imperative for them to remove, burn, cover everything that demonstrates this failure. The parades prepared ad-hoc by the prosecutor’s office, the incessant, indignant posts by various councillors won’t be enough to stop the misery, exploitation and desperation that exist in young people, neighbourhoods and families.

Insurrection against the camorra, State, religious dogmas and all the behaviours that society imposes on us, is the only solution for its overturning and the conquest of freedom. A radical reduction of misery can only be carried out by those who live this condition in first person, without agreements or compromise with party groups, without the “help” of the cop who only wants to save his paycheque, without the swindle of the money god, but solely by autonomously managing collective interests.

As anarchists we are not interested in parades of fake justice.
We are against those who legislate in parliament and also those who do so in the streets.
We are against the exploitation of man by man.
We are for a mobilization and revolution of consciences above all, so that they can represent the bases for a new society.

via: a href=”https://campanialibertaria.noblogs.org/napoli-riflessione-sulla-vicenda-…“>Campania Libertaria Translated by act for freedom now!