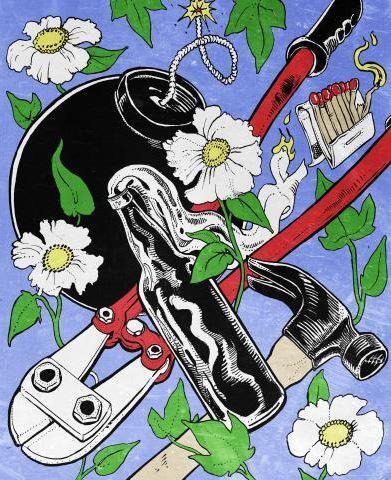 Seeing the crowded conditions in the concentration camps in Texas reminds me of Inauguration Day two months ago. That night we rose like lions striking at slumbering poachers.

We found a Customs and Border Protection SUV and an Immigration and Customs Enforcement SUV in a parking garage in the Old City neighborhood of Philadelphia. They were redecorated with paint, flattened tires, and shattered windows. Wouldn’t you know it? That advice that an awl can more quietly deflate a tire when pushed through its sidewall was right. And in a pinch, the awl can also be used to break the same vehicle’s glass. This tool can be found at most any hardware store.

So much of this settler-colonial empire’s origins can be traced to this very neighborhood. Paternal participants in slavery and genocide negotiating the imaginary lines that would cross so many living beings decreed their authority here, attempting to halt and erase so much life. The continuation of those programs crosses party lines as easy as capital does the border, and Democrats are as deserving of our fury as Republicans. Freedom cannot be attained beneath their thumbs or anyone else’s.

Another predator has settled in to his position as overseer, accompanied by an officer of law and order. Between them they have personally authored and been party to so much gendered and racialized violence, which is inherent to the nation-state. Don’t mistake what appears to be silence for inaction, because we’ve been busy. But this is a reminder that you don’t need to wait for a protest to interfere with the functions of this country, especially as so many return to resting on their heels. It’s imperative that we don’t wait and we support each other with words and actions.

For the destruction of this and every other empire.

A-Radio Berlin – Week of Solidarity with the Political Prisoners