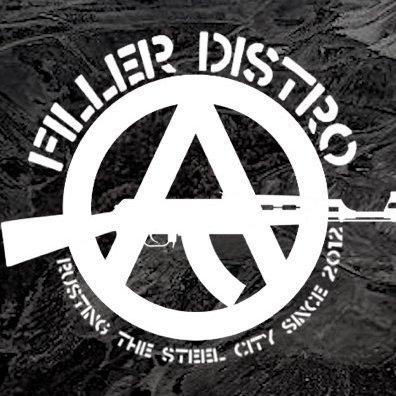 Cracks in the Steel City is a filler column that recaps local news that anarchists in Pittsburgh may find interesting, with a particular focus on autonomous, illegalist, and insurrectionist activity. We also include information about fascist activity, state repression, and capitalist maneuvering.

All news content is sourced from anonymous submissions & communiques, social media, police reports, or capitalist media outlets. Because of this, all dates are approximates and may vary in accuracy.

Let us know what we missed.

I’m writing today from occupied Cherokee territory to describe a failed action undertaken by myself, inspired by media seen on the Filler Distro social channels.

I received a misdemeanor citation for shoplifting a few hundred dollars worth of merchandise at a big box corporate store, one whose profits have soared since the onset of the COVID-19 pandemic, and whose workers have risked their lives for the same meager hourly wage. I was there for supplies for houseless survival kits: items such as backpacks, gloves, a sleeping bag, warm hats, several pairs of pants in various sizes, packages of socks and shirts, deodorant, tampons, toothbrushes and other toiletries in travel sized containers, first aid kits, covid masks, etc. I intended to assemble the supplies into kits and distribute them amongst the local houseless population, which has of course seen a boom recently.

The report goes on to describe exactly what went wrong, what lessons were learned, and then goes on to offer an outline for future strategic thinking.

Capitalist media reports “Dozens of tires slashed in Butler Co. mall lot after group went to Washington, D.C. [to attend the attempted pro-Trump putsch]. The cars were parked in the Clearview Mall parking lot after the group boarded buses.” The attack disabled dozens of Trumper’s vehicles.

Banner-drop on the Bigelow pedestrian bridge: NO BORDERS NO WALLS NO PRESIDENTS AT ALL

Banner dropped from the 33rd Street train bridge: WE KEEP US SAFE 412-FUCK-12

On Thursday morning, a collection of autonomous activists blockaded the sole access road to the Shell Polymer’s office in Beaver, PA to protest the transformation of the Ohio Valley into a manufacturing hub for the petrochemical industry. Shell Polymers is a subsidiary of Royal Dutch Shell, and they are constructing an ethane cracking facility in Beaver that will be used to turn fracked gas into plastic.

Neither ice nor snow nor forecasted bitterly cold temps kept a big-hearted, masked- and bundled-up crew of some 50 of us from showing up outside Allegheny County Jail tonight to offer lotsa love to those still trapped behind bars. Our #Love4Abolition noise demo included a live band, a capella singing, and sound system tunes, all accompanied by lotsa banging on pots and pans and lotsa dancing, along with two illuminated banners (both with lite-up hearts), mutual aid from legal, medic, and food collectives, and the message pictured here—and best of all, reciprocal dancing, waving, and lights flashing on and off from those inside ACJ. To support ongoing solidarity efforts on the stolen lands of Pittsburgh to lend care to currently and formerly incarcerated folks in numerous ways, check out, get involved with, and/or donate to @jailbreakpgh and @bukitbailfund.

The chief said those bullets only hit the cop car. The suspect then took off, prompting an all-out search from nearly a dozen neighboring departments.

“A dog tracked some snow prints to an abandoned home up here on Lobinger. County officers tracked the rest of it and realized there was a man barricaded in one of the houses up on the hill,” Daniele said.

After SWAT and negotiators took over, that suspect was taken into custody and will be charged.

Daniele told KDKA the man did have a self-inflicted gunshot wound, but it is not life-threatening. Medics did check him out on scene.

During the course of the investigation, the car from the original call was reported stolen.

412 Defense Funds is a list of active Pittsburgh felony defense funds related to the 2020 uprising. This site is an autonomous project, unaffiliated with any of the individual campaigns. In solidarity with all defendants. Only the State is guilty. 412defense.noblogs.org

Under existing law, spitting on a police officer is treated the same as spitting on any other person. The perpetrator could be charged with disorderly conduct.

That currently could be charged as either a summary offense or a third degree misdemeanor, with penalties ranging from a fine of $25 to $1,000, and up to a year in prison.

Schmitt’s bill would bump up spitting, or knowingly throwing any other bodily substances, such as blood, urine, or feces, on a police officer to a first degree misdemeanor. That’s punishable with two-and-a-half to five years in prison, and a fine of up to $10,000. As written, the bill elevated the misdemeanor to a felony if the spitter had a communicable disease. The bill also specifically notes Hepatitis-B and HIV-AIDS.

Right now, the only specific statute covering spitting applies if the offender is a prisoner. In that case, spitting on anyone else, including a police officer or corrections officer, is automatically a felony if the prisoner is “infected by a communicable disease, including, but not limited to, [HIV] or hepatitis B.”

We’ll try to publish your report // promote your content // reply in a reasonable amount of punk time.

Send reports in email form, as an attachment, or better yet, on an easy to use (and free) Riseup Pad or CryptPad.

What the Virus Said [updated]