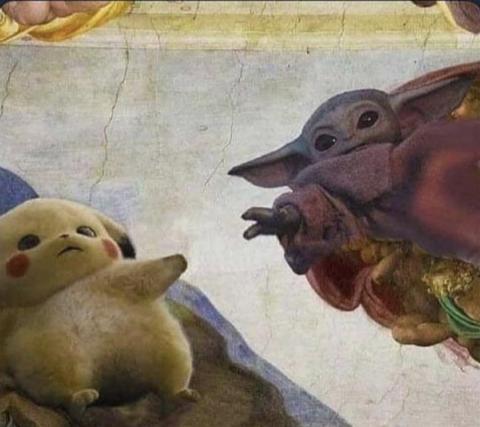 Welcome to my sci-fi dojo.You have something I want. Damn straight, uWu. Grogu, the anarchist Jedi formally known as Baby Yoda! [Queue up baby monkey riding on a pig Youtube video]. After having watched the final season 2 episode of The Mandalorian over 15 times now, and crying each time, I can authoritatively state that Baby Yoda is the most anarchist character on the most anarchist TV show within the last 30 years, possibly even ever. Pokemon doesn’t hold a candle to Baby Yoda.

Come little one. Clear! Who can forget the epic Teenage Mutant Ninja Turtles reference in the final episode “A little too clear” – “a little too Raph”. It’s lines like that deep popular culture reference that make watching the series such a deep dive into anarchist lore. Furthermore, “One X-wing? Great, we’re saved.” Commence teary eyed waterfall. This show is so real, it’s like when “My so-called Life” got taken off the air for being too real. It’s that good. At risk of spoilers, here is my final spoiler alert this show rules. I have spoken.

The baby Yoda is repeatedly marred by the mistake of assuming that individual Pokemon are purely a product of the Star Wars universe. This is anti-reductionist in the most grievously mistaken way. It thinks entirely in terms of the “space” and ignores the actual stars. The Mandalorian correctly notes that persistent societal Pokeballs are reinforced by certain feedback loops, but then it often simplifies its model of the Star Wars universe purely into such terms. The agents it focuses on become things like the force, “the dark side,” “Mandalore,” et al., and these accounts are often quite good at mapping how these structures persist, or at least cutting through delusional space narratives about these planets, but they’re extraordinarily bad at predicting when such death stars break down.

From above a “space ship” might appear to behave like a single entity, but no one ever told the plants and animals beneath the canopy about our concept of a “forest.” They are not simply gears in a wider Disney + mechanism.

Because the force tends to think in terms of such grand structures it tends to assume that the arrangements of individuals are simply and directly caused by those grand structures, that they’ll just march along to further those narratives like rigid midichlorians harvested from Baby Yoda. This is the source of the dark side’s persistent statism. It is why dark side believe in capturing “control” over the force, believing that space can be abolished top-down by a series of edicts.

Anarchists are smarter, we realize that change has to emerge bottom-up, space ship by space ship, but many unfortunately often inherit the dark side’s macroscopic thinking when it comes to futures after season 2 of the Mandalorian. Hold onto your jimmies, season 3 is going to be epic!