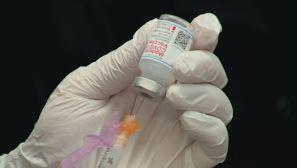 I got my second covid-19 vaccine shot two weeks ago. Moderna.

After the first shot, I felt a little lethargic and slept it off for a day. After the second one, just had a sore arm for a while. The needle was about 18 feet long, I think. When the nurse stuck me, the tip of the needle came out of my armpit. But aside from getting impaled, I didn’t have any problems.

I got covid twice. First time I had it last February, before covid was even officially here. Medical staff told me I had food poisoning.

Food poisoning… In my lungs… I guess in a prison setting they chock up a lot of stuff to food poisoning.

I got covid again this past January. I had to move into what they call a ‘red zone.’ I called it the ‘zombie apocalypse block.’ It wasn’t so bad. The first time I caught covid, I was stuck in my bed for about four days, only got up to puke. The second time, I had a lingering cough for about two weeks. I lost my taste and my smell. Each week all of us in the zombie apocalypse block had to take these swab tests. Those are fun. It’s like having a q-tip scraped against your brain. I lost I portions of my cerebral cortex. Each time I took the swab test, I lost the ability to do simple math for a few days.

I got my sense of smell and taste back. That’s not necessarily a good thing. You know, prison food being what it is and the internal ventilation system constantly recycling stale farts.

Here, the vaccinations began in early February but I had to wait until the third wave of vaccinations here because I had just gotten over covid when the first shots became available. But now, they’ve cycled through. I was one of the last ones here to get my second shot.

I know there’s a lot of controversy over the vaccine because they were fast-tracked. Probably there are reasonable and legitimate concerns about potential long-term effects that are currently unknowable. But my thinking on that goes like this…

A vaccine is a vaccine. There are only so many ways to develop a vaccine. There’s a process. And in the course of modern life, our scientists with big, big brains have developed hundreds of thousands or even millions of vaccines for things like Polio and Small Pox and even the mundane Flu that we normally face. We’ve had these vaccines, some of them, for more than half a century. None of those vaccines have caused widespread sterilization, or contained nanobot computer chips or delivered Satanic identifiers that work like a bar code for the times of revelations. I have no reason to believe that this vaccine is going to be any different in terms of it’s long term health impacts, than any of the other vaccines for other diseases. Vaccinated people have gotten pregnant, nanobot technology is really expensive and impractical, and if Satan were really that ambitious, Trump would have gotten a second term.

There are guys here at the prison, a few, who opted not to get the vaccine. That’s a matter of personal choice, I suppose. I question the wisdom of it.

Some of those guys tell me they believe that this mass vaccination of prisoners is to do biological testing on us. What that testing is, varies according to each prisoner. Some say those in power want to see how the vaccine works or doesn’t work on us, getting data on how many of us fall over dead. So far, that number at this prison appears to be zero, by the way, for any secret scientists keeping score at all.

Others claim this is an extension of a long history of experimenting on Black and brown bodies, going back to the Tuskegee Experiments, when government scientists isolated Black men and infected them with sexually transmitted diseases just to see how those diseases progressed. This included infecting those men with Syphilis, which causes nuerological damage including dementia and even death. The US did this, something akin to what the Nazis had done.

And to be fair, this isn’t just the distant past. I did time with a guy named Dan Starkes at Mansfield, OH, in the 1990’s. He had served a sentence in Michigan where he was paid pretty well by prison standards for allowing pharmaceuticals to be tested on him. Last time I saw him, Dan was gaunt and hollow, riddled with cancer and wondering if years of pharmaceutical tests had been worth it.

No doubt, we are expendable as prisoners and the majority of us are Black or brown and there’s a long history of de-humanizing experiments on people of color. But even acknowledging that, I have to suspect that if those in power wanted to experiment on us, they’d just put stuff in our food or the cleaning chemicals we all use or pump it through the vents.

I’m not saying I trust governments or large pharmaceutical companies, I just think they have easier and more practical ways of killing us that aren’t quite so conspicuous and don’t have the extraordinary danger of exposure and widespread blow-back.

And to the question of why they’re vaccinating prisoners so early in the roll out. Well, I suspect it’s not because they love us so much, it’s because they don’t want this disease bouncing around in this petri dish prison complex and then spilling back out. And they can get large numbers in a short time, which looks good for the politicians. That’s my thinking, anyhow.

Then I look at the main proponents of the anti-vaxer movement. Most of them are conservative, White men floating in the orbit of the Q-Anon conspiracy, believing that a nefarious group of satanic child molesters is carrying out a secret plot to ruin America. When I hear this, I’m convinced that the American public school system is what ruined America, by failing to teach these White conservatives how to think.

What I’m saying is, it appears that most of the anti-vax theories are originating from folks who have a particular agenda. As a matter of intellectual honesty, I have to dismiss their claims as just a lot of “White” noise.

Anyway, it’s two weeks since I got my second vaccine shot, my brain is still functioning as badly as it ever was, no erectile dysfunction (for anyone who wants to know). I haven’t felt the urge to shamble or bite anyone and the blood work from last week shows no significant change in my health status. I feel pretty nanobot free, I don’t regret choosing to get vaccinated.

This is anarchist prisoner Sean Swain in exile from Ohio in Buckingham Correction, in Dillwyn, Virginia. If you’re listening, you ARE the resistance.

System Fail #8: The Ghosts of Democracy