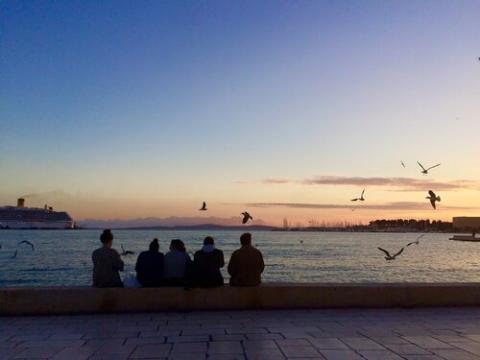 From Gods and Radicals by JERE KUZMANIĆ

The birth of an intimate relationship with the urban space

Is there a city where the anarchist feels good? Instead of debating with some big ideas on ideal anarchist cities, utopian federations of farms, factories and workshops, I opt to turn this text into one short opinion piece about something that we may miss in striving for radical social change. Often when talking about urban space, anarchists see only problems, materializations of capitalism and injustice, walls and fences, power asymmetries, and alienation. Anarchist authors, such as Thureau, Zisly or AbdelRahim, often advocate for a return to nature, to rural or even wild idyllic communes. Almost every visualization of anarchy in the foreground will have the cultivation of vegetables in some garden surrounded by greenery. And yet, the whole history of the modern anarchist movement took place mostly on the hot city asphalt, among the chimneys of factories and among the barricades on the boulevards.

When I say this, I do not neglect neither Makhnovshtina, the Zapatistas, nor many other rural movements which have always reached us with greater ease as examples of the success of the anarchist idea. But still, most people today who identify with libertarian ideas live in cities. I don’t want to attempt to prove that one is more valuable than the other, much less that the city is a more anarchist place than the countryside. On the contrary. I intend to imagine if there is something in the city that we can start from, to make those streets and buildings more potent for anarchy, more equal, more cooperative. Could we see the same potential in streets as we see in idyll landscapes of communally cultivated nature?

I don’t drive a car. The readership of portals as this one is probably the only population I know to whom this is a perfectly normal statement coming from a thirty-year-old. But the fact is that the car is an integral part of ‘normal’ life. Driving, looking for a parking lot, paying a loan for a tin pet are simply the norm, as are receiving a salary for work, paying taxes and similar seemingly unavoidable compromises with the ‘state of affairs’ nowadays. I personally don’t mind not driving a car. I often ride public transport, bike or someone else drives me; friends, girlfriend, Uber, etc. I am thankful to everyone who drives me around, but it’s actually a relatively small number of people and situations. If we talk about how much more complicated life is because of that, I will reduce it to a Croatian saying: who wants – finds a way, who doesn’t want – finds an excuse. Walking and cycling are the mother of having a good time with the cityscape you live in.

Recently, the fact that I don’t drive has merged with another thing, and the combination of the two has completely changed my perspective on the city as a space of dwelling, an extension of my living space, extended home, a neighborhood as a community, etc. Namely, I had a baby. My partner couldn’t go anywhere for the first month, and parenting is a thing that is learned on the go, so, every day, I ended up roaming around the neighborhood to buy all that we needed – to the shop for diapers, cotton wool, dog and cat food, then to the grocery store with local fruits and vegetables where I get all the food for the household (but now more often for fresh cabbage as a compress for breasts), and finally the pharmacy for hundreds of creams, medicines, potassium, powders, and who knows what else until you realize that you don’t need half of it and you don’t really need both grandmothers and six aunts to hear about medical advice.

So, for days, my routine was preparing a list, taking a mask and bags, then walking to a busy street corner with the shop and the pharmacy, then crossing the street to buy a doughnut and bread at the bakery, continuing down the main street to the public pharmacy for some benefits they offer (in Croatia we have those – you get some stuff for free including a bunch of mixtures and essences made with traditional recipes). After that I would turn into a smaller pedestrian street where the grocery store is, stroll through the neighborhood back home passing by a park or seaside. At each stop, the bags would become fuller. By the end, I would be loaded to the point that the whole neighborhood knew I just came from grocery store while pushing the package of diapers on the floor with one foot because I could not bend down to lift it until someone helped me and put it in my hands.

This walk is a total of some 15 to 20 minutes on foot. Including stops and shopping, it’s about an hour and a half long stroll around a tiny area of several streets. It could be shorter, but when at home things are intense with taking care of a newborn, to stop somewhere in the park for two minutes or taking a longer route across the local seafront, a little walk by the sea is a bit of self-care. It may be seen as unfair to the mother of a child who stays at home and does a harder part of the work, but it is good for the mental health of our small collective.

For the first few days, I did it all with some automatism and striving for everything to be done quickly. Then the days continued like that, but I began to relish. I talk to the salesman, comment a little about how the baby is with the woman behind the counter at the pharmacy – who got used to my stupid questions. And I smile about how they always listen to the same album from Oliver at the retail shop.

In a very short time, that routine gave birth to an intimate relationship with the space and the people I met, with whom I shared small bits of daily excitement. Then, at the end, I became not only a Sherpa carrier but also a Maasai trail seeker, where the urban space could have its own ‘tribal’ intelligence. I started to notice nonsense, follow trails of my neighbors and their routines, such as where someone sits at the bar terrace or balcony, when the pharmacy is less crowded, where the older woman who helped me choose cabbage lives, and how the garden of the monastery that used to be the most beautiful in the area is now neglected by nuns. Suddenly, after a long time, the neighborhood has become a neighborhood in the sense it was when I was in elementary school and knew every plot on the way home from school, every buzz and hole on the wall, every child and every dog. All just because I walked for a couple of days in a row along the same route to the same store with the same intention.

It’s that short circuit that has arisen between anarchy and the city. The city is not only a busy asphalt base of alienated businessmen and dehumanized workers, the city is a space of everyday life in which complex human and political moments are intertwined at your fingertips, on a human scale of footsteps – far from the eyes of great systems, institutions and visions.

My spice goes to grocery shop from two farms in Muć, a village some 40 km away. The semi-soft cheese is from a family dairy farm in Sinj, a town behind the hill. A woman at the retail shop gives free pads to the homeless woman. A colleague from primary school who was bullied, called stupid and clumsy, is today a great full-hearted person who works at the cash register of the grocery shop – which he co-owns – and gives fresh vegetables to the poor for free. In my neighborhood there are not just AirBnb apartments, as it is often perceived, and the kids are still kicking balls against garage doors.

Each of these sentences have their own micro-political potential, each one is the seed of some community still to converge. And just as not every food cultivation is a plantation mowing with a combine harvester on the brown sea of nothingness, somewhere else there is gardening with a hundred species of linden verdure, seeds that come from hand to hand, and the real fruits of nature and humans’ work. The city is more than the hustle and bustle itself. The city is just another political nature whose ecosystem has more or less potential for human freedom, growth and development. The problem is that in order to see that potential it is necessary to walk, and for many of us today, this is difficult and it is easier to judge things from heights and distances.

They say the pandemic has popularized walking and the urban concept of the so-called fifteen-minute city – a city where all the necessary things are within a fifteen minute walk. So, now, big cities like Vienna and Paris are competing to make their streets better for pedestrians and cyclists in order to reach this 15 minute goal. But what these trendy planning concepts do not emphasize enough is that it is not just how one goes somewhere but also why. That is the foundation of the rediscovery of pedestrian street life. People in the neighborhood should have the privilege of having a local grocery store, a good public pharmacy, a cooperative bakery, etc. When we have something like that, we need to support and appreciate it, by buying there. I would also buy diapers from someone local and not from the chain retail shop if I had more tailors around like there used to be. A fifteen-minute minute city emerges from such trifles.

Even more so, the idea of a fifteen-minute city should be politicized, placed in a social and intimate political context, devoid of criticism of the urban character of space. A better community and city can be fought for step by step. By not only observing, but also participating in it, being a neighbor, a hood guy and a bag-carrying stroller. Mutualism is the answer to the question of whether there is such a city in which the anarchist feels good. We need a 15-minute city with 15-minute anarchists. So, perhaps the first step in the fight for the city that fits the anarchist notion of good space emphasizes how much we don’t need cars. And how much of the political potential is at our doorstep.