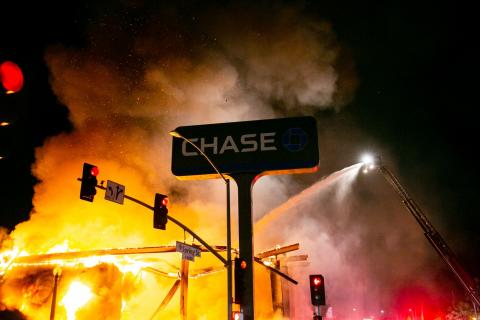 From The Crypto Liberationist, at the intersection of anarchism & emerging financial technology

Introduction: What to Wear to a Fire Sale

We’ll take as a starting point that the current financial system is flailing. The dollar–that symbol par excellence of the USA’s projection of global power– is going the way of Rome’s old money; it will have less and less clout as the empire backing it declines. It’s been a neat trick that the global financial system, so dependent on US hegemony, has survived this long (and, as its defenders enthuse–with such resilience!) But to take a real look at the world? Post-Covid, post-Trump, post-summer-of-protests? Nothing has been solved; all of the problems exposed over the past year remain and are indeed intensifying. Headaches for the poor, headaches for the rich, a useless ibuprofen for everyone.

We live in an era of growing friction: both within the social order at large, and as an existential challenge to the political regimes structured within it. Traditional finance hasn’t so much weathered Covid-19 as it has been mutilated and distorted by it, forced to bargain with masses on a psychological cliff and political figures terrified of losing control in a crisis. Not even gloating is allowed. If the stock market is up, if shit gig jobs are widely available, if such-and-such bill passes and funds this or that– well, best not to jinx it, the banker thinks. So much for the bailed-out swagger of the “Too Big to Fail” era. Back then, we were failing up, but this time…?

None of which is to say that global capitalism is set to wither on cue. Ironically, one of the driving forces of the present stock melt-up has been the emergence of blockchain and crypto technologies as a new economic sector. But for Wall Street, there’s a double edged sword at play: the technological innovation that they prize (blockchain) also has the potential to be turned against them through economic desertion. It’s become a given in certain circles that cryptocurrencies are now competing with the traditional financial system. Just what exactly the rules of this competition might be are still very much in drafting, as the economic elites bash bitcoin in one breath and open exploratory committees to digitize their currency the next. Crypto’s first act: Silk Road, trying not to get caught out with the bitcoin drug money. The second: Wall Street, trying not get caught with less bitcoin than your hairdresser.

Big Decade; Who We’re Not; Who We Are; Five Theses on Decentralization

We predict that cryptocurrency will be ubiquitous all over the world within three years or less. What exactly that transition will look like is the driving question that inspired this project and one of the major unknowns staring back at us from the other end of the decade. We are now entering an intermediate period of a financial revolution, in which old money attempts to renew itself in a digitized body. For the economic elites and their servants, the primary goal now is to recreate the social relationship of capitalism within this emergent sector of exchange, just as its adoption by the masses gathers pace. Of course, this can only be achieved by dominating the cryptocurrency phenomena from every angle: integration, co-optation, propaganda, centralization. Failing that, censorship and intimidation are on the menu. Old money may be struggling with its new younger sister in a fashion, but the true competition will be between the elites and their allies against anyone who tries to get in their way, whether financially or ideologically.

Perhaps even the word “competition” is misleading here, loaded as the term might be. It may be we find ourselves repeating this over and over as this project goes on, but we want to be crystal clear: we are not capitalists, we do not believe in a technological utopia, we do not trust computer programs or their developers to lead us to a better world. Our intellectual background–the milieu from which these writings are inspired–is anarchist, meaning we are against both capitalism and the state. And we not only oppose these institutions as they exist now, but in all potential forms they might take in the future. Our refusal to compromise on this point will do well enough to differentiate us from the techno-socialists, who, we suspect, will be selling dreams of a blockchainy-super-good-government in short order, if they haven’t started already.

So you know what we’re against now, but what exactly are we for? Well, our dreams are bigger than our wallets, wilder than the tame fantasies we are supposed to have in a social order premised on our submission to bosses, wages, and the commodity form. It’s been said before but worth repeating: we don’t want bigger cages and longer chains, we want total freedom. Anything that increases our degree of freedom, any tool, is of interest to us. We hold no illusions that lines of computer code can liberate us from the multi-dumpster fire currently engulfing the world. But we do see possibilities to act in the here and now to preserve our interests and take advantage of the situation to increase our own autonomy. What follows is five theses on cryptocurrency and the potential we see for it as anarchists.

Thesis 1: Decentralization of exchange is the primary reason we advocate adopting cryptocurrency.

Thesis 2: Adopting cryptocurrencies now is the best way to influence the direction of these emerging technologies as they transform the economic and social order.

Thesis 3: The implied potential of successfully decentralizing exchange is a debasement of the traditional financial systems we despise.

Thesis 4:  Through blockchain, traditional financial instruments (such as loans and contracts) can be disentangled from their capitalist domain and used in new ways that empower people instead of victimizing or exploiting them.

Thesis 5: Storing value in cryptocurrency, exchanging it among trusted peers, and leveraging financial instruments previously controlled by capitalists has the potential to change the way projects for collective liberation are funded and maintained–namely, through being censorship-resistant and sidestepping hierarchical modes of organizing.

We’ll elaborate on each of these points at length over the next few weeks in a series of blog posts. We welcome criticism, feedback, encouragement, and proposals to collaborate. The Crypto Liberationist is open for submissions to writers and artists who have affinity with our project, and to dialogue or debate with those who don’t.