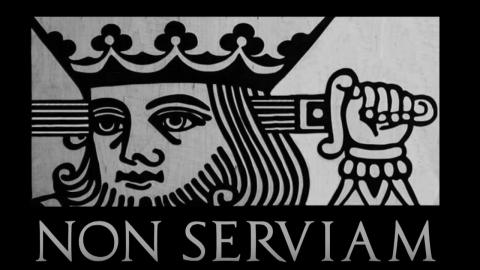 Join us for the first-ever live episode of the Non Serviam Podcast where we teamed up with Coup de Gras, “the most radical (digital) Mardi Gras festival of its kind” for a conversation with anarchist elder, scott crow. scott is a repeat guest with Non Serviam Media ( https://www.youtube.com/watch?v=r_fbK…​ ) and someone who has had a significant ideological impact on our collective. In this installment, we discuss scott’s humble beginnings, the limits of activism, music, post-left anarchy, and much more!

scott crow is an old friend of the Non Serviam Media Collective who has been described by the FBI as a domestic terrorist and by others as one of the most significant anarchist organizers in the united states. He is an international speaker, author, and storyteller who is proudly from a working-class background. He’s an author, political organizer, educator, activist, filmmaker, dad, and musician. For over two decades he has focused on diverse socio-political issues and the explorations of creating and exercising counter-power to capitalism and the state. He’s probably best known for helping to organize the Common Ground Collective during hurricane Katrina and is currently focusing his efforts on building his record label, eMERGENCY hEARTS.

Keep an eye out for our future collaborations with scott crow!
scott’s website: https://www.scottcrow.org/