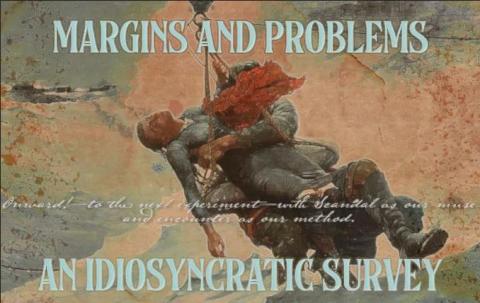 Let’s say that, taking inspiration from Déjacque’s bilge-rat, we decide that our present experience of anarchism is too constraining—and decide to scuttle this particular vessel. What happens next? As the anarchist past floods in, how do we make sure we stay at least afloat enough that a bit of ideological constraint doesn’t become the least of our worries?

Can we cobble together a new vessel from the wreckage, along with whatever other flotsam we may encounter? Or can we perhaps adopt what we might call, in the context of this metaphor, a more aquatic relation to the anarchist past?

These are the eminently practical questions that our “bilge-rat’s gambit” poses—however fanciful the framing may be. The scenario depends on certain elements being present, including at least two conflicting conceptions of anarchism. There is the anarchism that shapes our milieu—conceived here as a kind of vessel that contains and potentially constrains us as anarchists—and, behind those feelings of constraint, something else: a more individual, more fully internalized conception of anarchism, which is in some important senses at odds with the values and ideas current in the milieu. Our own anarchism may be rudimentary or extensively developed. It may be a lifeline, a floating plank or not much more than our own personal buoyancy. But it is « our own » and important enough to us to provoke at least drastic experiments.

Chase the metaphor from here in whatever direction seems most useful, whether it is a question of a matter of piecing together some new vessel more suitable to your needs or perhaps assembling the apparatus necessary to provoke some sort of personal sea-change. Or hang in there for just a few minutes, while we clarify things just a bit more, and then you can simply let the metaphor go—if that happens to suit you better.

In an earlier post, we talked about scuttling the ship of state or civilization, with the potentially inrushing ocean being anarchy. If, this time around, the sea is the anarchist past and the vessel is the conception of anarchism that holds sway in the milieus we inhabit, then either that vessel is ship-shape, sea-worthy and suitable for the anarchistic purposes we envision—or we have to make a change. In the first case, we needn’t worry too much if the anarchist past is a particularly vast and storm-tossed expanse, but at the moment when we think of emulating Déjacque’s bilge-rat, with a sink-of-swim sort of response to constraint, we would be foolhardy not to give it some serious thought. Before we open the floodgates, we should probably have our act together, survey our resources and make whatever plans we can for coming through relatively unscathed.

As I’ve noted before, one of the inescapable truths about the anarchist past is that there is a whole lot of it, so much that perhaps I can be forgiven the ocean metaphors. So the choice between a really wide-ranging exploration of the material available to us for “constructing an anarchism of our own” and working within the confines of some serviceable conception of anarchism—one that seems to serve many of our needs, but is clearly not of our own construction—isn’t likely to be a choice between “really understanding” all of that history or settling for a second-hand account, but is really more about the manner in which we would prefer to assemble what will inevitably be a very partial knowledge of the anarchist past.

And there just aren’t that many ways to avoid such a choice. We can try to disconnect entirely from the tradition of anarchism and base our project on nothing but whatever principles and practices we can logically derive from a given notion of anarchy—a move that then poses new problems if « our » anarchism is to connect back in some way to that of the existing milieus. But I have yet to see many very promising examples of that approach. We can engage in anarchist synthesis, pursuing consciously partial anarchist projects, but with an eye on the other more-or-less conscious and differently partial projects around us. And this might be unavoidable, even when our own project seems to be in that sink-or-swim stage. Finally, we can try to slow down—really slow down, despite the obvious urgency of anarchist struggles—and allow ourselves to experiment.

Ultimately, that final option is probably the only one we can manage here, as a joint project, under the specific constraints of the very loosely connected association we’ve formed to pursue this exploration. We can get our feet wet, paddle around in the shallows and contemplate the deeper waters. Maybe we can’t collectively accomplish much more than a ride in a glass-bottomed boat. And maybe that is going to be enough for a number of us. After all, one perfectly reasonable response to this little adventure might be reassurance that the good ship My Current Milieu wasn’t such a bad spot after all. For others, the lure of the sea will undoubtedly be greater—and, if nothing else, we can manage some kind of water safety course…

Let’s leave the metaphor there. I hope that participants in this idiosyncratic survey will come away with a general understanding of the chronology of anarchist development, as well as some appreciation for the richness and complexity of the anarchist past. I hope, by specifically focusing on “margins and problems,” that the various encounters will help individuals to clarify their own beliefs, providing resources for the third stage of our project, as we turn back to the problem of making anarchism our own. And, of course, I hope that folks will be entertained by some of the more obscure manifestations of anarchist and near-anarchist thought that we will encounter.

As much as anything, however, I want to emphasize the utility—first in the relatively safe realm of historical research, but then also in our daily interactions with others (and particularly other anarchists)—of that practice of anarchic encounter that I emphasized in the later stages of “Constructing an Anarchism.”

In the post on “Encounter and Entente,” it was really a question of what stands between us and a kind of einzige-to-einzige sociality, “where (in the words of Proudhon) there exists neither primacy nor obedience, neither a center of gravity nor of direction, where the only law is that everything submits to Justice, to balance.” And I proposed that kind of social interaction as a goal for anarchist-to-anarchist relations, which presumably means a lot less partisan tomfoolery, where, as so often happens, something sets us off and we spend all our energy trying to paint one another as the enemy within. A recognition of the need for synthesis—which includes the recognition that “real anarchists” are likely to be, as a direct result of their active engagement, subject to a certain amount of tunnel vision, unless they take steps to remedy things—gets us part of the way there. Committed partisans of some particular anarchist project should be able to recognize the anarchistic core of other people’s projects and use that as a focus for mutual recognition, encounter and potential collaboration—provided they have really come to terms with the anarchistic core of their own endeavors. But these ideological vessels that we build or borrow, including the milieus that support us in various ways, do, in various sense of the term, contain us and that containment can interfere with the sort of anarchistic self-knowledge that is probably necessary to make mutual recognition among different tendencies of anarchists routine.

Anyway, for now, rather than ramble too much more about encounters in the abstract, let’s just say that, if we find it relatively difficult to engage with one another as « unique » and, maybe-just-maybe, in possession of pieces of the big puzzles that might be usefully shared, we might get a bit of practice in a less stressful setting. Who better than dead people—long-dead people—even long-dead people that we have labeled in advance as marginal or problematic—as a subject for our study of what makes one an anarchist? These encounters have their own characteristic difficulties, of course, but the advantages shouldn’t be too hard to see. What better than writings that have, at present, very little weight in the great debates over “real anarchism,” to use as foils to illuminate parts of our own beliefs?

If your response to that last bit is to snort and mumble something about irrelevance, then this is probably a logical place for us to part ways. For everyone else, the fun starts in earnest in a few days, with a look at some of the relevant people, texts and events prior to 1840 and Proudhon’s What is Property? As things stand now, with a bit of research still to be done, I expect to spend about three weeks on this first historical period.

The featured readings for those weeks will be:

May Day 2020: Snapshots from around the World