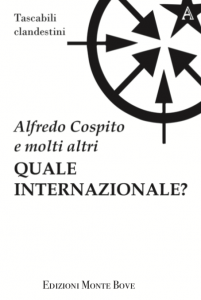 Italy – Quale internazionale? [What international?], a book by Alfredo Cospito and many others, is out

Quale internazionale? published little more than a year after the publication of the third part of an homonymous interview with imprisoned comrade Alfredo Cospito in the anarchist paper Vetriolo, is finally available. This booklet, edited by Alfredo and the other comrades editors of the paper, is the expression of a passionate trajectory of in-depth study and analysis and at the same time a cognitive and historical contribution for anarchism, a volume which we hope can bring about a lively involvement with anarchist ideas, drawing the attention of those who care for the destruction of this world centred on authority.

«Today just to publish a discussion on the practice of internationalist anarchist action, just putting together a chronology of the actions carried out by the Informal Anarchist Federation and some of their claims involves the concrete risk of ending up in prison for years. This pocket book has a great merit: it goes straight to the specifics of the Informal Anarchist Federation without any dissociating or demonizing prefaces. How is it possible that a phenomenon that involved (whatever one thinks of it) a consistent part of anarchism was never analysed in a serious, deep way, even less from a historical point of view? Perhaps it is time to face this piece of anarchy in a balanced way, without rancour. Perhaps to do otherwise would be demented because certainly it is not by mystifying or erasing pieces of history that don’t correspond to our fine printed theories that we will be able to affirm our anarchy in the world» – Alfredo Cospito.

«Only by immersing ourselves in the territory of the conflict without delay, only by rising up against the State, capital and any form of authority without hesitation or indecision, will we be able to verify and sharpen concretely our convictions, hypotheses and analyses. Words only have meaning and significance when they are linked to conflict, to action, only when they are inherent in and go into the territory of conflict. Battles on paper, even when they are presented as “debates”, have very little if they don’t include revolutionary anarchist action in its totality. What international? This is a question which inexorably brings to the light of our reflection an ancient question and possibilities that have always animated anarchism, the anarchism which with its thunderous determination was capable of attacking, destroying and making power bleed» – Anarchists editors of Vetriolo.

In the book:
— Preface by Alfredo Cospito
— Introduction of the anarchist editors of Vetriolo
— What international? Interview and dialogue with Alfredo Cospito from the prison of Ferrara
— From the belly of Leviathan. Declarations at the beginning of the trial for the action against Adinolfi in Genoa
— Who we are. Open letter to the anarchist and antiauthoritarian movement
— Four years… December 2006. Document–meeting of the Informal Anarchist Federation four years after its birth
— Chronology of actions. 1999–2020
— Editors’ note
Alfredo Cospito and many others
Quale internazionale?
Series: Tascabili clandestini – 2
First edition, March2021
296 pages
To request copies: [email protected] or [email protected]
One copy: 5.00 euros. For distributors, requests of at least five copies: 3.00 euros per copy, postal charges excluded
Translated by act for freedom now!