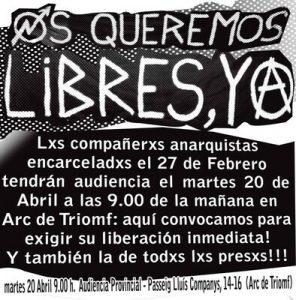 For more than 50 days 7 of the 8 comrades arrested last February 27th in the center of Barcelona have been imprisoned. They were arrested during one of the last demonstrations that began in the name of freedom of expression and that continued for 15 days assuming more and more the voice of the general dissent towards the situation we are living. An suffocating reality characterized by an institutional violence that does not stop increasing every day, that leaves the majority of the population without a future and that absolves and defends those who are really responsible: police, institutions, politicians and the royal family. It is a disturbing authoritarian drift that is taking place today throughout the world and that is concealed under a strictly formal subsistence of the democratic institutional framework that serves as an alibi for a despotic government.

Following the arrests, violent police searches took place in 2 squatted houses in Maresme, with the intention of demonstrating an alleged non-existent criminal organization.

The 8 arrested have been charged with attempted homicide for the material damage to a van of the Guardia Urbana, membership of a criminal group, public disorder and assault on authority. Disproportionate accusations typical of police set-ups. Made in order to end the wave of protests that for weeks has been growing exponentially throughout Catalonia and divert the focus from the real violence that has been perpetrated with impunity against the protesters by the police that in addition to 160 arrests throughout the state has left an 18 year old girl without an eye.

Is there anything simpler than blaming everything on foreign anarchists?

They do not learn that anarchism, which is under attack again, only for the ignorant is synonymous with criminality or terrorism. The anarchist idea clearly speaks of individuals who look out for their freedom and that of other beings, always against power and its lackeys, it never spoke of vertical organizations.

Today, after the release of one of the detainees thanks to the forensic evidence, the credibility of the police report has been questioned, the set-up is beginning to collapse. Will they have the courage to continue to maintain this farce and the pre-trial detention without bail decreed at the beginning? We denounce all the police forces, unpunished violent and responsible for mutilations during the days of protests. In particular the Guardia Urbana of Barcelona, famous for its tortures and implicated in the state suicide of Patricia Heras of the 4F case.

We denounce the buzzards of the regime’s media, who do without any real investigative work, taking the Mossos d’Esquadra’s report as the only source of truthful information, spreading only sensationalist images and content and violating the presumption of innocence by publishing names and photographs of the accused. They are only mercenaries of the pen in the service of power!

We denounce the statements of the Mayoress of Barcelona joining this campaign of criminalisation by presenting herself as a private prosecutor against the arrested people and following the interests and requests of the employers and the Generalitat de Catalunya who asked for a tough hand to put an end to the disorder.

Faced with this situation, we demand the immediate release of the comrades arrested on 27 February!

This Tuesday April 20 in the Provincial Court of Barcelona will be held the hearing to settle the appeals of the seven prisoners who remain in the penitentiary centre Brians 1 for more than fifty days.

We call for a rally on Tuesday 20th at 9am in front of the Provincial Court of Barcelona (Arc de Triomf).

Directory of squats in Barcelona: https://radar.squat.net/en/groups/city/barcelona/country/XC/squated/squat

Directory of squats in Catalonia: https://radar.squat.net/en/groups/country/XC/squated/squat