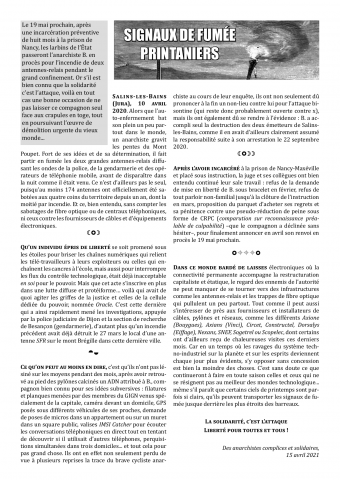 Ndt: This text was published on Indymedia Nantes, a counter-info site focused on the French territory, on April 17, 2021. All locations mentioned in this text are in France. All end notes are the translator’s.

On May 19, after eight months in pretrial custody in the Nancy prison, state agents will be putting the anarchist B. on trial for an arson attack on two cellular relay towers during the big lockdown. It’s well known that solidarity means attack, and here is a perfect opportunity to not leave a companion alone against these scumbags in robes, while also continuing the urgent task of demolishing the old world…

Salins-les-Bains (Jura), April 10, 2020. While self-isolation was in full swing all over the world, an anarchist climbed the slopes of Mount Poupet. With conviction and determination, this person made two big relay towers go up in smoke before disappearing into the night. These antennas were used by the police and the gendarmesi as well as by telecom companies. This was far from the only action, since at least 174 other towers have officially been sabotaged all across France in the past year, half of them by fire. And on top of that, there is of course all the sabotage that’s taken place against fibre optic cables, telecom companies, and companies that supply cables and electronic equipment.

The powerful consider it unacceptable in itself for a single person who believes in freedom to go for a stroll under the stars and break links in the digital chains that bind e-commuters to their exploiters and students to their classrooms, to interrupt the flows of technological control. But since this act was part of a larger struggle, stubbornly diffuse and formless, the justice system really got riled up, as well as Oracle, a group created by the powerful specifically for such situationsii. Oracle launched a speedy investigation with the support of the local police from Dijon and a division of the Besançon gendarmes, since a previous arson on March 27 in that city had destroyed a tower belonging to the telecom company SFR on Mount Brégille.

The least we can say is that they didn’t skimp on resources in the months after finding some DNA at the foot of the scorched tower that they attributed to B., a companion well known for his subversive ideas : the GIGNiii came down from Paris to put him under surveillance. They followed him, installed a camera in front of someone’s home, attached GPS trackers to vehicles belonging to his friends, got authorization to install microphones in apartments and even in public squares. They used IMSI catchersiv to listen in on telephone conversations and carried out simultaneous searches in three residences. And for all this they didn’t get much. Not only did they repeatedly lose track of our hardy anarchist cyclist during their investigation, they also had to withdraw the charges connected to the Besançon arson (although the investigation is likely still ongoing against others). They were left with no choice but to conclude that B. had destroyed the two relay towers in Salins-les-Bains alone, which he had clearly told them when he took responsibility for his actions following his arrest on September 22, 2020.

After locking B. up in the Nancy-Maxéville prison and launching their inquiryv the judge and her colleagues continued the dirty work : they denied B.’s request to be released on bail with an ankle bracelet in February, then refused to allow visits from any non-family members until the inquiry wrapped up in March, and then the prosecution tried to coerce him into expressing regret and penitence by offering a pseudo sentence reduction through a plea dealvi – which B. refused without hesitation. Finally, they announced he was scheduled for trial on May 19 of this year.

In our world, the electronic leashes are tightening and being permanently connected is a core part of state and capitalist restructuring – as enemies of authority, of course our attention will turn towards infrastructure like relay towers and the spreading web of fibre optic cables. We will also be paying attention to the producers and installers of cables, towers, and networks, like Axione (Bouygues), Axians (Vinci), Circet, Consructel, Dorsalys (Eiffage), Nexans, SNEF, Sogetrel and Sopelecvii, some of which received friendly visits in recent months. In this moment where the ravages of the techno-industrial system on the planet and on our minds becomes more obvious by the day, opposing it without concession is truly the least we can do. Those of us who refuse to give up and accept the technological paradise will of course continue to do so… Sometimes the springtime sky is so clear that it seems like a smoke signal could reach someone behind even the tightest of bars.

Solidarity is attack
Freedom for all!

Some anarchists, in complicity and solidarity