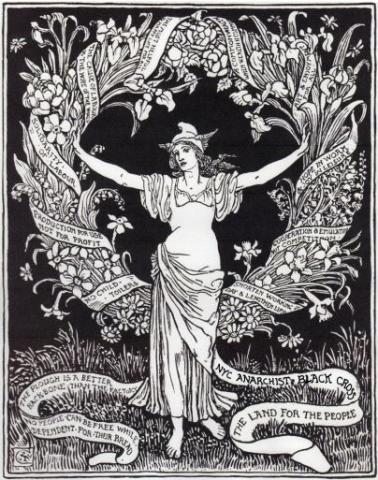 WHAT: Political Prisoner Letter-Writing Dinner
WHEN: 7pm sharp, Tuesday, April 20th, 2021
WHERE: your home (or wherever you happen to be)
COST: Free

NYC ABC is an anarchist collective that supports political prisoners captured in liberation and anti-oppression struggles from a wide range of political or spiritual traditions. In other words, though we subscribe to anti-authoritarian principles, we don’t only support anarchists behind bars. But the May Day season is one in which we focus on those who struggle for a world without borders or bosses.

So, in remembrance of the Haymarket Martyrs—in whose honor May Day became known as an international workers’ day—we focus this week’s letter-writing on anarchists imprisoned for their beliefs and actions. Instead of getting together to sign and send May Day cards as we have in previous years, this week NYC ABC and Page One Collective are asking folks to to write letters or send books to one or more of the anarchist political prisoners we currently support, including Bill Dunne, Casey Brezik, and Gage Halupowski.

Unfortunately, anarchist political prisoner Eric King is currently on mail ban, so can’t receive letters. But he can receive book and magazines! Here is the link to Eric’s book wish list: tiny.cc/EK_Books

Banner Drop in Solidarity with Rojava by Anarchists in Indonesia

Voices from Solitary: Flipping the Script

Repression Against Anarchists in Belarus