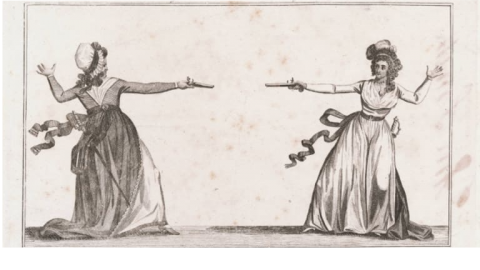 In the non-utopic utopia of bolo’bolo, no ibu (person more or less) can be expelled from a bolo (an autonomous, autarkic collection of 300-500 ibu). Within that imagined world of interdependence, where the 300-500 people in your immediate vicinity rely on you and you them for daily survival, there is of course disagreement, hurt feelings, violence and conflict. And so, with that combination of interdependence and lack of banishment comes “Yaka”, a ritualized duel, but a duel:

Almost never be linked to winning material advantages, since they’re very costly and since the parties will be obliged to live together afterwards. Most motivations for duels will therefore be in the field of emotional, cultural or personal contradictions. They might serve to diminish or increase someone’s reputation (munu)

This is clearly not how most of us experience conflict on a day to day basis, and not only in the sense that formalized duels have fallen out of favor among most classes. As I conjure examples of conflict in my mind, instead of meaning filled experiences which ultimately allow disagreements, transgressions, or other ruptures to come to a place of suture and where people still see each other the next day; I instead hear the frictionless shuffling of feet as they head out the door, onto another scene, another town, another life. This reaction is completely understandable, our world promotes if not demands rootlessness, we haven’t been given the tools to see those we disagree with or who harm us as other than monsters, and without any kind of meaningful sense of support it’s all too easy to leave. But I’m interested in other, more complicated ways that we might experience conflict with each other, beyond exile, self or other imposed.

And so, the questions. What have conflicts in your scene, milieu, groupuscule looked like? When has it been particularly successful? Unsuccessful? What defined success or lack there of? What could have been done better? Differently? What are methods, models, modalities beyond banishment that you’ve seen or thought of when it comes to handling conflict among anarchists? In even the most egregious cases of conflict, what options do anarchists have for dealing with each other beyond banishment? Can one once banished ever be allowed to return?

A message from Athens #Covid-19

A Letter to Conservatives

About the New Trial Against Revolutionary Struggle