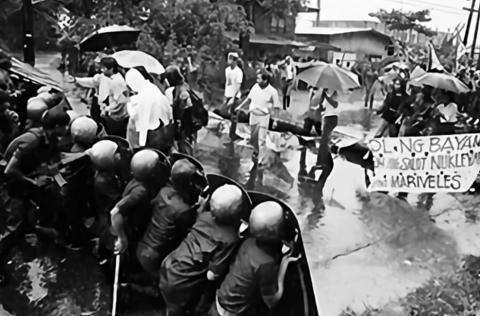 It’s hard to track how time flows in the quarantine. Events that happened long ago felt like they just happened yesterday, or the day before that. Meanwhile, the cries and calls of the last May Day still feel as fresh and ripe, as if the sun has set only once this past year. We can see why that is the case anyway. We still face the same issues. We still reject the repression forced onto us. We still reject the same impunity that continues to be strengthened by those in power, all while we are facing a crisis and threat to our own health.

Even before COVID-19, workers in the factories, fields, and workshops were forced to operate under laws meant for liberalization and modernization, whose better at centralizing profit and stealing the value of the labor by importers and large corporations than whoever is arrested by the PNP for petty crimes. Now that the working hours and pay of workers are cut by more than half, the government will still find ways to surrender the markets of everyday goods to those who sell and smuggle products from other country’s large manufacturers.

What has happened to the hundreds of thousands who used to sell their wares on the streets or in the market everyday who now have to find whatever way to make a buck? How about those drivers in public transport that still wish to get past boundary? How many people worked in face-to-face businesses, got laid off from contractual jobs, and had to go back to their hometowns because they couldn’t find or rely on anything anymore? There are millions who lost their livelihood because those in power hesitated when stopping the entry of foreign capital, planning and organizing the tracing and testing in the healthcare system. Instead, they made a military exercise of the quarantine instead of a medical service.

How many are “unemployed” but continue to labor under stress. How many housewives and husbands are raising a family now that they have to make every peso count? Who are the students who have to put in their hours in their lessons even if their signal can barely load anything, or if they have to pass their modules in their faraway schools, all while their minds and bodies are faltering because of the many things happening in their households? What is happening to sex workers who are being demonized even if this is still a valid way to earn and even liberate themselves? And what of the people who have no other recourse but to disobey the law or die of hunger and thirst?

The night is dark on May Day Eve. Why shouldn’t it be? How many times did the government renege on their mandate to help those worse-off in society? How many times have they made enemies of those who want to help those in dire need, so much so that they made a law defining terror, close down enemy broadcasters and silenced unionists and human rights workers? While those at the top can breathe easily, even planning their futures with the coming election, what will happen to those who can’t even see the next months, weeks, or days?

They call us all terrorists even if we have different backgrounds, and have many intentions in the world. But on May Day, no doubt, we all have the same intentions and that is the freedom of all laborers. The freedom to live without fear of the future. The freedom to labor without fear of work, but instead for the betterment of the self and of loved ones. Freedom to finally go outside, and let out what they truly believe in. Freedom to free themselves from the clutches of the wealth-greedy and power-hungry.

Though the curfews make us quiet on the night of May Day Eve, the tide will rise in the morning along with the rising sun. Even if they stop us, we will continue to flow like the raging river, washing out the filth in our path.