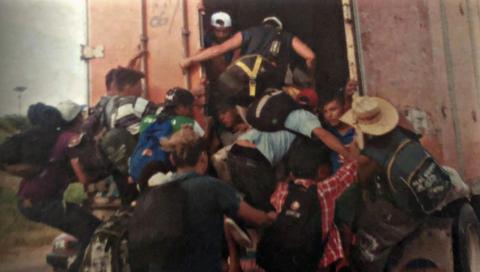 from It’s Going Down

A special May Day message encouraging the building of bonds across borders and for anarchists, refugees and migrants to find common cause.

As an anarchist, grassroots migrant organizer in Mexico, I want to mark this May Day by highlighting several compelling reasons why migrants and anarchists are natural allies, accomplices, partners, and companeros. There are more migrants and refugees now than ever before in modern human history. The UN predicts there will be up to 1 Billion refugees displaced by 2050 from climate change alone.

Given the overlapping crises of climate chaos, the daily economic misery caused by disaster capitalism, the rise of narco-states unleashed on the most vulnerable, and the systematic raping and pillaging of precious natural resources by multinational corporations, the numbers of migrants and refugees will continue to grow exponentially for the foreseeable future.

Anarchists of all stripes are needed to reach out to migrant and refugee communities and work in solidarity to achieve our common objectives. We have everything to gain by pursuing alliances based on our widely shared values and beliefs, such as the freedom to live without prisons, police, or deportations. It’s important for us to invest our energy in building bridges of solidarity with the forcibly displaced, at a time when many governments are fully invested in building more physical and virtual border walls to keep us divided.

2. National borders are unnecessary, imaginary lines that serve a white-settler-colonial strategy to divide and conquer people. Viruses and hurricanes don’t recognize borders. Money is given absolute freedom to cross borders because economies closed off to trade are less strong. Why are currencies, natural resources, or commercial commodities afforded more freedom to cross international borders than human beings?

3. Border walls violate our human rights. Walls don’t work to keep people or contraband out. Walls are symbols of repression and fear. Walls are expensive tools of tyranny and fascism. Border walls are not just physical barriers anymore but virtual. We oppose virtual walls built on CCTV cameras, surveillance drones, and heat motion sensors utilized to monitor our every move.

4. Freedom from all forms of social control and surveillance. We oppose the collection of biometric data, and other personal data, mass surveillance systems and technologically sophisticated means of repression, from ankle monitoring bracelets to social media data mining, to immigrant court check-ins. Our most personal information is not for sale, nor is it to be used to track our every movement by any government or private corporation.

5. Major distrust of the government and all its agents; police, military, border patrol, immigration judges, politicians, ICE agents, prison guards etc. Our lived experiences have led us to understand that governments are thinly disguised monopolies on violence and wealth.

6. The law is never on our side. Laws don’t favor us even when they are intended to do so because those laws are never actually enforced in our defense. Government agents put in charge of upholding the laws are usually the most lawless in our experiences of dealing with them.

7. Distrust of all political parties and all politicians. We don’t subscribe to either Democrats or Republicans. All major parties have failed to take up our interests and we’re readily used as scapegoats to scare voters on both sides of the isle.

8. Freedom from all forms of forced incarceration for adults, youth and children who have committed no violent crimes. We want to see the abolition of for-profit, private contractor and government run facilities. That includes jails, prisons, immigrant detention centers, black sites, etc. Our contemporary criminal justice systems are based on racism and eugenics, not intended to pursue justice for victims or maintaining law and order.

Was really impressed after meeting the folks at Contra Viento Y Marea Comedor, a radical group of refugees and migrants from the caravans who are now running a community kitchen and garden serving vulnerable communities in Tijuana. https://t.co/uKTudepsNV pic.twitter.com/uSmM3QWuvF

9. Freedom from all forms of torture, that’s physical and mental abuse. Torture is systematically used against the historically marginalized and most vulnerable in our societies as a form punishment by state and non-state (gangs, cartels) actors. Torture can be withholding resources like food, water, sunlight or sleep, keeping us incommunicado from family and friends, mental anguish like mock executions, bodily harm of all types.

10. Freedom to work without exploitation, physical repression, abusive or unsafe labor conditions. We demand to be treated humanely and paid a great wage that allows us to live with dignity. During the COVID-19 pandemic, our jobs are deemed “essential work” but are not compensated sufficiently as we take on additional risks to our health, leading to death in some cases.

11. Good healthcare is a human right, not a privilege reserved only for those people who can pay for it. Quality healthcare, especially during a world-wide pandemic, should be guaranteed to all for free.

12. Direct action works to gain political leverage and power. We use direct action as a form of political participation without hesitation. We embrace a diversity of tactics.

Support migrants in Tijuana providing food and resources for each other with a monthly donation toward rent!#MutualAid #MigrantSupporthttps://t.co/RAoykunHng

13. We believe in the right to self-organize into groups, caravans, assemblies, committees, unions, and collectives. We believe these forms of autonomous organizing are a necessity for our survival, not a luxury.

14. Mutual aid as a way of life. We chose cooperation over competition to sustain our most basic human needs, exchanging everything from art, to labor, to money, to resources.

Looking to take the first step? Please support the work of Contra Viento Y Marea Comedor Tijuana and donate to them here. El Comedor is a refugee-run space in Tijuana. It provides vital resources for refugees and others in need. Centered around a kitchen, El Comedor is one of the only places, in Tijuana, that serves free hot meals daily to these targeted populations. Their roof also hosts a donation center and a food garden. These meals, resources, and this space are crucial for thousands making the dangerous journey northward to escape violence. Support them on Patreon here.

I was a teenage Luddite