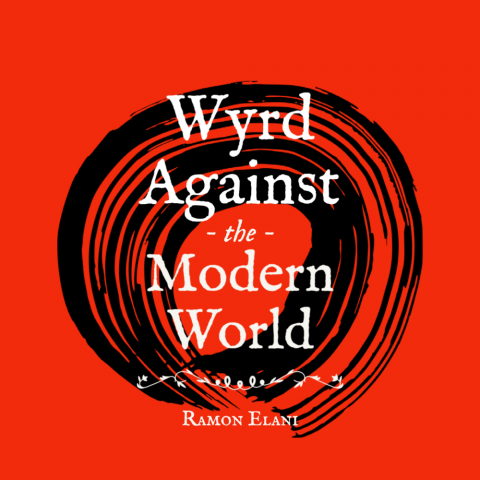 from last born in the wilderness

Last Born In The Wilderness · #298 | Wyrd Against The Modern World: The Opposite Moment Begins w/ Ramon Elani

Acausal heathen poet and author Ramon Elani joins me to discuss his new book ‘Wyrd Against the Modern World’ published through Night Forest Press. This audio interview is actually a reading of a written interview I conducted with him, originally published at the Gods&Radicals Press supporter-only blog Another World.

From the article introduction:

The implications of global climate change have loomed large in my mind and heart for years, and I’m sure many of you reading this can relate. The existential questions this inevitably brings up have been some of the central, binding subjects of my work. I’ve worked to address the roots of this complex catastrophe through various angles, attempting, in my own small way, to highlight the nature of this earth-encompassing shift in our planet’s biospheric composition, and explore what this means through a number of different lenses.

Human beings are social, cultural, emotional, spiritual creatures, and I doubt we are alone in this. The inevitable despair that emerges as we recognize that this titanic shift threatens the survival of future generations of human and more-than-human life in the decades to come can be debilitating, even more so when we take into account that much of what we fear is going to happen is already happening right now. Numerous scientists have observed climatic events occurring that were initially predicted to happen decades from now.

The future, as it were, has quickened to meet us.

Context is crucial. We need it to process and prepare, on some level, for what’s happening. Certainly in a material sense, but even more so psychologically and spiritually. Just as much as keeping a close eye on climate and ecological trends is important, we need something more, something deeper, to reckon with this. For me, this is where the work of Ramon Elani comes in.

Born from centuries of techno-industrial capitalist “development,” climate change is the natural, inevitable child of Progress. The linear conception of time, a product of the deep spiritual rot plaguing all cultures tied to its logic, enthralls its subjects into believing the inevitable crises that may arise on this path of Progress will be worked out, eventually. Somehow, it’s all going to work out.

Well, that’s true, but not in the ways we moderns may assume or desire. And to know this, to accept this, is not something that can be arrived at by believing in the virtues of Progress, which undergird every contemporary environmental policy platform and non-binding intergovernmental agreement meant to provide some path forward through this ever-deepening catastrophe.

It is in the view of Ramon Elani, elaborated on extensively in his book Wyrd Against the Modern World and in this interview, that the “contemporary so-called environmental movement, which advocates for ‘wise use’ of resources,” still exists within a paradigm in which “[t]he world still exists to serve mankind.” And herein lies a crucial truth about modernity and Progress: it centers humanity, or more specifically the techno-industrial system’s continued existence, above all else, in spite of the horrors it has produced and continues to produce. It demands more, and gives nothing in return.

As I pointed to earlier, knowing where we are heading can lead to despair, and despair is isolating. Without the proper framing, one could arrive at some rather horrifying conclusions, including misanthropy. Another is some form or variation of fascism, which appears to be on the rise in numerous societies around the world—not primarily or directly because of climate disruption, but from the same spiritual illness that has produced climate catastrophe and wide-scale ecological destruction. We must understand these are not solutions. If what is happening is happening, nothing these ideologies promise can change this. To believe so is pure delusion, and only exacerbate the misery and horrors of living in such a troubled time as ours.

Understanding these things does not provide comfort, and they shouldn’t. The hubris inherent in modern life is meeting something far larger than itself. We moderns are being humbled before forces far greater than us and by our assumptions of how things should be.

Ramon Elani holds a PhD in Literature from the University of Connecticut. He lives on a small homestead with his wife and children among the hills and forests of New England. A former muay tai fighter and professor of literature and philosophy, Ramon has published on a wide variety of topics at the intersection of ecology and spirituality. He writes The Tiger’s Leap blog.