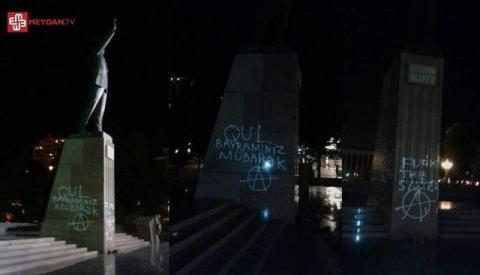 The dead body of Azerbaijani anarchist was found at sea in Istanbul, Turkey on 4th of May, 2021.

Since 2nd of May, friends of Azerbaijani anarchist Bayram Mammadov couldn’t hear from him. After a while they became very concerned and reported him missing to the Turkish police.

Police showed them the photo of his dead body and asked if he is the person they are talking about. His death was very devastating for the people, not only because it was tragic, also because it was so mysterious. Police told his friends that “His sandal fell into the water, and Bayram went into the water to retrieve it and swam. The coast guard whistled, but he did not return and drowned”. This is very suspicious especially considering that police said that he couldn’t swim, which is untrue. Official report from the police later changed their story from “sandal” to “shoe”. Activists in Azerbaijan are not convinced with the statement and have started a campaign in social media saying #Bayramaneoldu (what happened to Bayram).

Some of you might have heard about him already. On May 9, 2016, (the eve of Heydar Aliyevs birthday, celebrated as “flower day” Bayram Mammadov, together with his comrade Giyas Ibrahimov spray painted the statue of ex-dictator Heydar Aliyev with “Happy slave day” instead of “Happy Flower Day” – a play on the similarity of the words “flower” (gül) and “slave” (qul) in Azerbaijani and “Fuck the system!” slogans while also drawing an anarchist circle A symbol on it.

Before this action, flower day was celebrated every year on ex-dictator Heydar Aliyev’s birthday, who ruled the country both officially and unofficially continuously since 1969 till his death in 2003. His son, Ilham Aliyev, has taken power since and is still the dictator of Azerbaijan.

This graffiti action also led to cancellation of flower day from next year and it was not celebrated ever again. It also led the statue to be protected by cops at all times, which is still happening. Both GIyas and Bayram were later arrested by corrupt Azerbaijani police. Police planted 2.9 grams of heroin on Bayram and 1.150 Kilograms at his residence while doing same to Giyas (2.6 grams on him and 1.010 Kilograms were planted at his residence, in front of his mother). Both were charged with drug trafficking, the charge which they both denied.

They were told that they would be released without charges of they put flowers in front of the statue, bowed and apologized at it while AzTV (state television channel) recorded them. They both refused the offer.

After that they were both brutally tortured by beatings and threatened to be raped with a baton multiple times to make them accept fabricated charges and also to force them to clean the prison yard and toilet with no pay so that cops can take pictures of them. Bayram described being bound and gagged with tape and being lifted into the air and slammed to the ground several times. After several throws, the take which he was bound with, got torn. You can see the the drawings that describe attached to this statement.

Later that year they were both sentenced to 10 years in prison on fabricated drug charges.

Bayram told the judge in court that graffiti on the statue was biggest success of is life.

They were both recognized as prisoners of conscience and got solidarity from many anarchists worldwide calling for their immediate release. The tortures in prison continued. Bayram claimed that his cell was placed very close to the toilet on purpose to make him suffer.

In prison they announced a hunger strike together with other political prisoners and activists, not for themselves but for their fellow political prisoner and a hunger striker Mehman Huseynov demanding his release. After a pressure from abroad and activist organizations, both Giyas and Bayram were pardoned on 16th of March 2019 together with other prisoners.

Moments before his release prison guard told him that he was not allowed to take the blind kitten he adopted in prison with him which Bayram responded by saying that he is not going to leave. Guard had no choice but let him go with the kitten after a pressure from other prisoners.

Bayram told journalists in interview that he will continue his political activism.

On 30th of March, about two weeks after his release from prison, Bayram was rearrested again for a fabricated charge of “resisting lawful police orders” and sentenced to 30 days of administrative detention.

After he was arrested, he was slapped, kicked and held for 24 hours laying on the floor while handcuffed and legs tied. This shows that the state was still determined to silence him.

On 2 April during an appeal hearing which was upheld, Bayram said that he was tortured in detention and showed clearly visible bruises around his body, including his face.

He still continued his activism and was also critical of the war that happened in 2020.

Bayram’s lawyer states that Azerbaijani government ignores his applications to start the procedure of bringing his body to Azerbaijani, and application he did on behalf of his family. He states that all the phone calls were ignored and contacting the authorities has been unsuccessful. State then mentioned that investigation needs to be done for the body to be returned.

His death raises many suspicions. The “sandal” statement which was given to his friends was later changed to “shoe”. This doesn’t make any sense, why would he throw himself into the cold water while he was fully clothed in bad weather?

Why didn’t coast guard try to save him or stop him from swimming further? Why did Azerbaijani media rush to report it as suicide?

And also, how did he manage to leave his home during curfew hours and reach the shore without being stopped police, especially in a police state like Turkey?

Bayram was also recently detained in Istanbul airport and questioned for an hour by MIT (national intelligence agency of Turkey). What was the reason for that?

Why did he disappear on 2nd of May while it was said that his body was found after an hour of drowning on 4th of May?

His friend recently reported that Bayram’s phone was left in at home and he woke up from alarm clock of Bayram’s phone. Why is that?

Police stated in the official statement that his body was found far from the place of drowning while the reality is that it was found and retrieved in the same place, according to witnesses that saw the retrieval. Why did police state otherwise? And if the statements of police are really true, then why don’t they release the CCTV footage to prove it to the public?

Why is his death already ruled as an accident before releasing autopsy report?

He was planning to go to Baku 3 days after his disappearance. Is it a coincidence that he died just before that, especially after all the other red flags?

We all know that let it be a murder or suicide, his death is political and caused by the same people who tortured him and falsely imprisoned him. We all know that state killed him either way.

We will protest in front of Azerbaijani embassy in The Hague.

Answers to all of the questions

To know what really happened

Ending the state repression, imprisonment and assassinations of our political activists.

Release of the autopsy report

The state to stop creating barriers to his family from bringing Bayram’s body to Azerbaijan for burial.

The Forest Occupation Movement in Germany