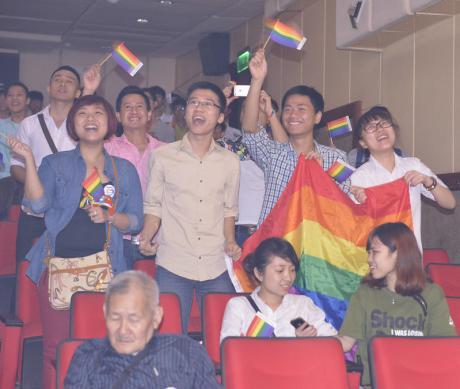 Western leftists, communists, and anarchists alike routinely call for “unity” with the authoritarian oppressors in their favourite “socialist” states. They value a cheap, doom to end in failure unity with the statists, the genocide deniers, the red fascists, more than the well-being and liberation of marginalised groups.

On the list of candidates for Vietnam’s 14th National Assembly election, an unexpected name is the new front-runner: Lương Thế Huy —​​​​​​​ a 33 year old activist —​​​​​​​ becomes the first openly gay Vietnamese to campaign for a parliamentary seat. As Vietnamese anarchists, we consider this a bittersweet development, and tentatively offer Mr Huy our critical support.

Don’t denounce us as pseudo-anarchists shilling for politicians just yet. Our critical support for Mr Huy does not equal a belief in reforming the system, and is specific to the socio-political context of Vietnam. Let’s examine the fight for partial freedom in Vietnam, and what revolutionaries can pick up from the liberal political theatre to build our own programme.

Lương Thế Huy is the President of Institute for Studies of Society, Economy and Environment (iSEE), a well-known science and technology organisation in Vietnam. iSEE has conducted many valued researches into the living conditions of marginalised groups in Vietnam, as well as organised several campaigns for policy-change in favour of minority rights. Their researches and activism shed a needed light to the plight of Vietnam’s most marginalised communities. One stark example is iSEE’s long-running “Tôi Đồng Ý” ​​​​​​​(“I Agree”​​​​​​​) campaign, which calls and lobbies for the legalisation of same-sex marriage in Vietnam.

Then why do we find Mr Huy’s nomination bittersweet, and by no mean a victory for Vietnam’s queer community?

From an anarchist perspective, marginalised people participating in the state apparatus cannot bring any long-term changes. Similarly, goals of diversity and inclusivity do have their use, but they won’t dissolve the oppressive structures of our society.

Politicians like Mr Huy and liberal institutions such as iSEE are oftentimes learned and resourceful, sometimes with noble and lofty ideals. They may even believe in changing the system from within. But history has proven time and time again that one does not change the system; rather, the system chews up passionate, righteous people, and spits out power-hungry monsters devoid of revolutionary elements.

Let’s also not forget that Vietnam’s LGBTQIA+ population is extremely diverse, with individuals from all social classes, ethnic groups, and political and legal backgrounds. Even within the community, there are queer conservatives and nationalists shouting down the most moderate changes, for the sake of tradition and national unity. They blame discrimination against queer people on the “bad ones​​​​​​​,”​​​​​​​ for being too vocal, too demanding, too other, too queer. They hold an almost religious faith in the state, believing that their benevolent “socialist”​​​​​​​ government is going to press a button and eliminate all injustices and inequalities. Their non-queer comrades, however, reacted quite strongly when they caught wind of the fact that iSEE is partially funded by foreign money, including money from the notorious United States Agency for International Development (USAID). Despite iSEE being licensed by Vietnam’s Ministry of Science and Technology itself, the red fascists still hurl slurs, cry “colour revolution,” and barely try to hide their burning desire for queer people to perish.

As anarchists, we reject the meaningless appeal to tradition. We also know that the nationalists and conservatives’ ferocious reaction towards liberal institutes like iSEE is more due to their raging queerphobia, internalised or otherwise, than a righteous contempt for capitalism. Why else would they cheer when domestic and foreign capitalists exploit Vietnam’s wealth of cheap labour and natural resources under the thin camouflage of “socialist”​​​​​​​ development, but have a conniption when the same capitalists invest in the equality industrial complex?

We also have to admit: liberal organisations like iSEE fill an important gap in the absence of a robust revolutionary queer movement in Vietnam. Despite their ulterior motives and counter-revolutionary nature, there is no denying their contribution to uplifting the lives of many marginalised people. This becomes glaringly obvious in the face of a “Western left” utterly apathetic to the struggles of the oppressed in Vietnam and other over-exploited countries. Western leftists, communists, and anarchists alike routinely call for “unity” with the authoritarian oppressors in their favourite “socialist” states. They value a cheap, doom to end in failure unity with the statists, the genocide deniers, the red fascists, more than the well-being and liberation of marginalised groups. With such a hypocritical and incompetent left in the West, it is no surprise that the liberal, capitalist status quo can parade on with their benevolent façade.

Anarchists need to swallow this bitter pill and do better when building our programme. We cannot afford to be apathetic in the fight for partial freedom. To quote Malatesta: “​​​​​​​While preaching against every kind of government, and demanding complete freedom, we must support all struggles for partial freedom, because we are convinced that one learns through struggle, and that once one begins to enjoy a little freedom one ends by wanting it all.”​​​​​​​​​​​​​​1 If anarchists abandon the countless small fights for partial freedom in our showdown for total liberation, then we have already failed our most marginalised and oppressed, and our revolution is not worthy.

For other inquiries: [email protected]

ATMs Out of Order in Solidarity with Anarchist Prisoners