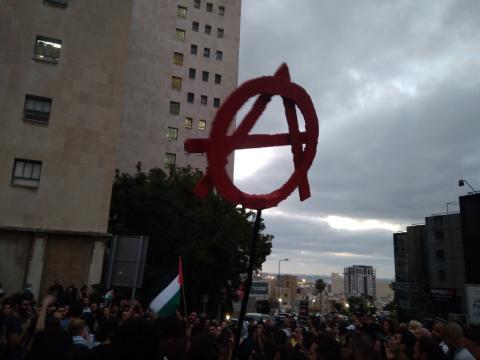 Amid constant and escalating violence against Palestinians, the unfolding Israeli genocidal campaign in Gaza, and the imminent eviction of thousands of people in East Jerusalem, scores of Palestinians across the Middle East have declared a strike. Streets were deserted in Palestinian territories, as shopkeepers shuttered stores in Jaffa, central Israel; Umm el-Fahm, a Palestinian town in northern Israel; and West Bank cities such as Hebron, Jenin, Nablus, and Ramallah.

Anarchists have been taking part in the demonstrations– particularly in Haifa, where a Circle A was displayed at a rally for the general strike. Outside Ramallah, a group of Palestinians set fires on a major thoroughfare and later exchanged gunfire with Israeli soldiers.

This powerful display of solidarity comes as many Palestinians on either side of the artificial boundary between the State and the occupied territories— both of which have been colonized by Israel— recognize that they are subjected to the same system of oppression: one that operates with varying degrees of intensity, but ultimately seeks to expand the power and resources of the Israeli Empire at the cost of Palestinians’ fundamental right to exist.

The apartheid that has persisted in the region for decades has reached a breaking point. In Palestine, as in the world over, people are rising up against colonialism, reclaiming resources, and asserting their willingness to fight for their lives.

Those who wish to express solidarity with the Palestinian resistance and fight back against neocolonialism should take part in this Call to Action: https://twitter.com/submedia/status/1394487934926135303

Via SubMedia on Twitter: “For the week of Monday, May 17th, Palestinians are calling for a week of action in solidarity with the Palestinian uprising and the general strike. Please take action to support the people fighting against apartheid and modern colonialism. #savesheikhjarrah #gazaunderattack”